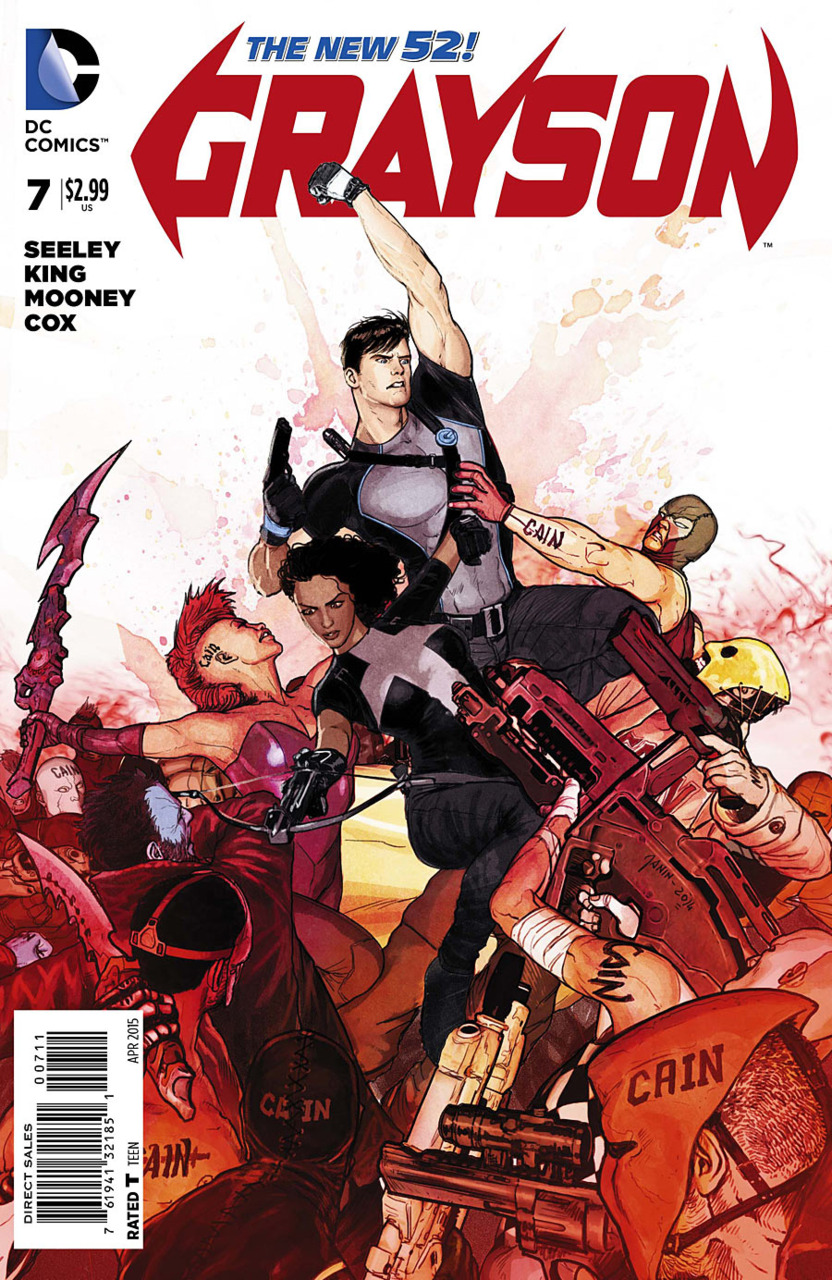 “Sin By Silence” opens with a pair of Jordanian Royal Airforce jet pilots taking about their instruments going haywire as they see a spiral appear on their screens. Meanwhile, unseen due to the disruption being broadcast, Helena Bertinelli flies past the two jets on her way to Tel-Aviv. Inside, Helena and Mr. Minos recap the events of the previous issue where it was discovered that the Fist of Cain had taken possession of the Paragon brain, and intend to use it at a peace summit to cause mayhem and havoc. They also discuss the disappearance of Dick Grayson and Minos informs Helena that Doctors Netz and Ashemoore are searching for Agent 37. Helena suggests synching up their hypnos implants so she can see what Dick’s hypnos are broadcasting…Ashemoore makes the connection and Helena sees that Dick has been imprisoned somewhere and is fighting against his captors. She also realizes that the hypnos have been implanted in another person…which she discovers is Midnighter. Helena suggests uploading the information that she gained from Macabre (in the last issue) into Dick’s hypnos in order to convince Midnighter of the severity of what is going on.

Meanwhile up in The Garden, Dick continues to try and break out of the cell he is imprisoned in as the Gardener informs him that she will be letting whatever happens in Tel-Aviv happen. Midnighter will remain loyal to her as he sees her as a mother figure.

At the peace conference, Helena finally arrives as Ashemoore informs her that she is ready to transfer the information to Midnighter. As she does so, we see both Midnighter and Helena reel in severe pain as their hypnos implants are linked together. Dick tries to persuade Gardener that she needs to let go of her hate, just as he did after his parents died. We can then see Midnighter demanding to have a door to Tel-Aviv so he can stop what is about to happen…he believes that Dick was telling the truth.

We cut back to the peace summit where the band Sin by Silence is playing in front of a huge crowd. As they finish, their lead singer Clutch begins to speak to the crowd as he gestures to a glowing peace orb above his head. Helena realizes too late that Clutch and his band are a part of the Fist of Cain, only to have it confirmed when Clutch removes his gloves and one can see “Cain” tattooed on his knuckles. Clutch then grabs the orb and begins shouting about the hatred and murder within every member of the human race. The Paragon brain is clearly inside the glowing orb.

As the crowd begins to descend into anarchy, being influenced by the negative persuasions of the brain, a portal opens and Midnighter and Dick rush onto the field. Dick tells Midnighter to deal with the crowd while he gets the brain away from Clutch. As Dick vaults towards the stage, he encounters an enraged Helena who tries to stop him. She momentarily gains control and explains that because Dick has never killed anyone and has no hate inside him, the brain cannot affect him. She quickly kisses him and regains more control of herself, as she jumps into the crowd Dick continues on to the stage. As Midnighter fights against some of the people he grabs up a knife and hurls it in an attempt to kill Clutch…Dick however blocks the attack and shouts that there won’t be any killing.

Dick then begins to attack the different members of the band as he berates them in regards to how they have ruined his music for him – one of their songs is on his workout playlist, as well as another being a song that he skated to alongside Barbara Gordon. As the battle continues, Helena gets knocked down by a man she seems to recognize but he is quickly shot by Minos who seems to have arrived to join the fight.

The monologue then switches to Dick describing how he almost gave into the hatred spewing from the Paragon brain and smashing it upon the stage, he reveals that instead of smashing it he thought about his family and the other people that he loved and it somehow changed the brain’s mind. Dick can then be seen sitting in his room at St. Hadrian’s finishing his report to Batman.

We then cut to Minos’ office where he discusses the outcome of their mission with Helena and Dick. Since they have successfully stopped the Fist of Cain, they can return to dealing with Checkmate. As Dick and Helena leave, the two discuss what happened during the fight and Helena admits to not remembering much of what happened. Dick asks if she remembers kissing him, and Helena quickly blows it off as a joke.

The issue closes with Midnighter having returned to the Garden and informing the Gardener that he won’t be blindly following her orders anymore. She protests that she did it to protect her children and make the world a better place. And the last panel is of Midnighter leaving the Garden and stating that “I’m not going to destroy you. Not today. But, remember what I do Gardener? I see what’s coming. And what isn’t coming? A better world.”

I think it is safe to say that “Grayson” has successfully completed its first story arc and I can say that I am thoroughly impressed. Even with a couple rocky issues in the middle with Dick running around with no shirt, I really enjoy picking up this deceptive spy thriller each month. Although I am not a fan that the rest of the Bat-Family has no knowledge that Dick is still alive, I like the fact that he isn’t bound to what is happening in Gotham City and can explore the dark corners in the rest of the DC Universe.

I will admit that the Paragon story is still a little confusing. Not all of the questions regarding it were answered…the Gardener hinted that she created Paragon but its true origins and purpose are unknown. Maybe this is something that will be revealed in the coming issues where Spyral takes on Checkmate?

I am also intrigued about the status of Midnighter after this issue. Now that he has seemingly severed ties with Gardener will he team up Helena and Dick more often? Or will he become some sort of free agent that still opposes them? No matter, I hope that Midnighter continues to be a presence within this book as I think that he brings an interesting dynamic to Dick and acts as a worthy adversary/interesting ally.

Overall this issue was filled with lots of action, as well as interesting story points that I hope get explored as this book develops.