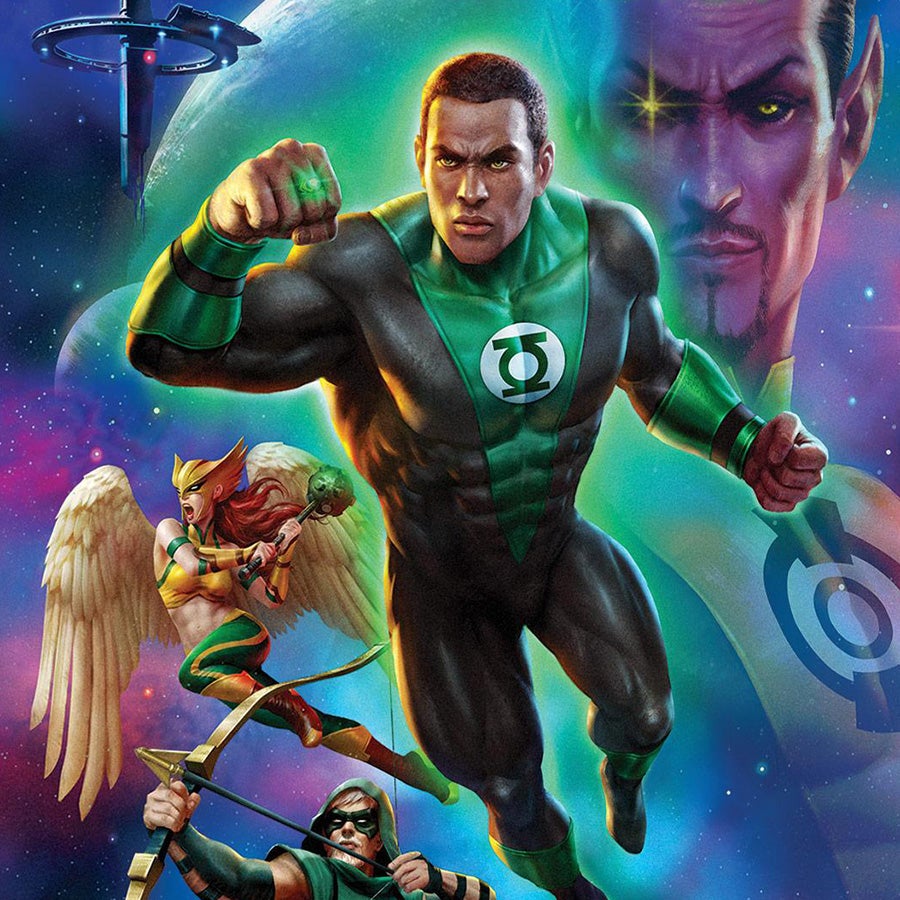 Overview: In Green Lantern: Beware My Power, John Stewart’s origin as Green Lantern is the focus of this DC animated movie that is set in the same continuity that began with Superman: Man of Tomorrow.

Synopsis (spoilers ahead): Green Lantern: Beware My Power opens with John Stewart having PTSD from his days as a Marine. On his way home, he beats up some thugs who were giving a homeless man a hard time. He is about to be arrested until the police find out he has won the Medal of Honor. They let John Stewart go. As he gets home, Ganthet from the Guardians of the Universe crash-lands and gives John a Green Lantern ring. John is confused and doesn’t want the ring. He asks the ring to take him somewhere to get rid of it. The ring takes him to the Justice League satellite.

Vixen, Martian Manhunter, and Green Arrow are the only members there and ask John where he got the ring and who the previous owner was. The ring says it belonged to “Hal Jordan.” Green Arrow is worried about Hal and decides to go with John to the planet Oa and find out what happened. When they get to Oa, they see many Lanterns have been killed, and the Guardians are nowhere to be seen. At this moment, Hawkgirl arrives and fills them in on how her home planet of Thanagar has been engaged in a war with the planet of Rann.

Hawkgirl fills them in on the backstory of what was supposed to be a peaceful demonstration of a Zeta-Beam in which Hal Jordan was supervising. The beam went haywire, and Hal was unable to contain it. Thanagar took it as an act of war and has been battling Rann ever since. John, Green Arrow, and Hawkgirl come across Adam Strange of Rann, and he says that the Zeta-Beam project must have been tampered with.

The group then figures out a pattern of Rann/Thanagar attacks and tracks it to a base. The base is the headquarters of former Green Lantern Sinestro and his Sinestro Corps. The group of four is easily overwhelmed, and John gets his ring taken away. While locked away, they find that Hal Jordan is still alive and being held captive. Hal explains that it was Sinestro that caused the Zeta-Beam disaster and that he sent his ring away before Sinestro could take it from him. The group escapes their cell, but on the way to a ship Hal brutally kills one of Sinestro’s men, which Green Arrow finds shocking.

John is able to summon his ring back to him, and the group heads to Rann to try to stop the war. Hal takes off to the Zeta-Beam while Stewart, Hawkgirl, and Green Arrow battle the Sinestro Corps. After losing his ring and with Sinestro about to kill him, John summons his ring back, but in doing so, it flies through Sinestro and kills him.

Hal kills the leader of Rann, and it is revealed that when Sinestro confronted him after the first Zeta-Beam attack , he infected him with the Parallax bug. They were the ones who destroyed Oa, and Hal took all the rings from the dead Lanterns (Emerald Twilight!). Parallax Hal has set the Zeta-Beam to destroy Thanagar and Rann and will use it to rewrite the universe in the way he wants it.

John and Hal battle it out while Adam Strange sacrifices himself to stop the Zeta-Beam. John is able to get all the rings back from Hal and sends them off, refusing to kill Hal. Hal still has power from the Parallax bug and is about to kill John, but Green Arrow puts an arrow through his chest, killing Hal to save John.

Green Arrow laments how he had to kill his best friend but knows there was no other way. Hawkgirl brings John and Arrow back to Earth and lets John know that Thanagar needs Green Lantern to watch over them. John and Green Arrow decide to go grab a drink as John is now ready to carry the mantle of Green Lantern.

Analysis: For a generation of comic book fans, like myself, John Stewart was the Green Lantern that we had on television thanks to the Justice League animated series. It was John on television and Kyle Rayner in the comics, not Hal Jordan. This movie took a bit of a twist for me because I expected it to be just a straight John Stewart origin and not a Rann/Thanagar War movie or an Emerald Twilight movie.

In some way, adapting those stories hurt the development of John Stewart because he had to take a backseat. The movie started and finished strong, but in the middle, it felt like John, Green Arrow, Hawkgirl, and Adam Strange were flying in a spaceship to different planets.

Speaking of that Justice League animated series, one of the best parts of that show was the relationship between John Stewart and Hawkgirl, and it was great to see a bit of a tease of that relationship at the end. As a fan, you know it’s coming because you can’t have John and Hawkgirl in something together and not mentioned, but it was okay because they are a great couple in that show.

Aldis Hodge was the voice of John Stewart in this, and even though he is playing Hawkman in the upcoming Black Adam film, which I am very excited for, I think he would make a great live-action John Stewart. Hodge did a great job of being conflicted about being given this power and responsibility of being a Green Lantern, but slowly, as the story went on, he started to assume a leadership role within the group.

This movie was a unique addition to this new set of films from DC Animation. A strong start and strong finish save it from the lull in the middle, and overall it is a solid watch. It’s great to see a film that puts John Stewart back at the forefront of Green Lantern lore.

Editor’s Note: Green Lantern: Beware My Power is now available on Digital HD, Blu-ray, and 4K Ultra HD. You can order your copy and help support TBU in the process by heading over to Amazon.

Green Lantern: Beware My Power isn't the strongest DC animated film, but it does have a few surprises up its sleeve. It's also great to see more of a focus on John Stewart.