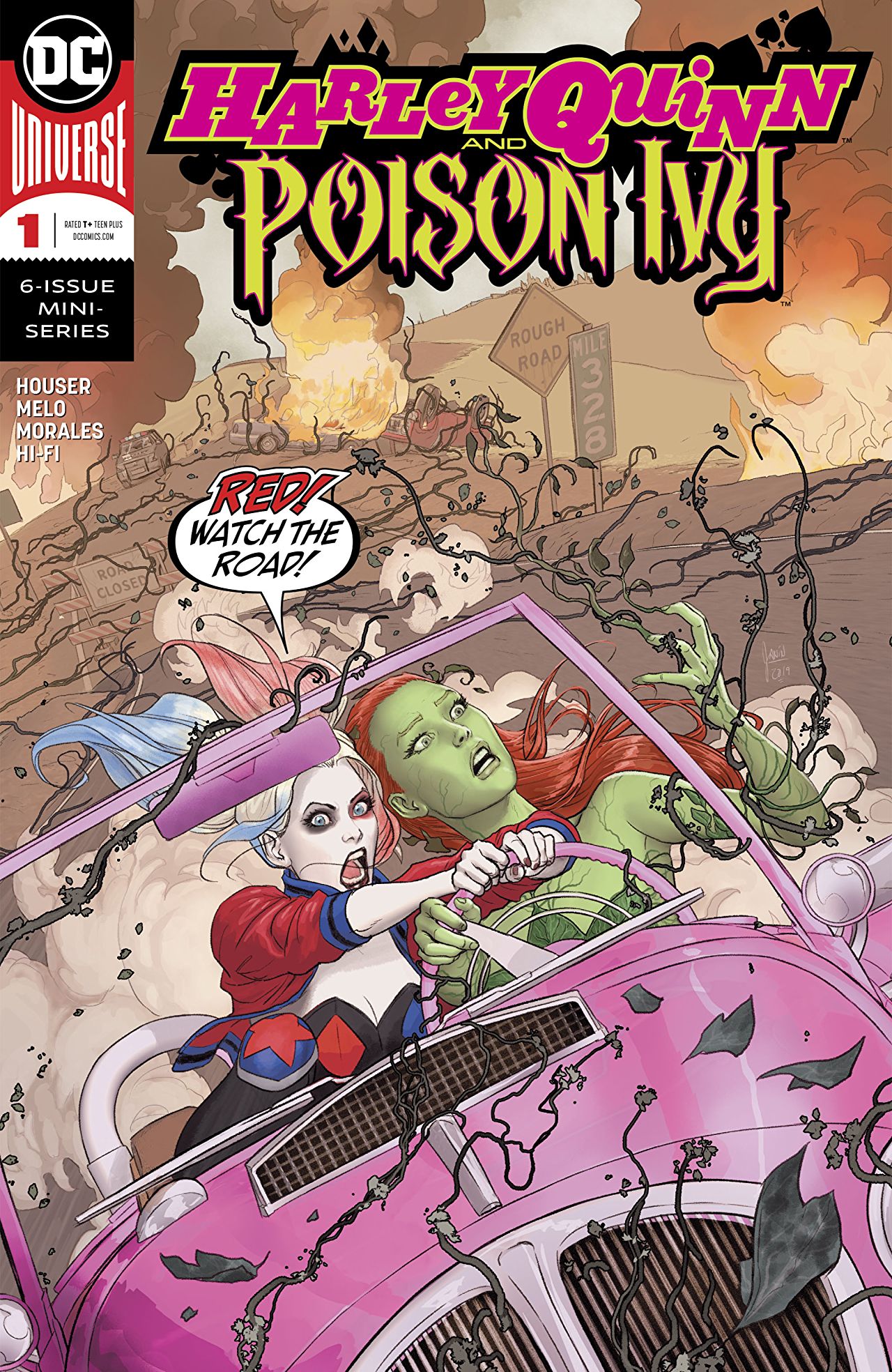 Overview: Lying low after the events of Heroes in Crisis, Harley Quinn and Poison Ivy find themselves unwillingly called back to service when the Floronic Man comes knocking at their door.

Synopsis (spoilers ahead): Our story starts in a suburban shopping mall where Harley Quinn and a recently reborn Poison Ivy (see the event of Heroes in Crisis) are enjoying a meal in the food court. Harley, concerned for her recently resurrected companion, does everything she can to pamper and rekindle Poison Ivy’s spirit, hence the small visit. When Ivy’s newly grown plant body collapses into a pile of leaves during a subsequent shopping spree, Harley scoops her friend into a shopping cart and high-tails it home.

Ivy is having a difficult time maintaining her form, and this is frustrating for Harley, who has spent many days since the events of Heroes in Crisis ensuring that Ivy has peaceful surroundings conducive to learning how to handle a new body. Plenty of light. Plenty of quiet. Plenty of water and houseplants.

Back at their suburban home, Harley rummages through the basement for a gift Lex Luthor sent for Ivy during last month’s Year of the Villain offers. Since nothing else has worked, Harley figures maybe this might help. She delivers the gift to Ivy, and the two open it to discover that it’s fertilizer “with a little something extra.”

Sometime later, Harley trudges back to her room upset that Ivy received a gift and not her, that her life is quiet and boring, and that she fears her years as a terrifying supervillain are long behind her.

Meanwhile, Ivy transforms. She’s able to stabilize her form now. She informs Harley that she feels caged in their suburban home and needs to grow elsewhere. Harley confesses that she’s been feeling the same way. With the world the way it is with the events of Year of the Villain, Harley presents the idea of Ivy and herself going out on their own as heroes.

Before Ivy can respond, the plants in their home suddenly explode out of their pots and start attacking the pair, coiling around their arms and legs until they can no longer move. The front door bursts open, and the Floronic Man, newly endowed with the powers of the Green (see Justice League Dark Annual #1), marches in. He came for Ivy, citing that she will be of use in his conquest over the Parliament of Flowers.

Analysis: The art in this issue is absolutely gorgeous! Artist Adriana Melo captures the lighter, more playful tone of Jody Houser’s dialogue in her character designs and expressions perfectly. For a setup and plot driven almost entirely by dialogue and internal monologuing, Melo plays up the expressiveness of Harley Quinn to where we can absolutely feel the love, compassion, and concern Harley expresses written in her eyes. It’s definitely the driving factor in a comic book where not really much happens.

This isn’t to say Harley Quinn and Poison Ivy #1 is bad. It’s not. Rather, this book is so tethered into the events of other DC titles, much of its efforts in this beginning issue are spent recapping and placing characters on a greater DC timeline. Callbacks to Heroes in Crisis and Year of the Villain fuel this new status quo for Harley and Ivy. Writer Jody Houser fits in humor and quips where she can, and she succeeds in creating an upbeat, lovable tone that has potential. We just need to be patient. The issue’s ending with the Floronic Man is enticing, and one hopes that all this setup will coalesce into an entertaining ride.

Final Thoughts: This is a decent, fun, and colorful start to a miniseries that aims to tether itself to the greater DC canon. It has potential, and we’ll have to wait and see where Houser and Melo’s ambitions ultimately land this miniseries.