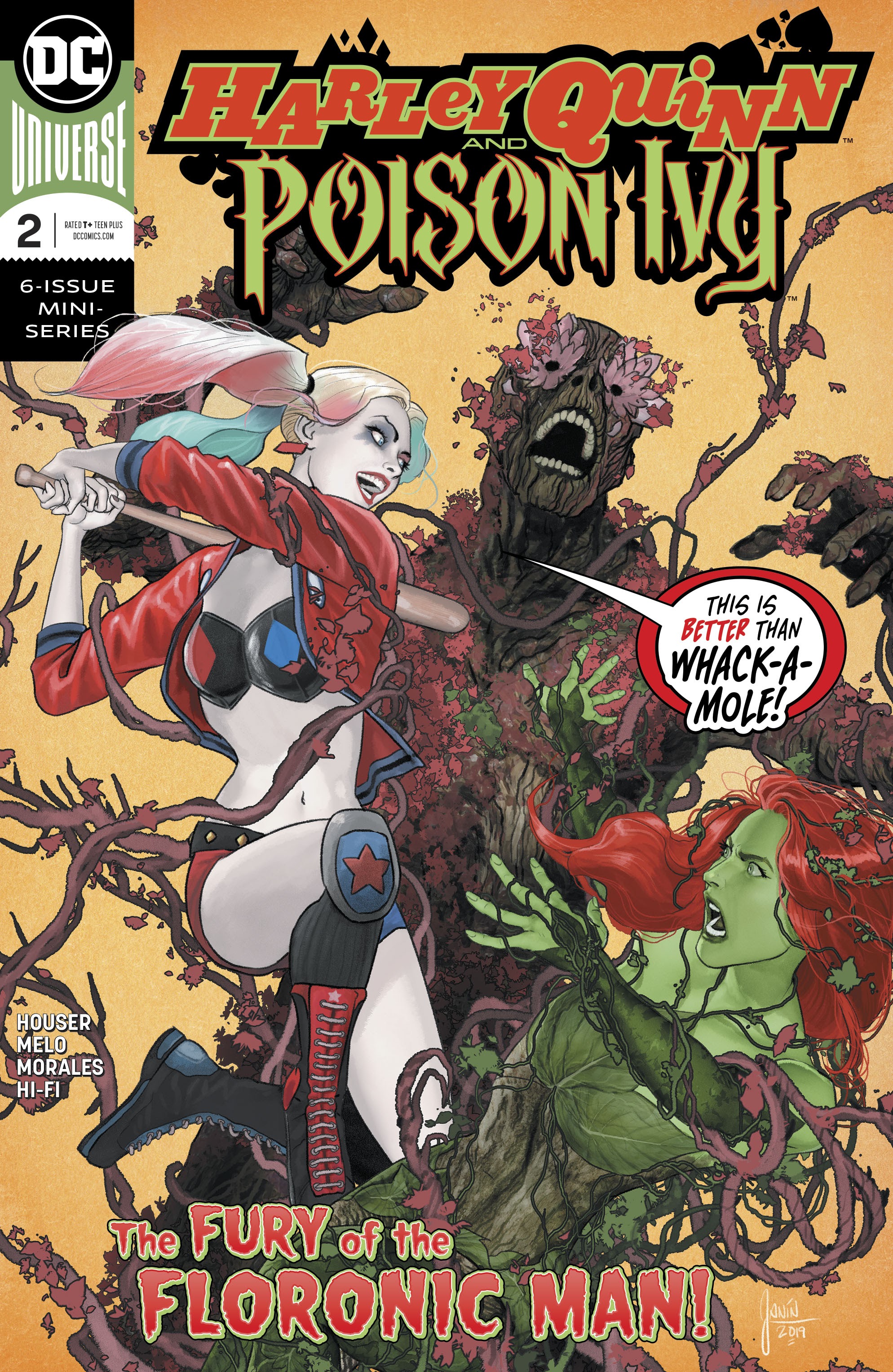 Overview: Before Harley Quinn and Poison Ivy seek out someone who can help Ivy restore her memories, the duo must face the Floronic Man.

Synopsis (spoilers ahead): This second issue picks up moments after the ending of the last one. Harley Quinn and Poison Ivy are now captive to the Floronic Man in a sleepy suburban hideout. Their captor informs the pair of his desire to consume Ivy and use her powers to control the Parliament of Flowers. Before the Floronic Man can make good on his threat, Ivy musters her strength and transforms her body into sharp thorns. The bonds slice open, and Ivy and Harley are free.

The pair tag-team the Floronic Man, but all is not well. Floronic Man seems to have the upper hand again, as Ivy is weak; she can’t fight for long. Thanks to some forethought referenced in a brief flashback, Harley remembers to activate a previously installed home security device that torches the Floronic Man. The clown princess of crime picks up her friend and flees the scene.

Harley drives to a nearby park where the two rest. As the two talk about the battle they almost didn’t escape from, Ivy admits that she doesn’t remember it. Her mind is going, and she’s having a difficult time retaining memories. Harley reluctantly confesses that despite everything she’s done to heal her newly reborn friend, Ivy needs more help than Harley can provide.

Because of the events in Heroes in Crisis, Harley doesn’t trust any do-gooders to heal Ivy. She can’t trust the bad guys, either (Exhibit A: The Floronic Man). However, she has a fellow Arkham Asylum inmate in mind who could help solve their dilemma.

Harley beats her way through underworld henchmen until she’s given the address of a closed, suburban mini-golf course. It is here that the pair run into Mad Hatter. Harley tells their story to Hatter, ending the summary with a plea for help. Hatter confesses that he doesn’t know if he can help. Harley counters with how she’s seen him work wonders with other metahumans. Then Hatter says, “If you’ll believe in me, I’ll believe in you.”

Later, Harley and Ivy find themselves alone. Harley confesses that she’s having second thoughts. Ivy says that out of all of the old crowd they used to run with, Hatter is the best at reprogramming minds.

Meanwhile, Mad Hatter walks into a secret storeroom. He’s talking to someone, saying he found an “Alice” for himself and a “wildflower” for… some sort of small plant?

Analysis: There are some great full-page spreads and panels in this issue that continue to prove to be the best part of this series. Paired with wonderfully bright and rich colors by Hi-Fi, Adriana Melo’s art, overall, is beautiful and inspiring. Melo is exemplary when it comes to bringing out the soul and emotional resonance in a character’s facial expressions and eyes, and these moments where she can explore the expressiveness of the characters are a high point.

Unfortunately, the same cannot be said of the action panels. In the few panels where Harley and Ivy battle the Floronic Man, the action shots lack intensity and momentum. The action is rushed and proves confusing to follow. There’s a recurring disconnect between action panels that can cause readers to lose focus, and distort the placement of the characters and what exactly is taking place. This is most problematic with the Floronic Man, whose placement doesn’t seem to match the barrage of attacks laid upon him.

Having said that, page fifteen’s full spread of Harley beating her way through a harem of hoodlums is gorgeous and amazing to take in. It’s worth flipping to this page alone and promptly closing the book after.

Why? Because this story is treading water. The last issue ended with the Floronic Man arriving and setting up what felt like a long narrative about the Parliament of Flowers. This issue, that cliffhanger ended in eleven pages. Our protagonists are road-tripping, but other than this potentially being a vehicle to “fix Ivy’s brain” after the events of this issue, there’s no clear indication of where this story is going. Last issue, Ivy’s problem was her inability to maintain her form, which was seemingly fixed with a gift from Lex Luthor? This issue, she’s succumbing to memory loss. There doesn’t seem to be much connecting these problem-solution type scenarios in an overarching storyline.

Furthermore, this series feels like it will be six issues of loosely tethered villain cameos, which is worrisome. Let’s hope that that assessment is wrong.

Final Thoughts: It’s unclear if this miniseries intends to have a story with legs, or if it’s just a best friends road trip filled with forced appearances from characters we remember from better books. Time will tell.