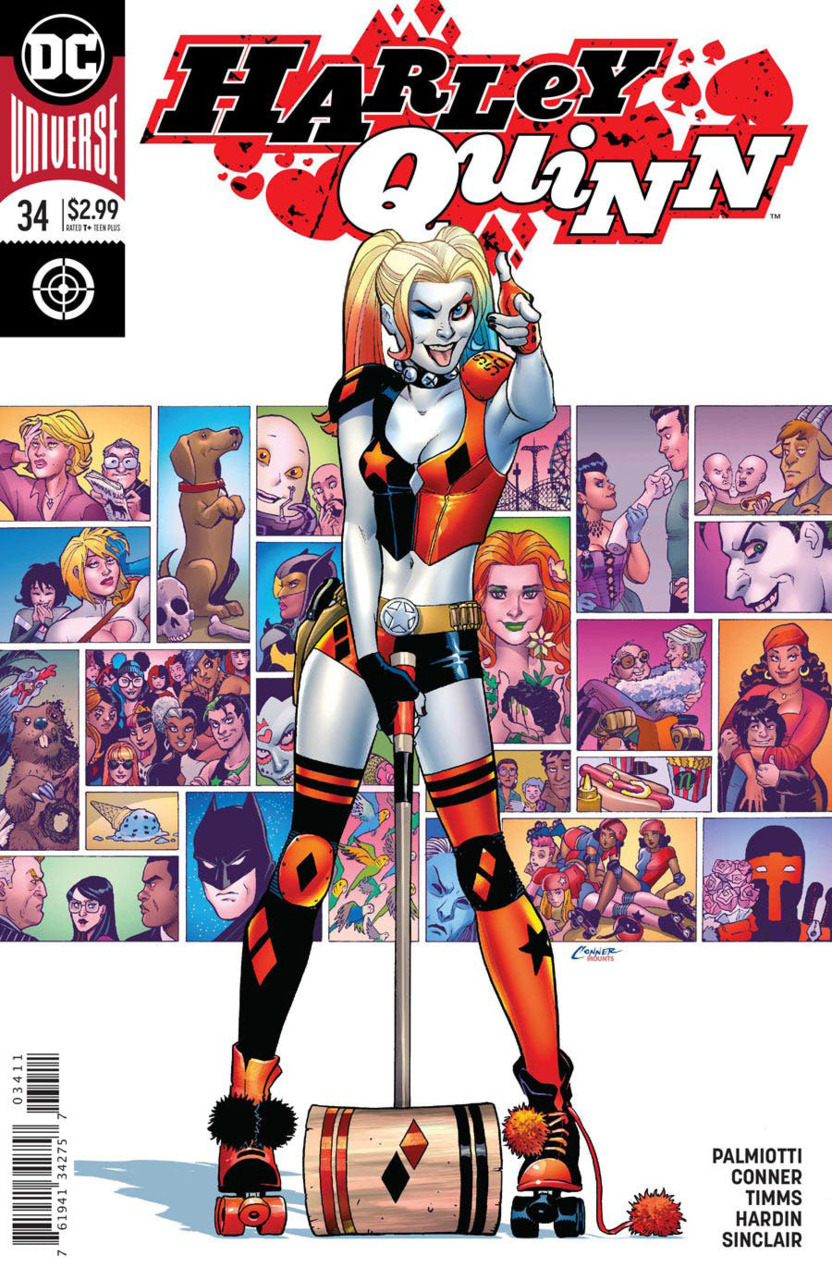 Overview: Harley and Ivy get bailed out of jail and hi-jinks ensue with a series of incidents including one to meet Jimmy Palmiotti and Amanda Conner!

Synopsis (spoilers ahead): Following a pit-stop in their road-trip to Flordia, Poison Ivy and Harley get into a bar fight in the ladies bathroom, following Ivy’s coerced attempt to win a karaoke competition. Harley’s parents come to bail her out (one of the best jokes this issue was Harley saying she wasted her phone-call from jail to prank-call Redtool) and Ivy and Harley go over to their home for a bit of R&R.

Harley’s rambunctious brothers are also there on vacation, and Harley’s mom asks Harley how she is doing following Mason’s death – she knows Harley’s habit of taking the blame for events that she couldn’t control. Meanwhile Ivy has put the noisy boys to sleep with her sleepy lipstick. Harley takes the chance to go see her lovable pooches, her two hyena’s Bud and Lou. On investigation she is thrilled to find out that they have met lady hyenas and had puppies! Harley at first dreams of taking the puppies back to Brooklyn, but Ivy makes her realize that they belong with their parents.

Harley and Ivy leave Harley’s parents, and Ivy takes Harley to a certain residence that of the title’s writers, Amanda Conner & Jimmy Palmiotti! Harley grabs her mallet and busts into the home. Harley goes very meta as she confronts both the writers her title and then she wakes up after Amanda tells her she will “break duff.” Harley then wakes up on a boat with Ivy and they toast to memories, laughter, and love, as the sun goes down.

Analysis: The climax to this Harley Quinn run has been approaching for a while. The road-trip was really an exit, an escape to a simpler life for Harley and Ivy. It’s noticeable how Harley’s supporting cast (for so long a feature of the book) has been thinned out. On this trip alone Tony and his partner drift away. Finally it is Haley and Ivy who are left on the boat, toasting to a different future in front of a beautiful dying sun.

For the many of us who have stayed with Harley, Jimmy and Amanda through their long run (which began in the New 52 through to Rebirth) it’s been such a pleasure to read, supported by the strong art of John Timms, Chad Hardin and many others. It was a particular pleasure to see Harley “go meta” because this is a title that has danced around such topics, and the points Harley made on the large supporting cast, the shift away from being the sidekick off the Joker, and other such character development, has been hallmarks of this run. Harley has grown and changed in her own unique way. It’s always amusing to see a character like Harley show some awareness of her evolution, and it does fit in with her psychiatric background.

Some comments should also be made of the way Harley and Ivy’s relationship has grown and been shown in a such a positive light through this run – in mainstream Big Two Comics Harley and Ivy have shown to be a great positive LGBT couple and it’s been played with laughs, sensitivity and heart.

Final Thoughts: A classy, funny exit issue for the Conner-Palmiotti team. This has been a landmark run for Harley, which has both deepened the world and inner life of the Harley Quinn character. With it’s dramatic turns, busy storylines and innate sense of fun, Harley Quinn has remained one of the premier books in the DC line for years now and can only wish the departing creative team a fond farewell while wishing the incoming team all the best! It’s been a good time.