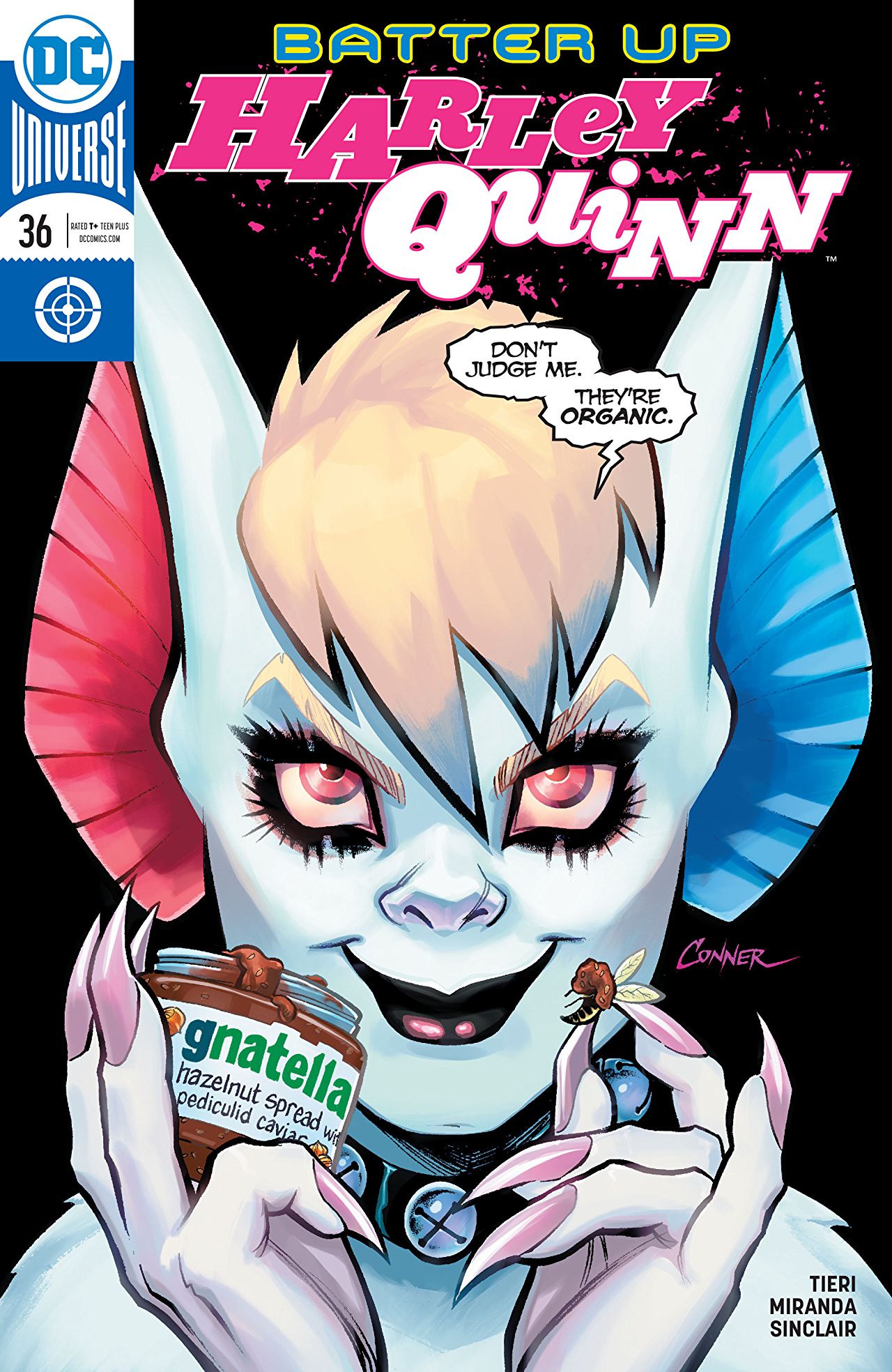 Overview: After being injected with the Man-Bat formula, Harley-Bat battles against the Gang of Harleys, as the rest of the gang tries to locate the serum to free Harley and Tony from the effects of the serum.

Synopsis (spoilers ahead): In the aftermath of last issue, Harley has been infected with the Man-Bat serum and she seizes the body of a teenage punk on Coney Island, before dropping him on the Gang of Harleys! Together they try to rush tackle Bat-Harley but she is too strong and doesn’t seem inclined to remember her friends! Meanwhile, Red Tool, Goat Boy, Eggy, and the rest of the gang are going around Kirk Langstrom’s old hideouts, in an attempt to find where his wife has hidden Tony. They find Tony, who quickly goes rabid Tony-Bat, before Langstrom manages to inject him with the antidote, shortly sfter he strangles Goat Boy!

In the meantime, Harley-Bat finds her way into Natemans, where her usual appetite resurfaces and she starts sucking down an almost obscene amount of hot dogs! One of the Gang of Harley’s tries to pacify her, but as she goes to do so, Francine, Kirk Langstrom’s wife, also in bat form, turns up!

Tony is meantime cured but Langstrom slips himself the Man-Bat serum and flies off out the window. Spoonsdale, who released Kirk into their care, is going to kill them.

Back at Natemans, a puzzled Harley-Bat looks on as Francine tears into the Gang. When Francine starts raving on about how she will turn the whole gang into Bats, and then all of the Coney Island itself, Harley-Bat finally triggers that her friends are being attacked. She engages Francine in a vicious one-on-one, coming out on top as Red Tool inject the antidote into Harley-Bat.  She metamorphoses back into the body of normal Harley.

After the action of all these events, Harley goes to meet with Frank-Frank the next day, and she confesses her need to get away from people, to be left alone. The danger that is targeted at Harley spills out onto her friends and she is worried that will never change while she is with them all – the action cuts to the gang reacting in disbelief now that Harley has split. However, one of the gang has suspicions that there is more to this seemingly random attack by Francine Langstrom than meets the eye…and her suspicions prove justified when we cut to the Penguin himself, who has a cunning plan to seemingly destroy Harley and the gang.

Analysis: The second issue in Frank Tieri’s Harley run crackles with energy and intent. There is a slightly tougher edge to proceedings, Harley-Bat is a rabid creation who lashes out at her friends – the safety catch feels off, and that is starting to feel like a good thing. Beyond the seemingly simple storyline of the transformation via the Man-Bat serum, there’s a deeper story at play, and not just that ion the Penguin’s big stakes game where he is the would-be puppet master. The deeper story is one of the challenge Harley herself faces, as a character in this story. The gang which surrounded her throughout the previous run, even the character of Frank-Frank himself, are all a buffer – with the loss of Mason and the introduction of significant loss to Harley, a failure to save one of her own, suddenly Harley seems to feel the obligation of the extended family she has built around herself. It’s a cool story beat and there is a genuine sense of mystery as to where Harley will be running to. Thankfully, she did take her beaver!

The Inaki art is very fluid in this issue, a darker edge crackling across every page, in sync with the author’s intent. Harley has an almost punk-waif thing going on in the scenes where she is human again, and its effective and powerful. The scenes at the end with Frank-Frank looking out at the scattered crowd is an emotional beat in what is sometimes a screwball comedy comic. It sets up an interesting turn for the Harley Quinn book, one that I am very much looking forward to continuing to follow.

Final Thoughts: An excellent issue in a series that is building fresh momentum in the Tieri-Inaki run. This title is definitely still hot and one to watch!