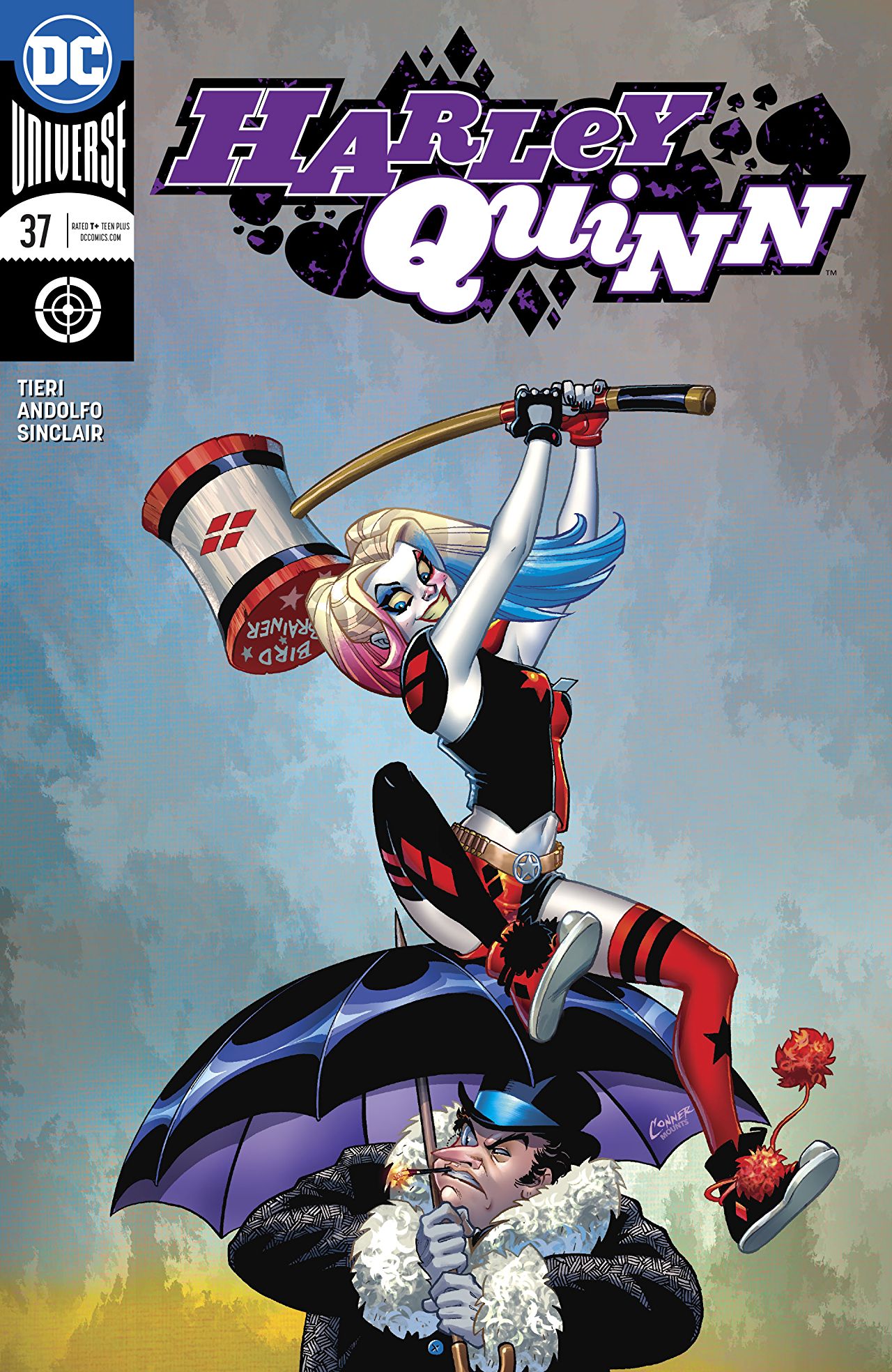 Overview: Harley is pimping her enforcement services as Harley for Hire, a hero helper around NYC, as the Penguin expands his operations to the city!

Synopsis (spoilers ahead): Harley has put out an advertisement for her services as kind of “hero for hire” (although DC are careful not to say that precisely) – she bills herself as “Harley for Hire’! There’s a nice cameo of Catwoman (in a tree), who is there as Harley shoots the video. Meanwhile, Harley’s friends are on the couch watching the ad in amazement. They realize something is up.

Meanwhile, the Penguin is moving into New York City. The NYC mob bosses turn up to welcome him (strangely at a beach in Brooklyn) but are disconcerted to discover that Penguin has plans to move to NYC, along with his crime operations! The mob bosses pull their pieces on Penguin, but he clicks his fingers and Maurice and Perry, his huge mutated penguins, eat the mob bosses!

Harley is meanwhile trashing a couple of creeps without much mercy, in the middle of a House of Glass! She’s charging and leaving behind a trail of mayhem! Spoonsdale appears, warning Harley that it’s Godfather Part 2 following the death of the mob bosses, all while Harley is fighting off a string of callers who want to know if she’s an escort or available for bachelor parties!

Penguin is in the meantime addressing a veritable rogues gallery, as they discuss the takeover of NYC and Coney Island in particular. We see Riddler, Mr. Freeze, Killer Croc, Mad Hatter, and others, in the room as Penguin addresses the rogues. Penguin is turning particular attention to Killer Croc, who does have a history with Harley in the Suicide Squad. But Killer Croc appears to have no qualms about that, and he has his own plans for Coney.

Harley meanwhile is starting to feel lonely in her apartment all by herself, with just her stuffed beaver for company. Frank Frank offers some relief over the phone, but it’s obvious she’s isolating herself and starting to feel the absence of her friends. Red Tool, her resident friend/stalker, is outside her window, and in his own creepy way explains that her friends will be around, whether Harley likes it or not.

Analysis: Harley Quinn is a title at an interesting place with the change in creative teams, and it’s to Frank Tieri’s credit that he’s picked up the baton from the Palmiotti/Conner team with such aplomb. There’s a genuine pathos to Harley’s separation from her friends, which as we know comes from her guilt over Mason’s death and the way her friends get entangled in her problems.  With the clouds hanging over Coney Island, and Killer Croc targeting the district, it’s obvious that Harley’s friends will continue to be in the firing line just due to their proximity to the upcoming action.

In the meantime though, let’s talk about how putting Harley at a degree of distance from a web of interpersonal relations (that was a hallmark of the former run) is also giving her character room to breathe, a character that has picked some much independent energy and momentum in the years since New 52 when she has essentially ditched the Joker for her own future on her own terms. I found the art in this issue extremely consistent and good – there’s a touch of the cartoony to the storytelling which blends well with in what is in essence a comedy-action title. There’s an edge to this art which makes the title both compelling and fun.

When looking at the future for Harley Quinn and speaking as somebody who has read literally perhaps the last 50-60 issues, if not more, readers should definitely feel in safe hands with this creative team – while also enjoying that extra thrill of a slight element of change and progression which is so vital to the energy of storytelling inside a serialised book. Given that this title comes out fortnightly I’m sure we can expect a good deal of fast paced movement over the next few months.

Final Thoughts: This is a slick, fun issue which foreshadows a looming threat to Harley and Coney Island, while also maintaining Harley’s distance from her friendship circle. The plot developments are intriguing with a slightly more adult edge to them. All in all, a very strong book.