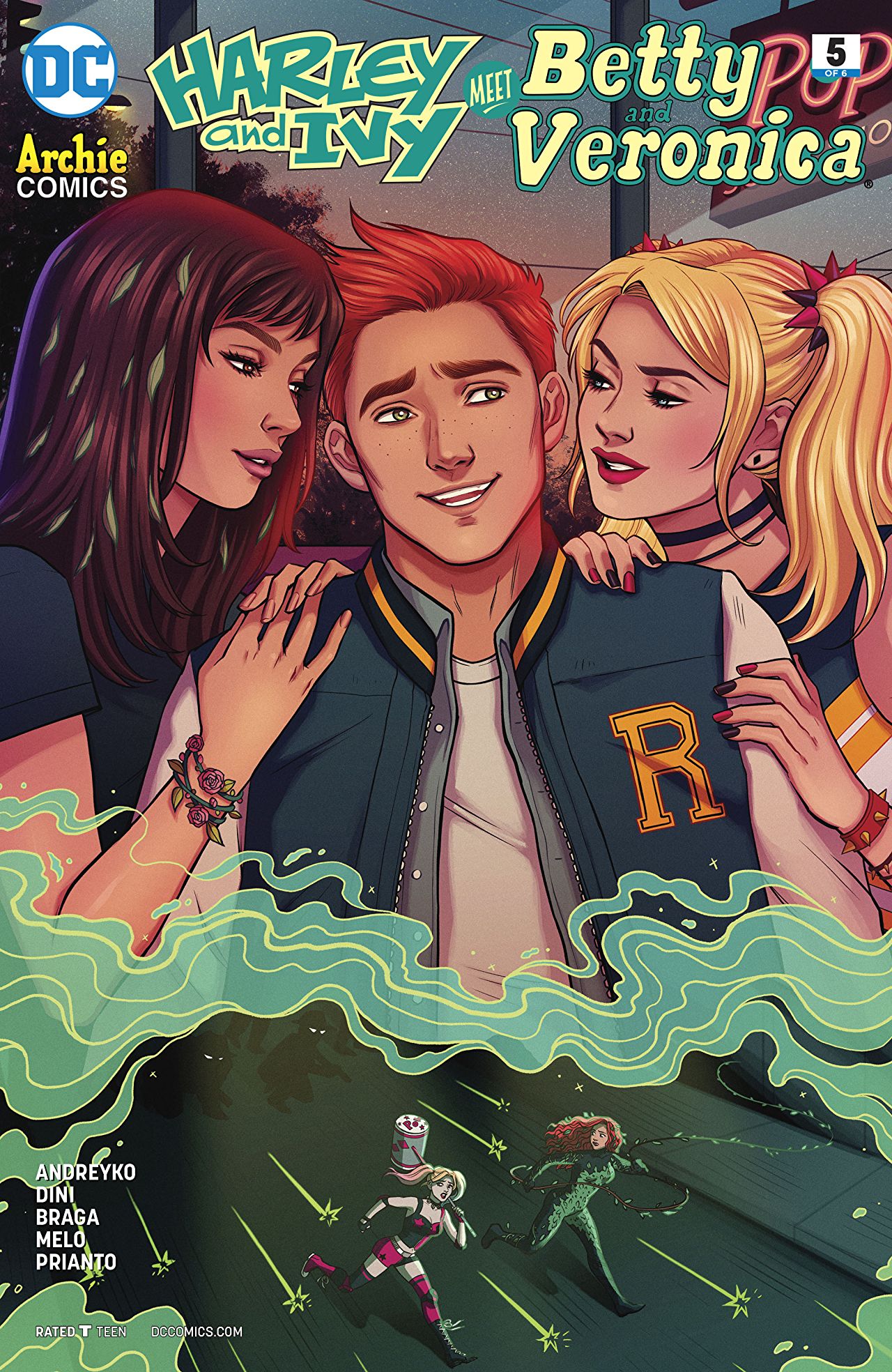 Overview: Harley and Ivy’s body-swap with Betty and Veronica finally ends but now the ladies have to deal with the fallout from the freaky event. How can they get out of the series of jams they have gotten themselves into?

Synopsis (spoilers ahead): Reggie snaps out of the trance that has made him think he was Joker. He is in Gotham and is looking for a ride back to Riverdale. A car comes to pick him up, but it contains Peach-Head Henry and some of Lampry’s goons.   They have heard that ‘Harley and Ivy’ are headed to Riverdale so take Reggie along as a guide.

Betty and Veronica, in the bodies of Harley and Ivy, show up at Sabrina Spellman’s house. They guessed that it was she who caused the body swap. Sabrina posits that the magic that she was working might have combined with Zatanna’s to create the body switch. Luckily, when the ladies physically come in contact with their ‘other’ the spell should reverse. Sabrina casts a spell to find the location of the real Harley and Ivy, a casino, and the three go.

At the Casino, Harley and Ivy, in Betty and Veronica’s teenaged bodies are getting kicked out of the casino. Their counterparts arrive and touch them. The switcheroo is reversed much to their and this reviewer’s relief. The four head to Pop’s Diner and Ivy explains that she is just trying to save Sweetwater Swamp from Veronica’s Father’s development project. Ivy recalls that Mr. Lodge had introduced her to his partner on the project – Lenny the Lampry. Harley and Ivy know that Lampry is going to cheat Lodge out of the money for the project. The quartet will team up to save both the swamp and Mr. Lodge’s fortune.

The four go to see Mr. Lodge and when he threatens to call the police on Harley and Ivy, Ivy hits him with a scent that makes him open to suggestion. She suggests he bring her the deed to the swamp. Betty and Veronica are aghast at her heavy-handed tactics. The two try to assault the super pair but it doesn’t go well. Peach Head Henry arrives to find Veronica upside down dangling by vines and Harley choking Betty. He frees Veronica and knocks her out using a peach pit gas.

They take all the characters, including Reggie and Mr. Lodge, to see Lenny. As they leave, Smithers awakens and calls his butler friend Alfred.

The baddies take their captives to the swamp: Ivy in a pipe, Harley tied to a pair of porta-potties, and Betty and Veronica tied to each other. Lenny’s plan is to set explosives around the swamp that will be set of at the groundbreaking ceremony thus killing the ladies. The gangsters leave and Reggie arrives. Before he can help, he trips on a vine and knocks himself out. The public arrives at the swamp ready for the groundbreaking. Until next time….

Analysis: Writers Paul Dini and Marc Andreyko are writing a story that is more complicated than necessary. There are a lot of pieces being moved around the board and it is interfering with what should be a jolly little romp. There is the body swap business, back and forth between Riverdale and Gotham, the Joker/Reggie confusion, as well as the mixup between Sabrina and Zatanna. There are allusions to people losing their memories after the body swap is undone, but it isn’t clear if that happened or not. All of this could be overlooked if there was a wild rumpus going on in the story, but there isn’t. All of this complexity is pretty much the whole lollipop, with no chocolate center.

Also, at the end, it isn’t clear where the ladies are so that they will get blown up during the groundbreaking ceremony. It appears as if B and V are on the other side of a pole or fence from the rest of the town. Also, at the end, Reggie appears to be back in Joker mode when he stupidly trips. What is happening?!?

The book is drawn by Laura Braga and Adriana Melo. Colors are by Arif Prianto and letters are by Deron Bennett. The book looks fine, most characters are consistently drawn, though Reggie goes back and forth looking more or less like Joker depending on the page. Peach-Head Henry looks like a peach. Lenny’s skin has a strange look to it like he has a skin condition which he probably does. Smithers doesn’t look well though, he should see a doctor. All in all, the art is solid and the colors perfectly serviceable though none of it is outstanding.

I was really looking forward to this book when it was announced and it is sadly a disappointment.

Final Thoughts: Harley and Ivy Meet Betty and Veronica #5 is a story that is fussily complicated without being compelling. I sadly cannot recommend it.