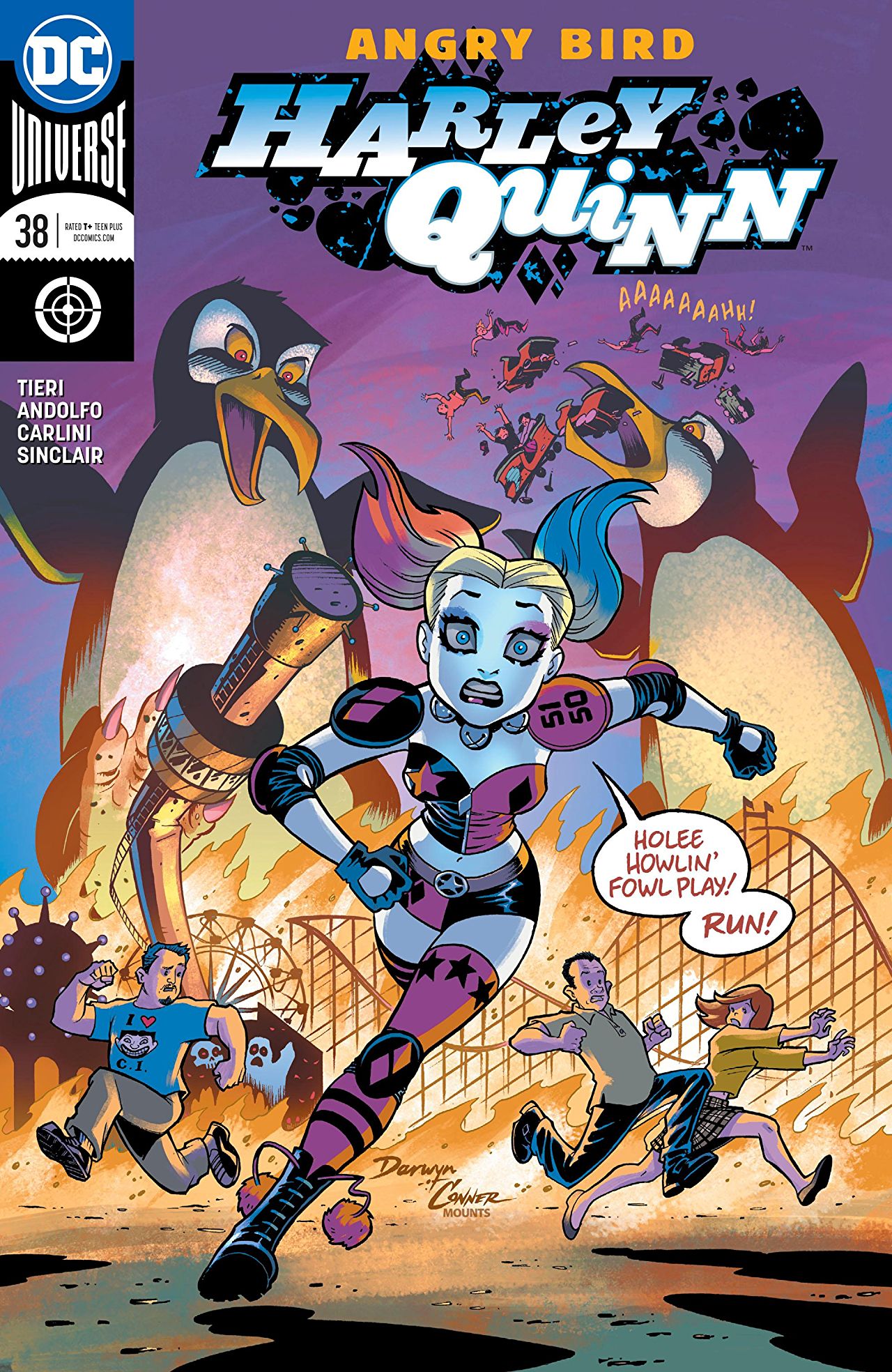 Overview: Batman’s Rogue’s Gallery invades New York City in the absence of Harley! And Killer Croc reclaims what was his.

Synopsis (spoilers ahead): Sy is going to take his first Polar Bear plunge of the season, dressed in some very revealing swimmers (which he claims are “European”) when he and the rest of the crew discover the ocean has turned to ice! What’s happening? Mr. Freeze has arrived! He duly combats the Gang of Harleys who find themselves outclassed, equipped with only bad puns as Mr. Freeze runs right over them. As residents and beach-goers run away, they run into the weapons of the one and only Condiment King! Egghead reveals that they are far from the only Batman rogues infiltrating NYC – Ratcatcher is in Grand Central Station causing chaos, King Tut is at the Met, Johnny Karaoke is on Broadway, Film Freak is at the Tribeca Film festival and Zebra Man is releasing the animals at the Bronx Zoo – all in all, some of Batman’s most obscure rogues are causing problems!

Meanwhile, atop the Empire State Building a group known as the Gorilla Gang, (they aren’t real gorilla’s, they just wear ape masks) is holding everybody up there hostage. Harley interrupts them, causing a commotion and breaking apart their plan, but when the Gorilla King gets the drop on her and is about to fling her from the building, Red Tool arrives and unbeknownst to Harley, saves her life.

Elsewhere, Killer Croc is busy digging up a section of the pier. Killer Moth foolishly challenges him to leave this area as he says he has laid a claim to that area. Killer Croc, looking monstrous, throws Killer Moth through a rotted door and warns him, “This belongs to Croc now. All of Coney belongs to Croc now.” Interestingly what we see revealed is an old poster which advertises the horrific Crocodile Boy.

Back at the Empire State Building, Harley is the toast of the town, as she has beaten back the Gotham gangs, and rang the bell on Wall Street! She avoids a call from the Harleys, which has to do with Coney Island being in chaos.

Analysis: First off, points to Frank Tieri for using the Condiment King! He’s always been one of my favorite minor Batman rogues and it’s a delight to see him used here. This is another excellent issue which slightly further Harley’s progression from “part of the gang;’ to a solo operator, but it also features delicious cameos from mostly minor league Batman rogues (with the exception of Mr. Freeze) and an emotionally tender scene with Killer Croc that comes out of almost nowhere. The Killer Croc scene intrigued me – we see a snapshot of what was obviously him at a young age, a carnival freak. He has a reason to specifically want to come to Coney Island, even though he has previously had good relations with Harley. To me, that’s good writing by Frank Tieri. I’m intrigued to see more of Killer Croc’s past and how this issue resolves.

The chaos in Coney Island with Mr. Freeze and Condiment King running amok is almost certainly a metaphor for the insanity Harley is running away from – the obligations to protect her friends, to become responsible for both their welfare and their losses have weighed heavily upon Harley. With Mason, she saw what losing somebody close can really mean. Now she is in the middle of New York City, she is the toast of the town but she’s avoiding those she cares about, probably because it hurts to care. It’s a neat storyline that hits the right places and you can tell as a reader the storm is upon us…

Turning to the art, there is a brash cartoony quality to the scenes with Mr. Freeze on the beach that scream- “action!” The coloring is beautiful and pops, especially in the scene with the Gang of Harleys fighting him. Condiment King and his condiments quite literally splash across the page and it feels like good old-fashioned fun. With each issue, I’m quite simply falling further under the spell of this new creative team on Harley Quinn.

Final thoughts: A very strong issue which highlights a lot of action amongst the rogues and alerts us to the fact that Harley, so busy in protecting greater New York City, is neglecting her home.