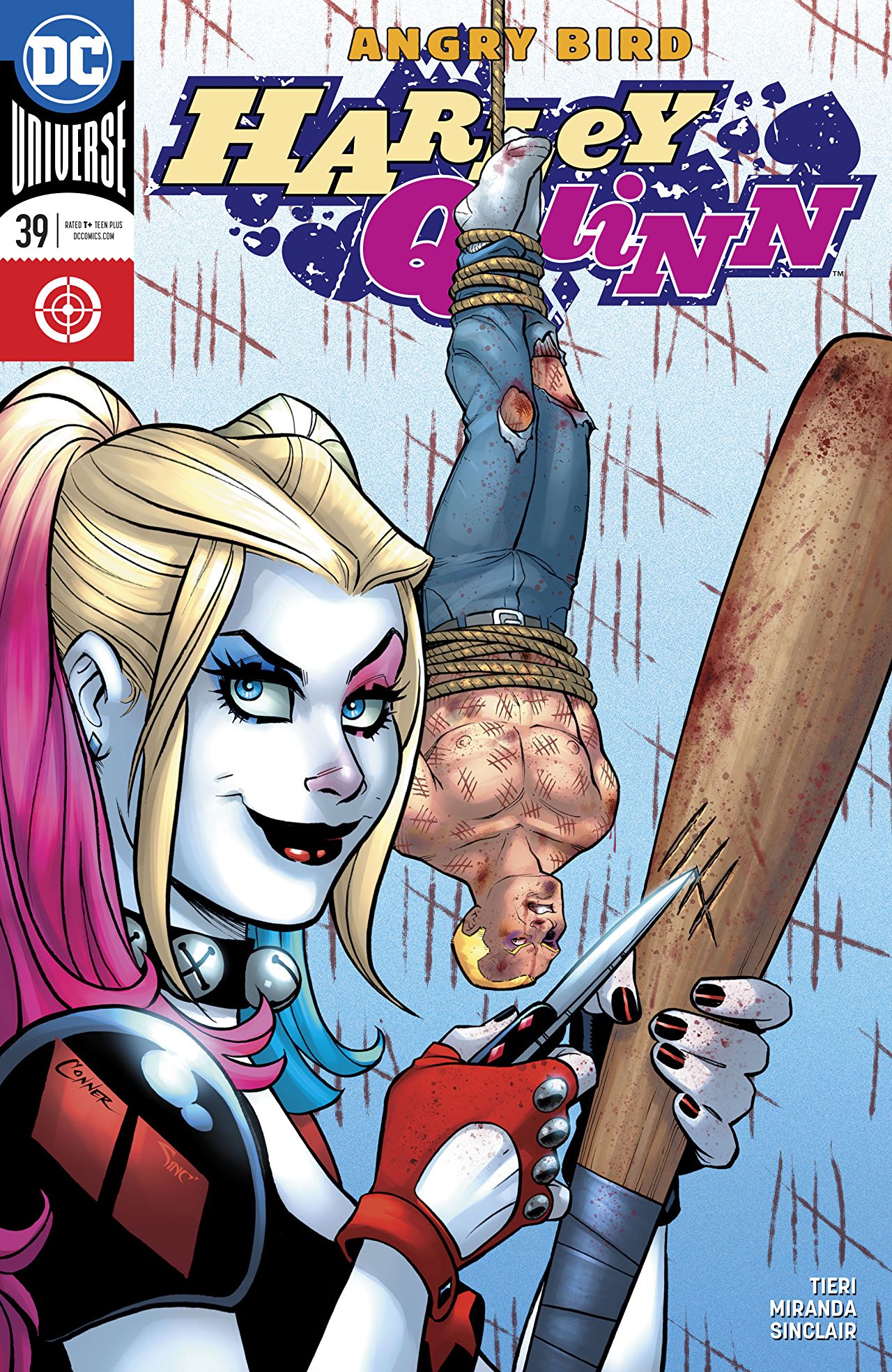 Synopsis (spoilers ahead): All seems peaceful at Coney Island Aquarium as two workers make small talk until suddenly their new Great White Shark acquisition turns out to be no less than King Shark himself! As terrifying as he is, King Shark is nothing compared to Killer Croc determined to seize Coney Island and everything in it for himself!

Penguin is aware of Croc’s ambitions, but for now, they fit his plans of chaos, while he is still banking on his huge mutated penguins – one of which has just eaten Tweedledum! While Penguin is eating at Condiment King’s establishment (and props again to Frank Tieri for bringing in Condiment King to this story) Harley is meanwhile exhausting herself in a series of week-long never-ending battles against a variety of foes. We see the likes of King Tut and Ratcatcher going against her as Harley battles through the week, exhausting herself, reducing her combat effectiveness.

Chief Spoonsdale is concerned for Harley’s welfare as she is spacing out while he talks, but the chaos in NYC is running rampant regardless, and Mr. Zsasz is held up in Yankee Stadium. Zsasz remains as crazy as ever, challenging Harley to combat, her and her baseball bat against Zsasz and his knives. The depleted Harley is clearly at second best during this fight, not fully aware of her surroundings, although still able to talk trash with the best of them. Harley is coming off second best against Zsasz until Red Tool intervenes at a crucial juncture, giving Harley the surprise opening she needs to kick Zsasz where it hurts and steal a last-second win. Exhausted and bleeding, she barely manages to criticise Red Tool for not leaving her alone, before she falls into his arms, unconscious.

Cutting back to Coney, Coach, the wheelchair bound member of the Gang of Harleys, has come to visit Frank Frank, Harley’s friend and sometime advisor. She is curious about why Harley, so protective of her friends usually, has effectively abandoned them to the madness of Croc and the other rogues destroying Coney Island. She has her hands on a doll that Frank Frank gave Harley, and she has found it is coated with a serum that leaves the affected party much more open to suggestion. Even as she says this Hugo Strange appears from behind and sedates her, while Frank Frank pulls off a mask Scooby Doo style to reveal he is in fact False-Face! DRAMA!

Analysis: This is the best issue so far in Frank Tieri’s strong Harley Quinn run. Tieri has cleverly weaved in some interesting and somewhat neglected members of Batman’s Rogues gallery into a clever and colorful tale that center on Harley and her almost compulsive need to fight for what she loves. In this case, it becomes the city of NYC itself, as Hugo Strange and False-Face’s bizarre gambit, has led her astray despite her best intentions. The deeper we go into this arc the more impressed I am.

The art  by Inaki Miranda has a  nice touch of savagery with a refined, sharp edge that highlights beautifully not just the stylings of some of Batman’s more unique villains but with the coloring and shading on Harley’s pale face we get a taste of her exhaustion and her compulsion – it’s a further visual buy in to an already excellent story arc.

The twist at the end with Hugo Strange is a worthy payoff and shows that Frank Tieri is really staking a claim on this book. He has the attention of the most ardent Harley fans so far and he’s proving to be a fine servant to this character who has exploded in popularity over the last decade or so. Harley Quinn continues to be one of the strongest titles out of the DC stable and I am excited to see what the future holds for both the character and this arc!

Final Thoughts: An extremely entertaining read and a strong continuation in this already strong run! Recommended!