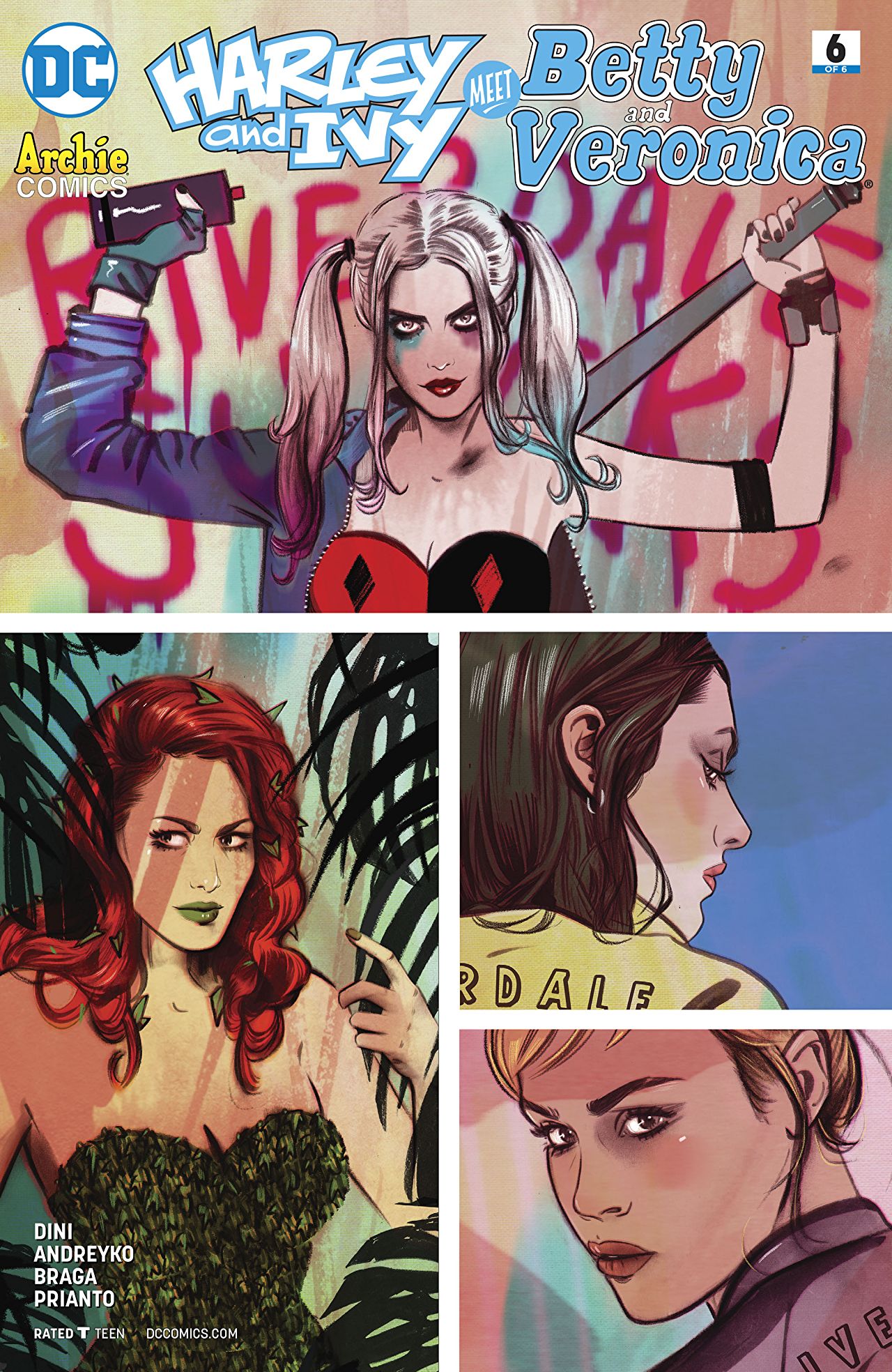 Overview: Harley and Ivy are trapped in an explosive situation along with Betty and Veronica. Can they escape, defeat Lenny the Lamprey, and save Sweetwater Swamp?

Synopsis (spoilers ahead): Harley, Ivy, Betty, and Veronica have been tied up at the Sweetwater Swamp just in time for the dedication ceremony of Mr. Lodge’s new college. All of Riverdale is at the swamp for the ceremony, but they are all surrounded by explosives that Lenny the Lamprey is waiting to set off.

With Harley’s help, Ivy is able to maneuver the pipe she is imprisoned in to fall into the swampy water where she emerges in full nature goddess mode. Ivy uses her Green Powers to free the rest of her team.

The four move to where the dedication ceremony is being held. The denizens of Riverdale are shocked at seeing the supervillains Harley and Ivy in their town. Lenny the Lamprey is shocked too and goes to set off the explosives. Pro tip: don’t skimp on the hardware that your evil plan depends on. Our four heros are able to find, excavate, and remove the explosives from near the crowd before Lenny can set off the dynamite.

Smithers shows up with his old British Intelligence butler buddy Alfred. They pick up Mr. Lodge and the Joker-bedecked Reggie and take them home.

Lenny is angry that his bombs didn’t create havoc and tries to run our heroes over in a car. Ivy traps the vehicle in vines.  Harley and Ivy leave the area to avoid the police which leaves Betty and Veronica to take the blame for all the commotion. Before Harley and Ivy get too far they are accosted by Peach Head Henry and his gang. Jughead shows up to distract one of the thugs with a delicious hamburger while Harley and Archie use fisticuffs to handle the others. Ivy finishes off Henry by turning him into a peach tree. Turns out Henry can grow a decent peach.

Mr. Lodge has decided to donate Sweetwater Swamp to a local conservation group. Ivy sends plant copies of herself and Harley to the police admitting to the problems at the swamp which gets Betty and Veronica off the hook. The two horticultural fakes are sent to Arkham.  The real Harley and Ivy are treated to a going away party at Pops. Harley has a hamburger eating contest with Jughead. Harley and Ivy leave Riverdale having made some friends and saved the Sweetwater Swamp from destruction. The end.

Analysis: Writers Paul Dini and Marc Andreyko finish the Harley and Ivy Meet Betty and Veronica on the strongest issue of the series. There isn’t any need to rehash the problems with this book, you can go back and read the previous reviews. The problems that we originally had are no longer evident. Betty and Veronica aren’t shown as friends here, but at least they aren’t portrayed as enemies. And with the body swap problem in the past we get to see a more straightforward story.

This issue has solid action. It is fantastic to see Ivy expose her true goddess self to the world. Much of the time she holds back her powers but I get a thrill when she finally says enough is enough and lets her freak flag fly. Seeing Alfred, Bruce Wayne’s butler, in this story is played for a good couple of laughs. The hamburger contest between Jughead and Harley is a great idea, but just serves to remind the reader of the great story this could have been. There are precious few moments of real connections between the characters. The final indignity for Peach Head Henry when he gets turned into a peach tree is creative and clever.

The book is drawn by Laura Braga. Colors are by Arif Prianto. The art looks good, the lines are a little heavy and many of the faces of the bad guys look very crude and ugly, which is likely on purpose. All in all the colors show nice balance and there aren’t any issues with the art getting in the way of the story. The panel showing Ivy emerging from the swamp looks cool, but could be more dramatic.

Final Thoughts: Harley and Ivy Meet Betty and Veronica #6 is a good finale to a story that is fussily complicated without being compelling. There are glimmers of a great story here, but it never gels into what it could have been.