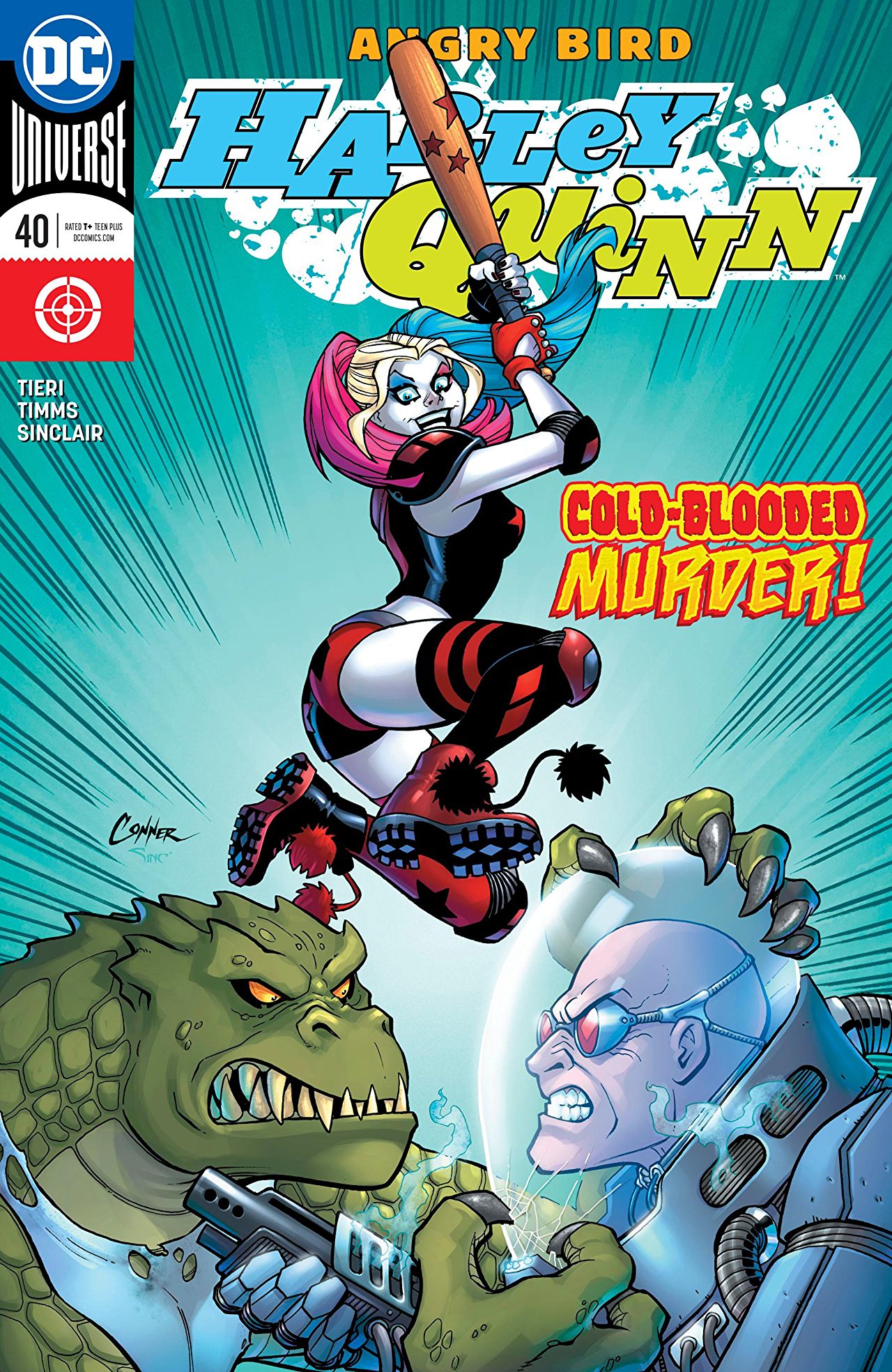 Synopsis (spoilers ahead): Fresh off the events of the last issue, Coach finds herself imprisoned with the REAL Frank Frank, who has been kidnapped and replaced by False Face. Frank tells his story of how he came to be imprisoned which basically involved a night at one of the Penguin’s sex clubs gone wrong. And while he has been imprisoned, Penguin had False Face and Hugo Strange leading Harley astray with a combination of bad advice and drugs.

As that is going down, Mr. Freeze is walking the shoreline and talking tough when who does he run into but Killer Croc, fresh and ready to challenge for domination of all of Coney Island!

Meanwhile, Hugo Strange is almost salivating since he thinks he is going to have Harley on his operating table. She is wheeled into to meet him, but our girl Harley has developed a serious resistance to various gases over the years. She wastes no time in beating up Hugo Strange and is about to administer an injection via a non-oral method when Ventriloquist and Red Tool both crash the party at the same time on different sides! It quickly becomes obvious the dueling sides are looking to make a deal. Harley is returned as the homecoming hero of Coney, while Ventriloquist seems to represent the interests of the Mob.

Eggy is meanwhile at the mercy of his captor, a seriously disturbed individual who seems to have a fetish for eggs. Just as things are getting seriously weird, the Gang of Harleys turn up and blow him away with a bazooka! This is the new Gang of Harleys they decry. Harley has gone all tough and crazy, and now so have they!

The now freed Harley comes in at the end of a long battle between Killer Croc and Mr. Freeze. She quickly smashes Mister Freeze in his helmet with her hammer and then has a long deep and meaningful chat with Croc, questioning why he’s so determined to make Coney burn. She realizes it’s due to Croc’s deep anger at how he was treated as a freak-show by the crowd at Coney Island; when he was a child, teased, mocked and treated like an exhibit instead of a person. After speaking to him, Harley offers Croc the hand of friendship again because hasn’t Coney burned enough already anyway? As the issue ends, we are left with the cliffhanger of whether Croc will accept Harley’s offer.

Analysis: The battle for Coney has heated up and gotten personal as Harley puzzles and bashes her way through the machinations of Hugo Strange and False Face. This won’t be a quick victory though, and it relies on a negotiated settlement with Ventriloquist, hardly the most trustworthy of allies. The would-be alliance with Croc, based on their long friendship, holds better hope of a more lasting happy ending for Harley and her gang of misfits. With Frank Frank meeting up with Coach and realizing the impact that False Face has had on Harley, pushing her further and further away from her friends, we as readers have now seen the ultimate limit of that separation and the cost to Harley, her friends, and her home.

Special mention must be made of the always slick art – the panel which showed Killer Croc coming up to Mr. Freeze, a ripped poster decoration in his hands, amongst the mist, was breathtaking. Harley’s quick turn from wounded and unconscious, to fighting fit and in command was the kind of transition that reminds us that having powers is not the real mark of a hero. In her own way, Harley is the equal of any hero, with all their powers and miraculous advantages – her fighting spirit and savage humor resonate very strongly in the hands of Frank Tieri. Finally, all those who have missed Harley from Coney and her gang can celebrate the return of the ruler, although her kingdom may be a troubled one. Overall, an excellent issue.

Final Thoughts: An exciting, action-packed issue of Harley Quinn which is starting to pay off this arc of Harley exiling herself from Coney and her friends. The chickens are coming home to roost!