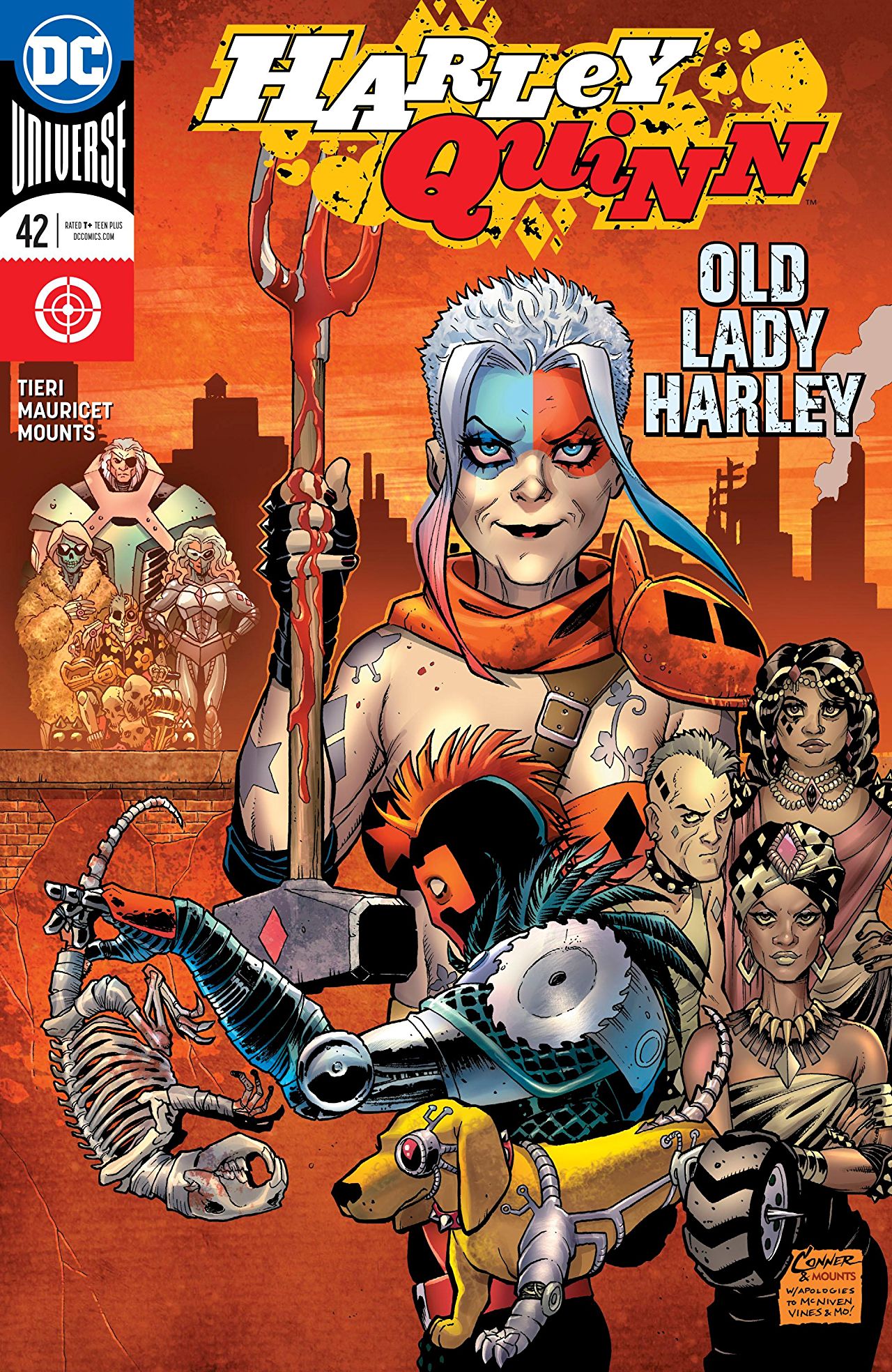 Overview: Thirty years into the future, Old Lady Harley is traveling the wasteland of New Jersey, strapped to the front of a death-mobile!

Synopsis (spoilers ahead): The action kicks off with Harley strapped to the front of a death mobile, driven by Red Tool, as they are pursued by a Goat Boy gang. Red Tool hits a special button to go soaring over a broken bridge and escape the pursuers as Harley curses him out. This lands them in more trouble until an aged Big Tony swoops down in his robot suit to reduce them! Harley fresh out of her restraints at the front of the car kicks Red Tool hard in the groin and he keels over. They quickly reach Brooklyn which has been decimated since Harley left years ago.

Sadly things have gone from bad to worse, and she’s told Coach has been infected by a malware virus spawned from Brainiacs, and the Gang of Harleys were reduced to fighting each other. Zena shows up with Cy in tow, both of them now almost fully cybernetic with Cy seemingly offline for good.

However when cloned mutant versions of the Penguin attack, Tony flies them all to New Coney Island! This is kind of a Vegas-themed reinvention of Coney Island, and Harley confronts the Gang of Harleys and bashes sense into them. The issue ends on a semi-hopeful note as she rides off into the sunset with Red Tool, who some reason she has decided not to kill.

Analysis: Taking the cue directly from a badass mashup of the George Miller movie Mad Max: Fury Road and of course the Mark Millar Old Man Logan storyline, this “Old Lady Harley” issue hits harder and with more verve than I expected. The art by Mauricet is slick and confident, setting the scene for Harley strapped to the car a la Max in Fury Road. I found myself drawn into the clean, bright visuals that bring out the flavor of a post-apocalyptic Jersey. If it’s a joke, it’s not a joke for children – there’s darkness in this comic, that mixes with the stage sense of fun, emphasis on the savagery.

The second part to this comic, which gets serious play, is the extrapolation of Harley’s supporting cast into this desolate future – this is played mostly for laughs, but again there’s a grim sarcasm to the story which works so well. It was interesting to see the likes of Zena and Sy, robotically hanging onto the last vestiges of life (rather more successfully in Zena’s case), now more machine than human. The treatment of Red Tool was interesting and a comment on a character that is a complete rip-off and parody while also showing surprising longevity for such a throwaway role. It was kind of cool to see him play as the foil here, Harley’s captor in some ways as he drove the death-mobile, again straight out of Fury Road, before the inevitable reversal.

When it came to the conclusion, with the Gang of Harley’s, now fighting amongst themselves for control of New York, tearing apart the very place Harley and her cohorts had so long protected, we get to the dark heart of this story. There’s nothing intrinsically heroic about them now, reduced to squabbling over the ruins of what is left. There’s a cartoony fun to the way Old Lady Harley swoops in and knocks sense back into them with her baseball bat. In a very real sense, this future has been lost and much like in Fury Road whatever is left is desolate and filled with chaos. The masses who cry out Harley’s name in her victory (over her former comrades) may all be in her mind, or they are just the fellow denizens in this nightmarish world. It’s a brilliant, fun issue in so many ways, unafraid of its own bleakness and barely happy ending. Frank Tieri is riding a wave of quality on this title.

Final Thoughts: A clever inversion of very different stories, this blend of the apocalypse with Harley and her supporting cast hits on all cylinders! An ambitious winner by Frank Tieri and Mauricet!