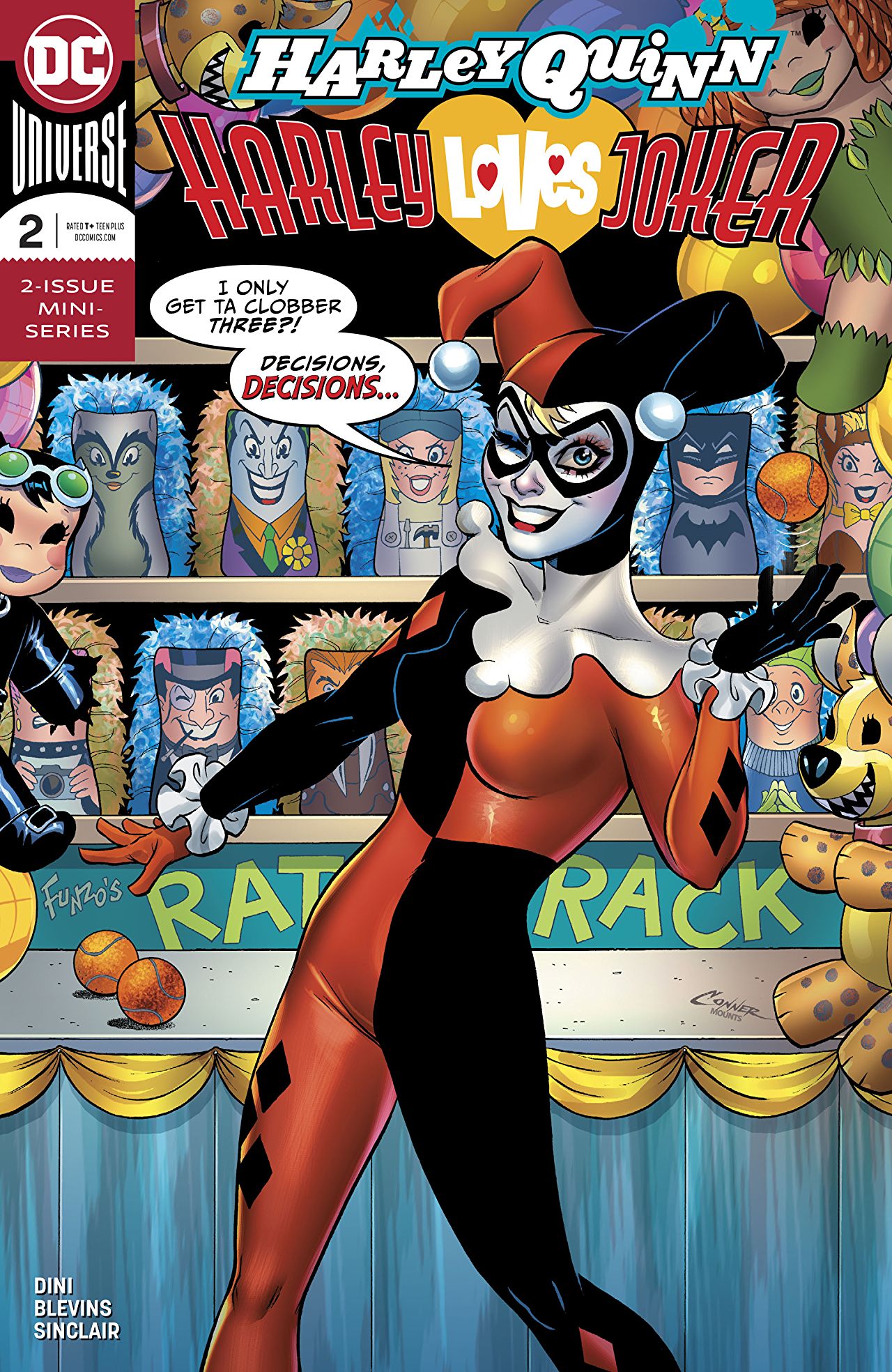 Overview: In the midst of a mental conversation with her therapist self, Harley confronts her own fears and cycle of need for the Joker, all the while trying to foil the Grison from supplanting her as the Joker’s main squeeze!

Synopsis (spoilers ahead): The setting for much of this issue takes place quite literally inside Harley’s head as it features (in the main story) a conversation between classic Harley and Therapist Harley, with some interjections from her mother. As the Grison is starting to take control of Joker’s affections and even the direction of his crime-doing, Harley is finding herself squeezed into quite literally the corner, neglected and out of the missions or fulfilling the role of a second-stringer. During these interludes, disaffected and out of touch with the Joker, she retreats inside her mind, dreaming of extended therapy sessions with herself which circle around her need for the Joker.

Meanwhile, there is a lively thread of action taking place outside of Harley’s headspace! The Joker, Griso, and Harley have robbed a yacht and are trying to evade capture by the police and Batman in his Bat-Sub! Some quick thinking from Harley makes Batman prioritize saving the inhabitants of the yacht over catching Joker and his gang for which Harley wins some brief praise from Joker, but quickly he is back to congratulating Grison when she foils Batman’s harpoon which almost reels them in!

Back at the HQ (which is still a ticking time bomb), Harley confronts Joker and then gets a major dressing down from him in front of Grison, sending Harley back into her mind for a conversation with her therapist self! Joker and the Grison strike out on their own, leaving Harley back at HQ – she calls up Alfred, warning him of an impending robbery at Wayne Tech, only to then discover a weird Joker talking doll in the middle of her conversation with her therapist self, which purports to be from Joker, advising Harley that Joker knows that Grison is setting him up for a fall, and he will be turning the tables on her and bringing Harley home a new fur coat!

There is an interlude between classic Harley and her future self, featuring the more modern outfit and a different attitude to the Joker, (where he is in the rearview mirror) but Harley insists Joker loves her, despite him apparently never saying it. Grison does indeed try and betray Joker, setting up an elaborate laser trap, but Harley rescues him, and they escape, while the Batman captures Grison and greets her in Portuguese! The Mad Hatter renovators blow up the HQ as Harley hasn’t paid the bill, shortly after the yuppie title-holders return, and Joker and Harley escape in his car – at first he has a long list of questions about all the coincidences that have sprung up around him, leaving them broke and homeless again, but after Harley blows a raspberry in his face in response to the questions, he starts laughing and the two of them drive cackling down the road. End scene!

Analysis: As an issue, this holds together far better than it’s middling predecessor, buoyed by a lively internal dialogue between Therapist Harley and classic Harley. The action around this crackles with action and humor, in an altogether more cohesive way than the first issue in this short mini. Unlike the first issue, I found myself fully engaged and not feeling as if the joke was stretched too thin. On top of the typical beats of the Therapist Harley engaging with classic Harley, there is the almost ghostly transition to Future Harley, the Harley of Palmiotti and Connor etc, who has left the Joker behind and embraced a life beyond him. Barely present in this issue, her ghostly self is the future itself – a shifting vision that could almost be a mirage. For me, this is probably the coolest and most interesting part of an already strong issue. Dini is clearly playing with this transitional Harley that is still very much in “caper mode,” seemingly only a year or two away from looking beyond the Joker’s horizon – it is quite fascinating.

Also quite telling is how Dini chooses to end the issue, with Joker and Harley careening down the road giggling and laughing at each other, at their situation, at the literal lack of answers – virtually an absurdist cartoon in action. Its a beautiful depiction of their shared insanity, and the only time in this story where the Joker seems truly capable of even slightly empathizing with Harley. He laughs when she won’t explain, he laughs at her refusal. There’s more than a tinge of mania to the relationship and yet, this is the sweetest part of the book, a strangely upbeat end. Of note also is the talking Joker in the conversation with Therapist Harley – he intrudes on her thoughts and it isn’t clear if it is a real talking jack-in-the-box or another figment of Harley’s imagination – is it her visualizing what she wants to hear? Dini doesn’t make the answer obvious, and yet it can easily be read as literally just a talking jack in the box, too.

All in all, this one is a keeper and a great vignette on the Joker-Harley relationship seen through the prism of Harley’s co-creator.

Final Thoughts: A much-improved finale in this two-parter Dini delivers in spades with a cool and interesting insight into the halcyon days of Harley and the Joker’s romance!