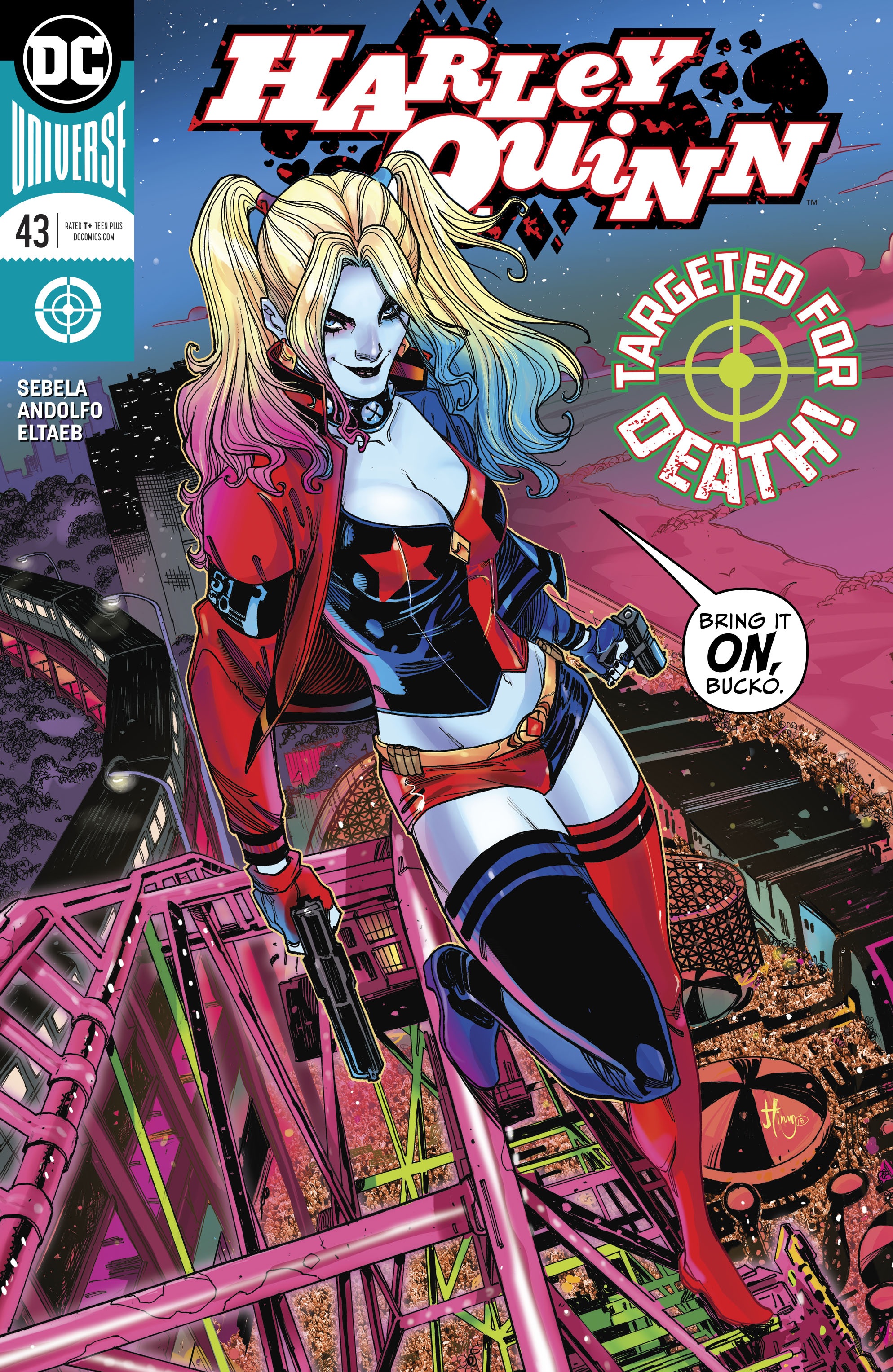 Overview: Harley is having a “dark turn” as her emotions spiral out of control, as she meets a fellow mentally troubled person which leads to the sinister machinations of Professor Pyg!

Synopsis (spoilers ahead): Picking up from the events of the last arc from Frank Tieri’s brief but excellent run, Harley remains separate from the rest of her crew and seemingly down on her mood and luck. As she travels the city, beset by a down mood, Harley is on the trail of a group who have robbed her favorite gourmet deli, wanting to take punitive action well beyond what the store owners want! In her journey’s she comes across a damaged person, who is revealed to be a disciple/victim of Professor Pyg, the evil mastermind behind the body and mind-altering surgeries that transform his victims into puppet-like Dollotrons! After first chasing him, then learning his secret, Harley and her new friend go down into the sewers, the floor gives way, and Harley and her friend wind up in the hands of disciples of the Reaper! There’s going to be more twists and turns in this tale!

Analysis: This is an interesting change of pace for the Harley Quinn title which under the new creative team of Christopher Sebela and Mirka Adolfo. It eschews much of the wackier tone of the Connor-Palmiotti run (carried on by Frank Tieri) for a more melancholic, troubled Harley for whom the mental issues which plague her, are phasing through a downturn, away from the more manic side of her personality which previously has been her major emotional key for what feels like years. It’s an intriguing take after so long in one major emotional key – I’m sure this has been explored before, but there was a different feel to this, as it did feel like this was one of Harley’s “down” or “blues”, the other side of her manic bi-polar intensity. I found it somewhat novel and daring, a definite change of pace which I am interested to see how the Harley fanbase responds to.

With that said, this is a Harley comic, with the usual cartoonish style art and overall emotional palette, and Sebela shows he does have a handle on this character even as he pushes her into slightly different directions. There’s still the talking beaver and she’s still delightfully nuts, filled with empathy. It’s quite likely that there will be an “in story” description for Harley being at less than 150% manic intensity but the impact is still there, and I’m sure for regular Harley readers like myself this change is quite noticeable.

The introduction of the character who is revealed to be a victim of Professor Pyg is also an interesting addition – such a damaged personality and exterior is millions away from the manic good vibrations of Harley’s previous Gang of Harley’s. There’s a consequence to the evil of Pyg – he always was one of Grant Morrison’s darkest and sickest DC creations for the Batman Universe. The insanity of the victim is not cheerful or full of quick wit – it’s hurt.

Compensating for the tonal shifts in mood, the artwork stays quite cartoony and full of pop, ensuring this change in the creative team doesn’t lead to too jarring an experience for long-time readers. The Pyg scenes have a darker, more brooding tone but the scenes as Harley walks around the city earlier in the comic still have that bouncy, manic bubblegum feel of most Harley comics. In a lot of ways, this is a compromise issue and I would expect the tone of this book to either settle back into a more familiar groove or plunge more headlong into the darker emotional beats hinted at here.

Final Thoughts: A darker, more somber take on the Harley mythos, which pushes this title into exciting and slightly confronting regions. Overall this is a bold tun for the Harley Quinn title – watch this space to see how it develops!