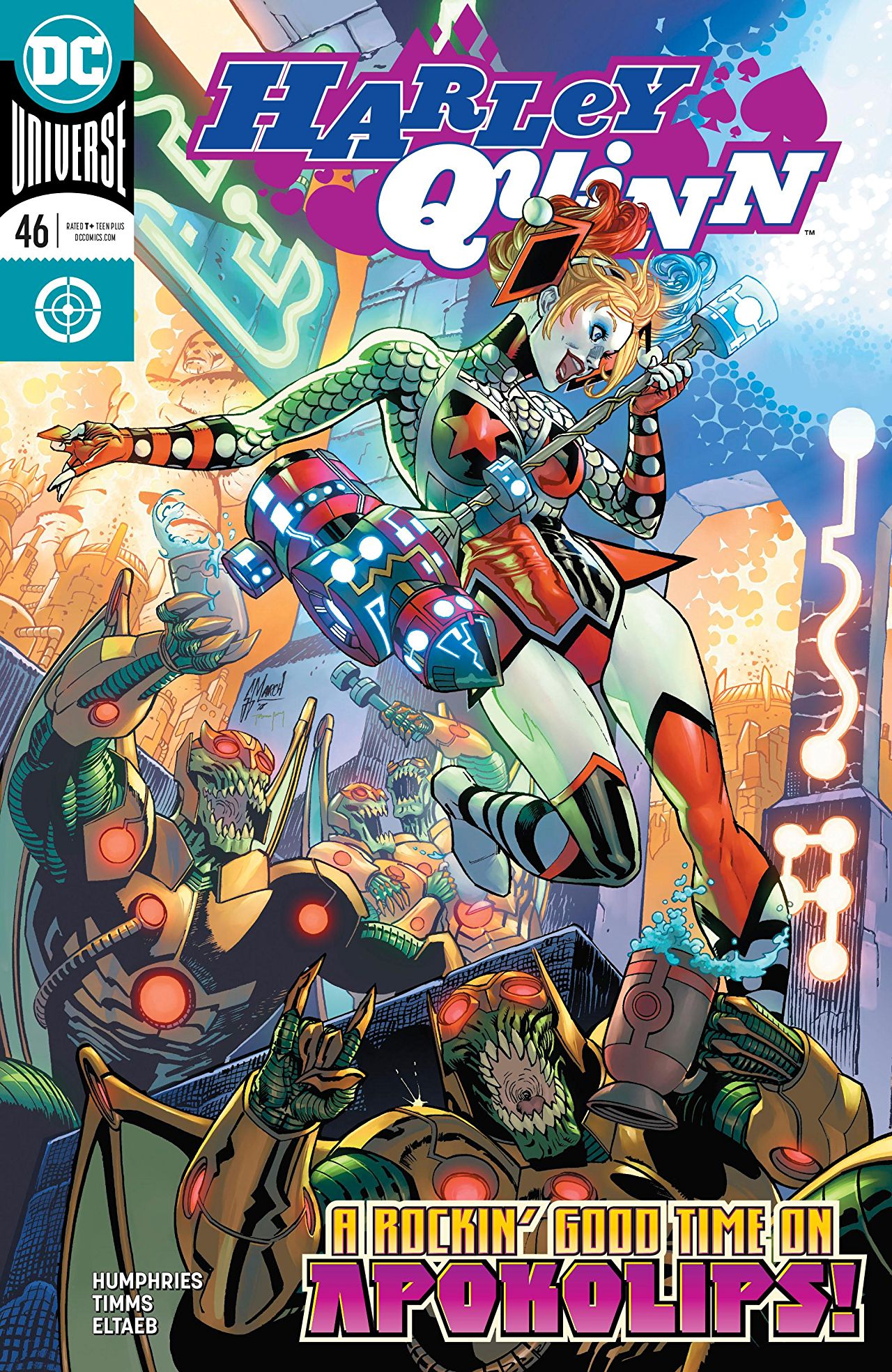 Overview: Harley starts to buckle against the rules of Granny Goddess, as the once infinite offerings of Apokolips start to lose their appeal.

Synopsis (spoilers ahead): Picking up from last issue, Harley is engaged in a slugging match against Petite Tina (who isn’t so petite) – after some initial blows are landed, the two engaged in a dialogue after Tina sees Harley cares about the child who is almost injured in the fight, a mere Lowlie, as Tina refers to her. Although Petite Tina offers her hand in alliance, Harley, in love with her powerful hammer, sucker-hits Tina with the hammer, knocking her out!

Harley acquires the item Granny Goddess sent her to get, which is needed for the activation of vast construction called the Subjukator, which Granny has built for her own nefarious purposes! Even as Granny regales Harley with tales of its own destructive cosmic power, Harley is starting to lose interest and patience in the whole concept – when she is told DARKSEID IS. She responds, is what? Granny loses her patience and Harley evacs back to the Furies locker room. Once there, Harley starts to realize how alone she is in this strange new world, and how cutting the comments section is. Harley being Harley, she quickly challenges them to a fight which she seems to win.

But all Harley really wants is a hamburger. Only they don’t seem to serve those on Apokolips, and she has to settle for the closest thing, which isn’t that close at all. As ennui wells up inside Harley, and she misses her home, the Granny Box inside her hammer speaks up promising all kinds of magical things – but it can’t set up a call to Harley’s mom, which is all she really wants.

Back on Earth, Coach is manning the fort and trying to keep the bill collectors at bay. She misses Harley and wishes her well, but there’s a knock on the door and they attack Coach.

Harley meanwhile is getting in quarrels with another Fury and gets her nose bloodied, as she is meant to be loading up people in a cage to be transported to the Subjukator. Harley, being Harley, has kind of not been super following the details of this little transaction, and when she realizes what is actually at stake, i.e. their lives, it’s kind of a bummer. As she enjoys her pseudo-not quite-hamburger, Granny Goddess calls her up, ANGRY. It turns that Harley transported all her prisoners to a beach on Earth, as those Lowlies could use a vacation after all they’ve been through.
Suffice to say Granny Goddess isn’t moved to happiness, and Harley swiftly finds herself stripped of both her hammer and her powers. After a speculative punch to Granny’s nose doesn’t land any decent results, Granny chains Harley up alongside Petite Tina, in a machine which is going to not just strip them of free will but obliterate their whole personality!

Analysis: This issue is a pleasure to read and makes me realize just how much I like my Harley written this way. Humphries never loses his snappy, self-aware style for the entirety of the whole book, and the end result is an elegant humorous book. The saga of Harley in Apokolips is inherently farcical, but none of Harley’s essential humanity is lost by giving her a magic hammer. She still misses her home, she misses her Mom, and she fears the people she left behind will have forgotten her. In a way, even with her magic hammer, Harley has never been more human, at least not for ages.

Unlike so much of her recent arcs, on Apokolips, Harley doesn’t have friends and pals close at hand – she doesn’t really have responsibilities, other than the ones Granny gives, which she barely listens to or cares about, so entranced by her fancy hitting hammer. The more urgent vows and responsibilities she felt for the Gang of Harleys and for those she lost, don’t exist on Apokolips. But freedom can become empty when it just means you ran away. The hamburger she wants so badly will never be on Apokolips for her, it doesn’t exist there. It belongs to another world where the cartoon is a tad more realistic and she can really lose and win. In a way that’s the beauty of this cartoonish, fun arc which is a tribute to Kirby’s wonderful Fourth World. Harley thinks it’s all really cool but she doesn’t buy into it, her reign as Fury is just an act, and even Granny seems to play along just a little.

The art in this issue is gorgeous capturing Harley as a pseudo-Goddess then back to her bikini-bod. There is not a panel wasted or out of place; along with the brilliant colorization we are injected into this wonderful Fourth World of so much possibility and so much danger. Harley lightly skips across it all, almost unaware of how dangerous it could be if she even took it the slightest bit seriously.

Final Thoughts: Another fine issue by this new Harley team, crackling with energy and sarcastic humor. Humphries and Timms are firing on all cylinders!