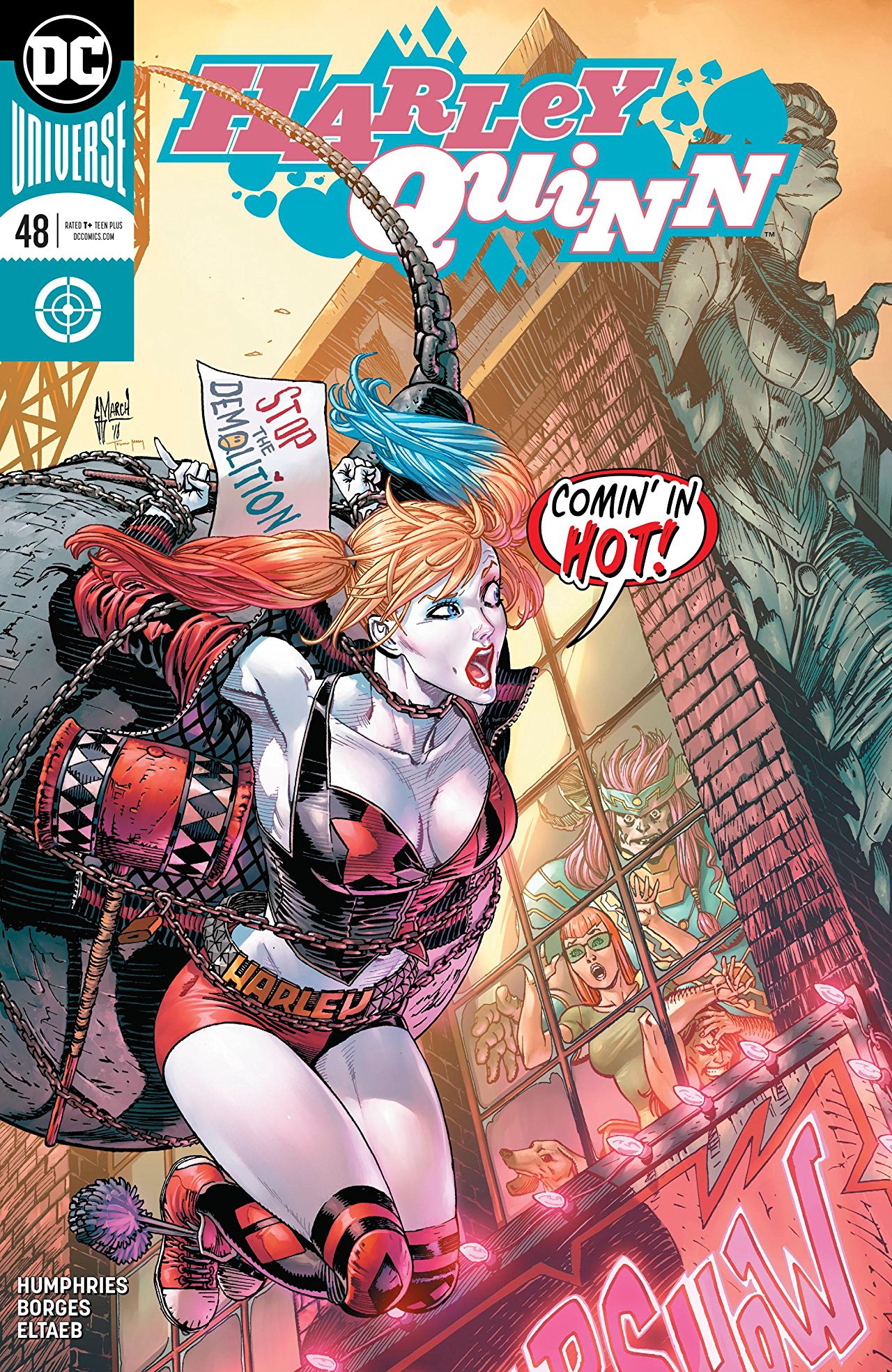 Overview: As Harley heads back to the Big Apple, she faces her home being seized by developers. As she desperately takes jobs to pay her mortgage bill, one of them includes trying to kill the un-killable Lord Death Man!

Synopsis (spoilers ahead): Harley is back from Apokolips and she’s facing a developer who wants seize her apartment building as she hasn’t paid the mortgage! Investigating the contract Harley see’s she has two days left to pay the bill! Racked with the sudden guilt of potentially turfing out Coach and all her “furry babies” out of house and home, Harley has to take on any jobs she can possibly do! After a quick distracting break where she realizes they have comics in the house, Harley attends a whole series of jobs, from working a diner to being a clown and a make-up artist, but after fines and compensation for damaged property, she’s only ahead seven dollars.

Harley then stumbles across an ad to kill the un-killable man, Lord Death Man, who is just an all-around bad guy, wanted for so many murders, with a bounty of one million doubloons! Straight away Harley takes the case, against the advice of her rotting beaver, (who says “I liked you so better in space!”) and sends poor ol’ Tina down the street to buy pet food, which given her immense size and monstrous appearance, doesn’t end well!

Cut to Harley in black stealth gear, chatting to her Mom, rationalizing the transition to bounty hunter-slash-executioner. After finding an inventive way to penetrate Lord Death Man’s lair, with a rubber mask, some bowling balls, a pizza, and a naked photo of Lord Death Man’s father, Harley kills the henchmen, and then seeking to claim her prize for the prone Lord Death Man (who seemed to have a heart attack when he saw his naked father!) she rips his heart out and puts it in a blender! But surprise, surprise, even as Harley seems ready to claim her money, Lord Death Man is up and about, drinking down the blended heart, and completely un-killable!

Analysis: This is an interesting issue of Harley Quinn. Sam Humphries is coming into his own style with Harley a manic presence across the action, and the farce is definitely present in this script and overriding else in the scenery here. It’s fun, it’s crazy, and you either go with the flow or it loses you. Alisson Borges on art deserves points for ambition and execution. There’s a slice of Simon Bisley to the artistic style, that weird mixture of cartoon and humor which fits well with the manic script. In a way, I was pleased just as an active reader to see this kind of art on display in Harley. There’s a slight separation from reality, which fits with the conflict with the crazy, un-killable Lord Death Man. It’s a joy to see some of the faces drawn on Harley, distinct for cartoony extreme emotions, and it shows a freedom given to Alisson Borges which is good to see. This title deserves some freedom.

Another fascinating appearance is the fake DC check-list column when Harley finds the comics in her apartment. It’s a beautiful slice of twisted nostalgia to see the almost 50’s style DC newsboy pop up, advertising Batman #54, (featuring “Jay Jay from college”!) Action Comics 2000, (“You liked Action Comics #1000, get ready to like this as much!”) and other comics and events which haven’t happened yet – I dug the way Humphries veers into this weird quasi-reality, which looks so similar to what would have been an in-house ad, skewed with the offbeat humour of a Harley comic.

Final Thoughts: Overall this is a fun, almost experimental adventure for Harley. She’s kicking ass and taking names, and the conflict with Lord Death Man is a regular hoot! This remains a series to WATCH!