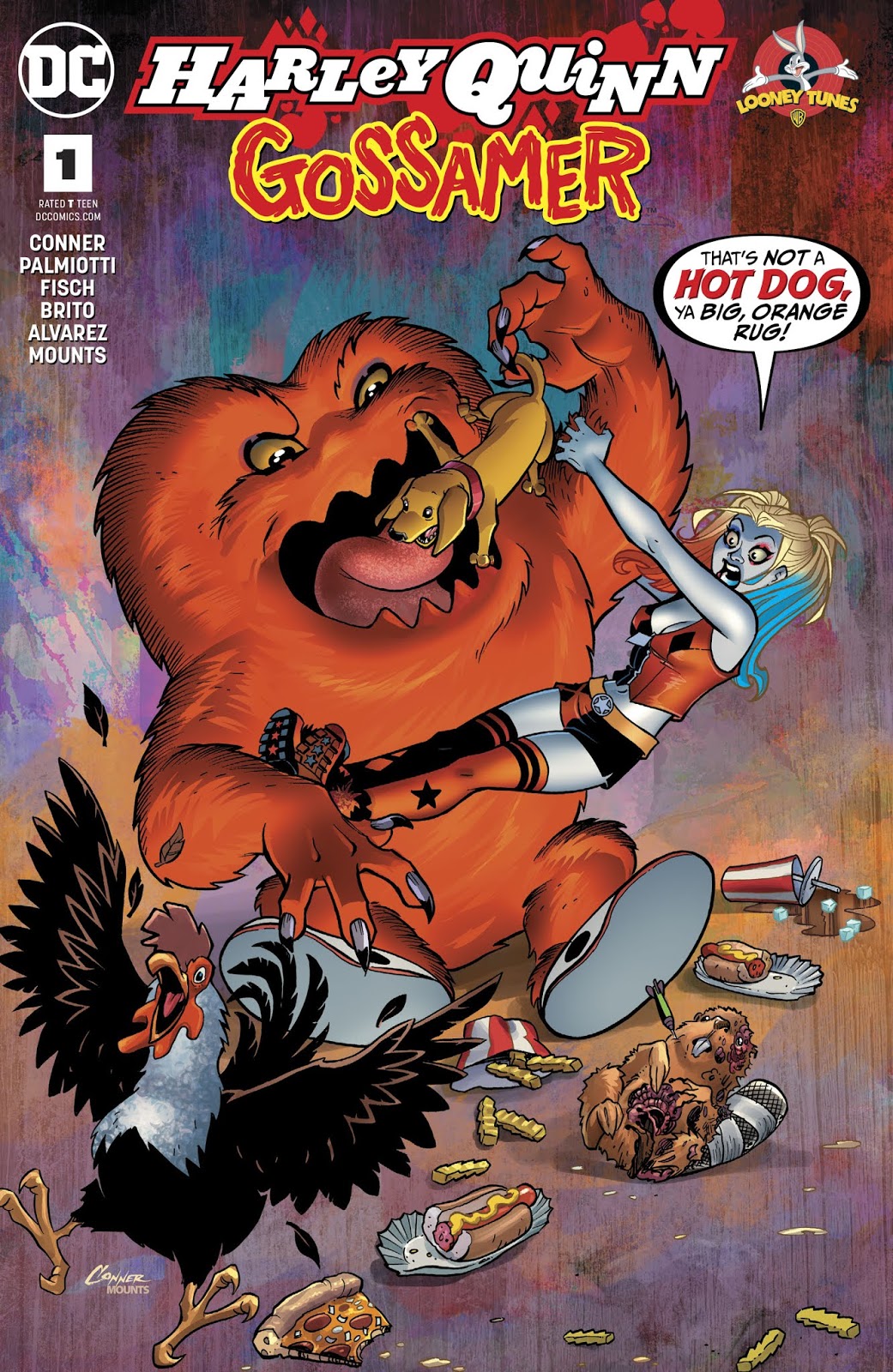 Overview: In this Looney Tunes mash-up Harley Quinn meets Gossamer, from the Looney Tunes universe of characters, as he washes up on Coney Island after a hurricane! Hijinks most definitely ensue!

Synopsis (spoilers ahead): Harley and Ivy are having a relaxing day at the beach, as a hurricane starts to blow in. Ivy has to return to Gotham City to check her plants and ignores the approaches of a needy Harley who wants company. Regardless, Harley is happy enough to have a pasta dinner with Big Tony and promptly sleeps through the storm in a “pasta coma”. Once she goes outside post-hurricane, she finds a big ACME crate, which she imagines might be wine and candy, but one she prizes the crate open, it’s a HUGE red furry something! This something is, in fact, Gossamer, a Looney Tunes character which made some appearances over the years and resonates vaguely in the cultural memory.  Gossamer is lost and far from home, and Harley decides to befriend him, taking him out to eat hot dogs, where Gossamer shows he can even out-eat Harley! All is going well until he tries to eat Nathan, Harley’s dog! But Gossamer doesn’t mean anything bad, he’s just greedy!

Harley gives him a bath, making a few semi-lude jokes which are a bit of fun, and she does his hair in a cute fashion while also giving him a Harley “hair-cut”! Suddenly a gigantic robot crashes into her apartment! After a fight, Harley seems to conquer the robot and manages to stop it from taking Gossamer away. Seeing the Joker’s paint job on the robot, Harley deduces that Joker is behind it all! Taking a train to Gotham, Harley visits Ivy (after a litany of other members of Batman’s rogues’ gallery in her effort to find the Joker) and tracks Joker (and Batman) down to a warehouse, where Joker has Batman strung up over a vat of acid! As Harley and Joker squabble and fight, Gossamer frees Batman, until suddenly the robot reappears and takes Harley and Gossamer away, after tossing Joker and Batman away!

The robot rockets into the sky and takes Gossamer and Harley back to what is his home, and a green scientist is revealed to be Gossamer’s creator, who created him from part animal, part vegetable, part mineral, with part of his brain from the scientist’s loyal sheepdog, and the other part from his deceased wife! Harley and Gossamer bid each other a fond farewell, and Harley is dropped home by a mysterious chauffeur, who is revealed to be none other than Bugs Bunny himself! That’s all, folks!

Analysis: This issue marks the return of the premier Harley Quinn team since at least The New 52, Amanda Conner and Jimmy Palmiotti. As expected. this is a wacky fun adventure which throws Harley’s crazy Coney-based milieu up against the somewhat mysterious character of Gossamer, and the interaction definitely plays to the creative team’s strengths.

There’s some subtle adult/teenage humor here at times, which works well in the context of the issue. One of the funniest lines is where Ivy reminds Harley of their upcoming spa weekend, and Harley breaks the fourth wall and addresses the reader, saying “sorry folks! That is definitely Black Label material!”, in a clever nod to the upcoming DC publishing line with connotations of more adult fare. It’s silly, fun quips like that which keep the Harley books entertaining, a light touch with a wink to the reader. The counter-programming appeal of this approach can’t be underestimated in the era of “back to basics” dark and tormented DC heroes, and especially it shines a different light and style of book to the Bat-Family books. There’s nothing wrong at all with dark vibe of the Gotham universe, but Harley’s flavor of crazy gives it a sweet tang. The inclusion of Gossamer, a Looney Tunes character I was not at all familiar with, is actually a lot of fun. Due to him not speaking at all, he really is little more than a shaggy dog with an appetite for hot dogs as far as the story goes, but there’s some charm in Harley’s interactions with him, and it plays well with her natural affection for animals. Of course, there’s both tears and a smile at the end, as Harley reunites Gossamer with his scientist creator. While this comic will never be held up as an example of great depth in comic storytelling, it is an extremely fun and kind-hearted adventure which continues to add to the Harley franchise.

There’s also a neat end retro short at the end with Harley and Gossamer which again highlights the one comedic chops on this book.  All in all, if you love or even like Harley Quinn, and especially if you were invested in the Conner-Palmiotti run, you owe it yourself to grab this fun DC/Looney Tunes mashup adventure!

Final Thoughts: A very cool and fun issue which blends in nicely to the current Harley run while also having a neat appearance from a fun, obscure Looney Tunes character! It’s a keeper!