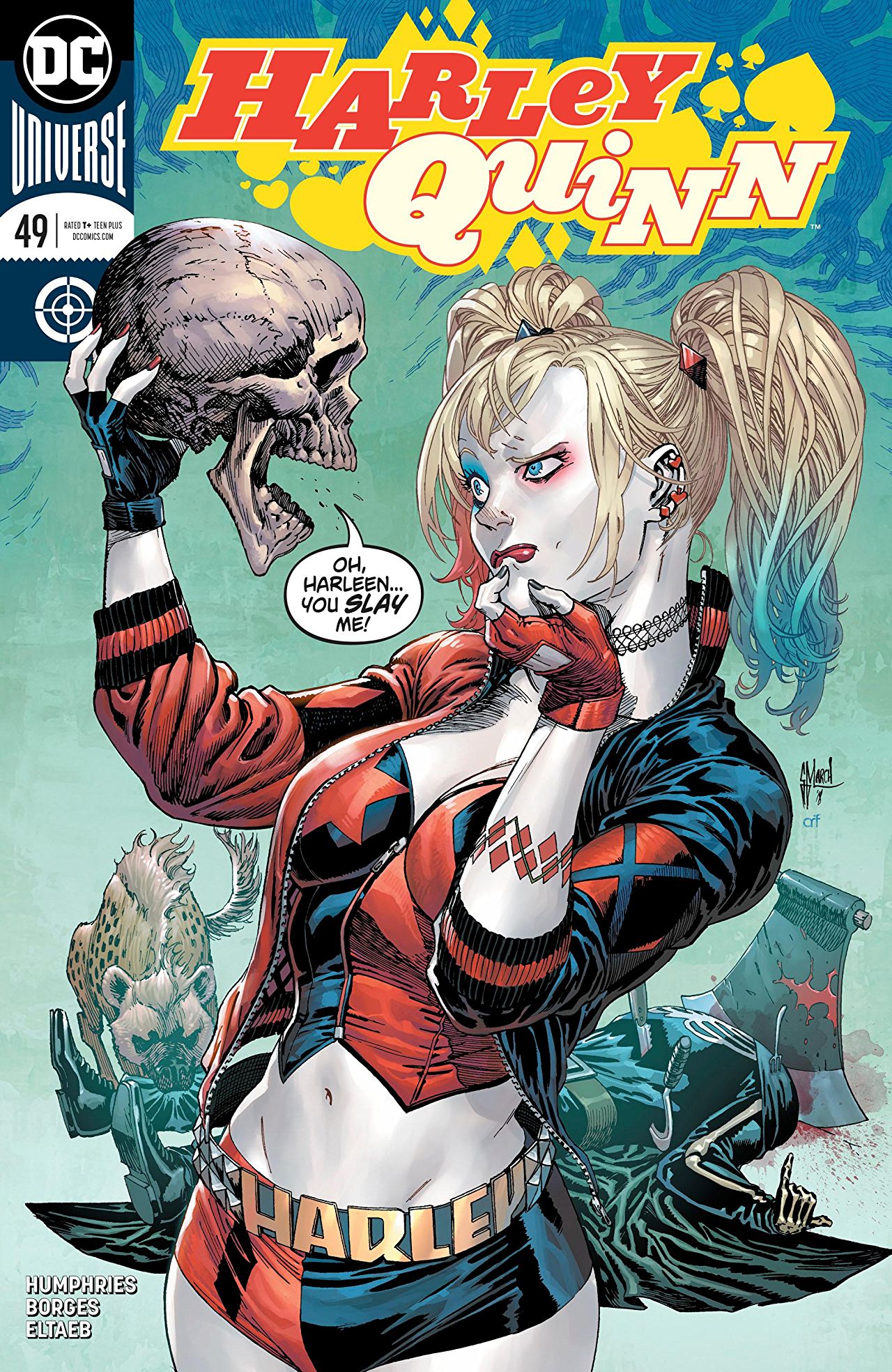 Synopsis (spoilers ahead): The issue opens with Harley bleeding on the ground with Lord Death Man standing over her.  Harley responds with a vicious strike which knocks Lord Death Man’s head off his shoulders.  Before Harley can separate, both the head and body disappear.  On the city streets, Tina of Apokolips is celebrated as a hero after she saves a child from a burning bus.  Harley has a hot dog, calls her mom, and is told by creepy land developer Mr. Lennick that she has two hours before the Freakshow legally belongs to him and can be bulldozed. So, Harley goes off once again to kill Lord Death Man.

In a Manhattan penthouse, Lord Death Man recovers as his men ask him why he is willingly walking into Harley’s traps and Lord Death Man yells for Harley to try again.  Harley lures Lord Death Man to an inflatable bouncy castle which leads to a series of death traps (Bears, lions, sharks, rocket-propelled grenades, etc) which ends with Lord Death Man being blown up and dropped into a live volcano.  Harley is paid for killing Lord Death Man, who is revealed to have survived and to be the mystery client who hired Harley to kill him, professing his love for Harley Quinn to a shadowy thug.

Harley’s building is saved and Harley settles in to read her Harley Quinn comic book.  In the epilogue, a mystery woman runs from a terrible date when she senses trouble, discovering that DC Continuity has been compromised.  The woman shouts that Harley Quinn must be stopped and transforms into “Jonni DC, Continuity Cop”.

Analysis: Harley Quinn is a character that is hard to pin down.  In some books, she’s a conflicted figure with a heart of gold who has survived horrific abuse and come out the other end a stronger person.   In other books, she’s an amoral and unstable killer.  And sometimes she’s a cross between Bugs Bunny, Deadpool, and a disgruntled Hot Topic employee.  That’s the Harley we tend to get in her ongoing title, and Harley Quinn #49 is no exception.   I don’t think there’s anything wrong with that take on the character, but it is also a Harley Quinn that I don’t find particularly interesting.

Don’t get me wrong, this is a fun read. There is a cartoonish energy to this issue that I can’t help appreciate, but at the end of the day, everything about this book is very much on the surface.  But as much as I enjoy the Wile E. Coyote hijinks, it’s just another example of a book that is just a bunch of stuff that happens.  One week, Harley’s in Apokolips.  Before that, she ran for mayor.  And now she’s spiraling further into parody by destroying “DC Continuity”, which, will turn out just fine.  None of it means anything.  Its just a bunch of stuff that happens.  Harley never learns anything, and there are no real stakes in this title.  This book is like candy floss.  It is colorful and fun, but it’s not a meal.  So while I enjoy the zany adventures, it’s really hard to muster any real interest in what’s presented here.

That being said, Lord Death Man is an interesting foil for Harley and I like the seeds that have been planted here for further interactions between the two of them.  To keep the Looney Toons analogy going, it would be fun to see Lord Death Man turn into Harley’s lovesick Pepi Le Pew.

Allison Borges does a great job with the art.  His style is a good match for cartoon lunatic tone that the book seems to be going for, particularly in the Lord Death Man deathtrap sequence.

Final Thoughts: I’m not advocating for a “Darkness, No Parents” take on Harley Quinn… that would get old fast. If this was some sort of limited series, “Harley vs the DC Universe”, I would say buckle in and enjoy the ride.  But in the “Harley Quinn” ongoing series, I think that the character deserves more than what’s presented here.