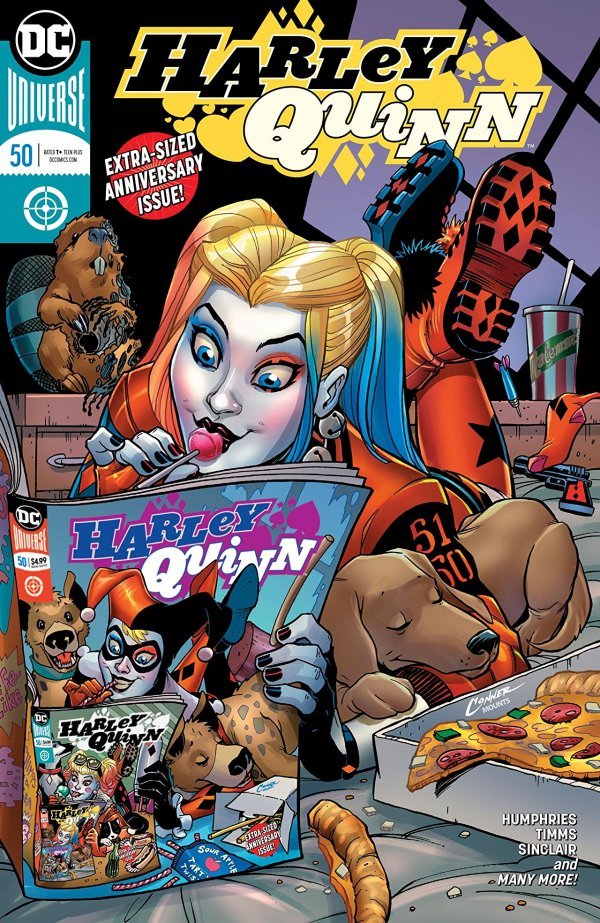 Overview: Harley mistakenly destroys DC Continuity and travels across alternate Multiverses to put things right. Can Harley repair the damage she did and get her mother back?

Synopsis (spoilers ahead): Harley and her mother are having a lovely day on the Coney Island boardwalk, soaking up the sun and eating greasy food. The two have a lovely relationship and enjoy each other’s company. Over lunch, Harley shows her mom a comic book someone named M. Clatterbuck had written about her. The cover bears a striking resemblance to the actual Amanda Connor/Paul Mounts cover of the actual issue itself. They flip through the comic and Harley realizes that it depicts her experience on Apokolips where she was Hammer Harleen. This is odd because her trip to Apokolips had happened just three days prior.

Suddenly everything begins to go woozy. Colors become strange and the fabric of reality itself begins to unravel. Harley’s mom disappears in a cloud of flower petals Thanos-style (yeah, I know, wrong publisher).

A woman races up to Harley and tells her to put down the comic book, or as she calls it a “weapon of continuity destruction”. By reading the book Harley has destroyed DC continuity. Alternate versions of familiar characters emerge from the void and spill out into the new reality.

Harley wants to find her mother, who has been retconned out of existence and is joined by a woman with the body of the DC Logo whose name is Jonni DC – Continuity Cop. They search for M. Clatterbuck to find out how to fix the continuity.

Continuity shock waves cause them to  travel through layers of incorrect character configurations where they emerge in a number of scenarios. They find a savage young Bruce Wayne who grows up into a gun-toting Batman with a rat as Robin. She visits herself in high school where she briefly runs into her mom. She joins a pirate ship attack with a peg-legged Batman and a giant Swamp Thing bearing a saber.

She is transported to the Dark Mansion where she is Cain and several other characters. They move through the world of Adam Strange, the visit a prehistoric world complete with Batman and Wonder Woman dinosaurs and more.

Finally, they arrive on a watercolor world with a woman with a drawing pad leaning against a tree on a grassy hill. It turns out the woman is Meredith Clatterbuck. She didn’t realize what she was doing to DC continuity, she was just writing and drawing a fan comic. The Justice League Multiverse arrives to take Meredith, the source of the problem, into custody. To protect the innocent fan, Jonni DC raises the Anti-Monitor to defend them. They fight.

Everyone disappears and Harley is alone in a black world. She writes her own comic about her favorite person in the world – her Mom. Suddenly Mrs. Quinn appears and the two embrace. Continuity is restored. Meredith is sorry for almost destroying DC but is forgiven.

Finally, in NYC traffic, a car is destroyed by a projectile from above. Turns out the projectile is a big blond haired fellow named Captain Triumph who has been transported through time by what he believes to be an evil force.

Analysis: Writer Sam Humphries gives us a high concept story for Harley Quinn’s fiftieth issue. The issue is at heart a showcase issue for a group of artists, each given a double page spread more or less. The story itself is very loose and tissue thin. The one thing it does accomplish is that it highlights Harley’s close relationship with her Mother which is wonderful to see. The rest however is a mishmash plot-wise.

From a story standpoint this is a weak issue and so the score I am going to give it is going to be low. However, some of the art pieces are very appealing and I will likely be giving them a deeper look so there is value to this issue. There are some funny gags in the dialogue as well as visually. However, I will be looking forward to get back to a regular Harley tale next time.

Final Thoughts: Harley Quinn #50 is an issue that showcases some talented artists, which means there is sure to be something for everyone to look at.