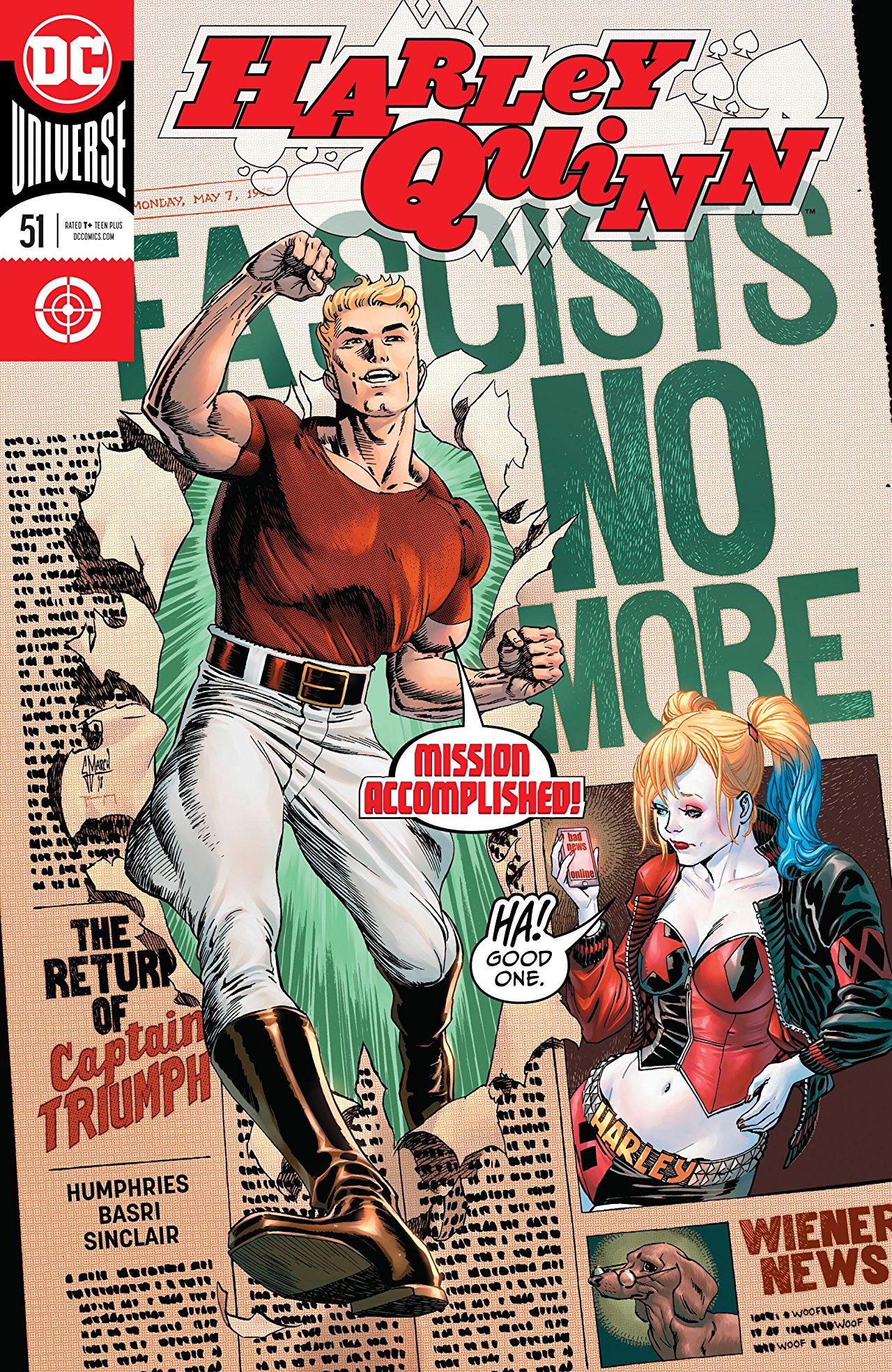 Overview: Captain Triumph, a golden age hero trapped in our time by Harley by accident, struggles to adjust to life in the modern world as Harley tries to make him feel better!

Synopsis (spoilers ahead): Captain Triumph comes to New York City, thrust out of time by the shenanigans in Harley Quinn #50, who is busy spending her time with her mom and reminiscing about her time with the Joker and life on the run.  While her mother lectures her about what she will do to the Joker if he ever comes back, Triumph shoots into New York City, out of time and with no idea about how the world works or what is going on. Harley is advised by the DC continuity cop that she is actually responsible for the appearance of Triumph in the modern world, and she reaches out to him at her mom’s insistence, as he escapes the governor’s mansion in a hilarious fight with Checkmate operatives.

Harley takes the out-of-time and confused Triumph to a ballpark, in an effort to make him feel better, and to show him that not everything he loves from the Golden Age has been lost. After a while, the magic breaks, and Harley blurts out that she (not the mysterious High Priest Sitok) is responsible for being there. Triumph doesn’t take the new’s well.

Analysis: On the surface, this is a slight issue but it is not without its charms. It certainly seems focused on thrusting Triumph into the foreground (my only exposure was his single appearance in a long-ago Grant Morrison JLA story), and Harley becomes the supporting character in her own comic. In a way, it’s quite a sweet couple of pages as Harley takes Triumph to events and places that remind him of his bygone – you can still play baseball in 2018, and you can still punch fascists, Humphries tells us, in a topical reference. It’s all played light and easy, which helps sell the action.

I was struck by the graceful styling of the art by Sami Basri, who does a rather suitably fitting generic “super-hero” job with the generic Triumph character, (is he Superman? is he Aquaman, the crowd asks, as we ask), but the design and little shades and touches of color on Harley by the art team are wonderful. I was struck several times in this issue by what a graceful and doll-like Harley is displayed in this issue – having read hundreds of issues, I’m always amazed by how many characterizations are available to the artists, how many different Harley’s compose the one.

Humphries treads a road we haven’t seen too much of recently in the Harley comic, which is a Harley fixated not just on the Joker in the rearview mirror, but also on her criminal past, the almost illusory freedom of life on the run, it’s lack of attachments and obligations. When we see Harley case a bank as she lunches with her mother, she’s lost in a nostalgia of her own, for the past, which she can’t have back, as her mother dutifully reminds her, it’s lost, it’s gone – much as Triumph himself is lost.

For at least the second time (if not more) Humphries uses what is quickly becoming a crutch; that of the DC continuity cop. I’m sure it comes across to him as hilarious in the scripting process, and the scene with the multiple Donna Troy’s is worth a chuckle, but I’m finding her intrusions into the narrative of a regular issue a rather unsuccessful and unfulfilling breaking of the fourth wall. She doesn’t need to be there – her comments about calling Jim and Dan don’t come across as fresh, but labored to this reviewer. I wouldn’t mind so much but it’s the second issue in a row and I don’t like this continuity cop that much.

All in all, it’s a slight but effective issue. Sam Humphries has the courage of his convictions and is going all in on his vision of Harley – he faces a substantial mountain to climb in the wake of the Conner-Palmiotti run, but props to him for punching out his vision. It’s a lot of fun. And it’s simply delightful that Harley calls him, Cap.

Final Thoughts: A good issue with some flaws, but an entertaining read nonetheless. Great art!