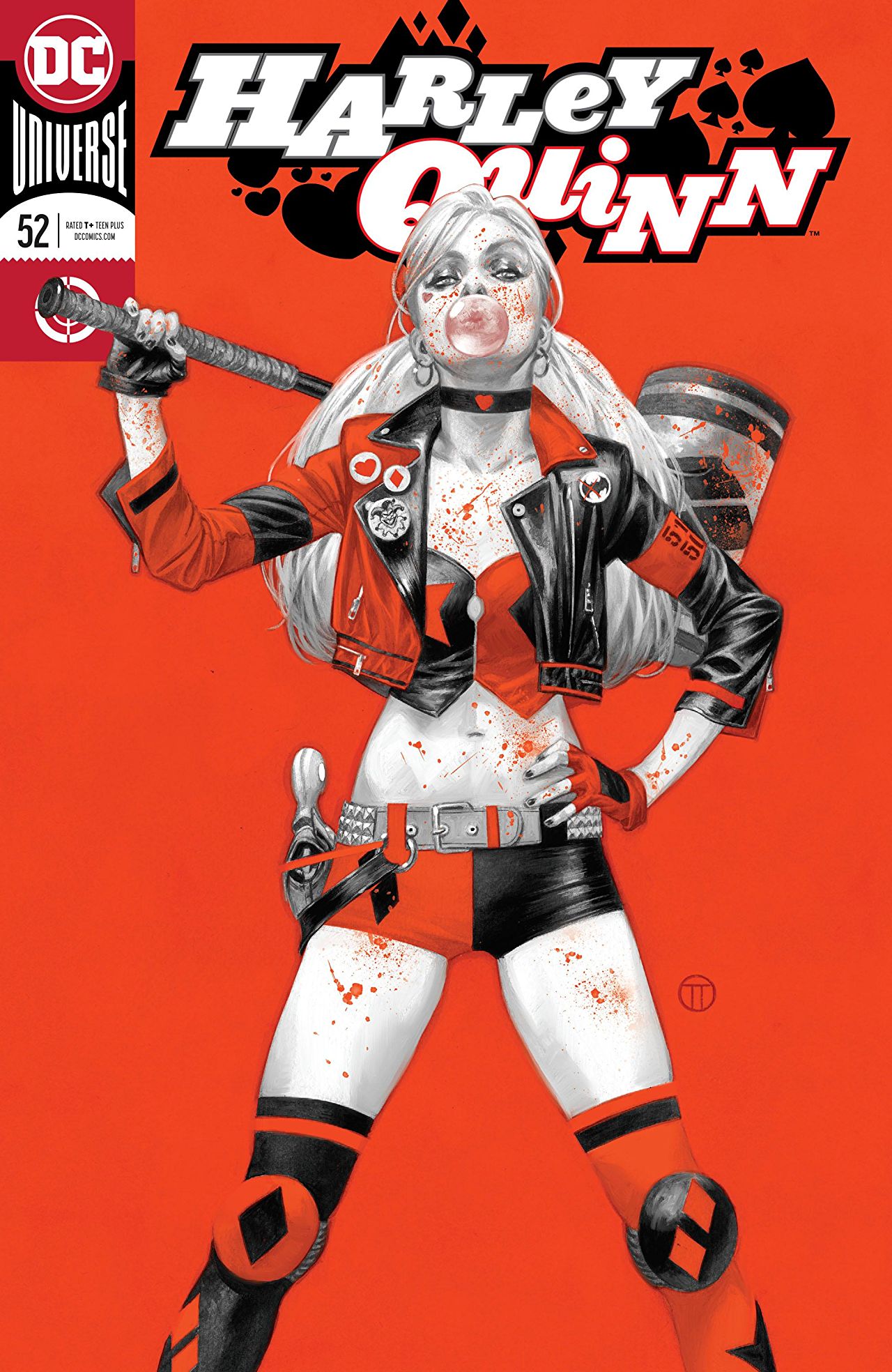 Overview: After Triumph explodes in anger over Harley causing him to be stranded in time, the two make up and Harley helps him gets back home by revisiting the site of his deal with the witches!

Synopsis (spoilers ahead): Following Harley’s admittance last issue that she was responsible for Triumph being dislocated in time, Triumph at first is exceptionally angry. He throws Harley through a shopfront window and almost drops her from the top of a building site before coming to his senses.

An exhausted Harley questions what she should do next and the DC Continuity Cop, Jonni Dc, tells her that having a Golden Age character loose in the 21st century is a major problem, and it’s up to Harley to bring him in again. She knows where he will be, at Nateman’s hot dog stand, having a Nate’s Classic with all the trimmings.

Harley and Triumph make up and she takes him back to the air-strip where he did his deal with the witches that gave him his powers after the death of his brother back during his era. The ghost of his brother, Michael, turns back up, along with all the extended family of his cohorts from the Golden Age. Triumph reminds Harley that “the only way out is to move forward” and leaves in a vortex back to his rightful time.

Analysis: Like the preceding issue in the Triumph arc, this is a slight but fun Harley issue, effecting a light and breezy tone which seem to be Humphries signature for the title.

Aided by beautiful stylized art from Sami Basri, who seems perfectly suited to the task of Harley in particular, this is an attractive comic that perhaps rests on some thin story foundations. It’s a complex task writing Harley. Do you turn her into a joke machine? Do you mine her for some unexpected pathos? The obvious answer is to go for both, but writing comedy is often the hardest part to master.

Humphries is doing nothing wrong with this title, but he’s not knocking it out of the park either. His almost curious reliance on the DC Continuity Cop, Jonni DC, as a storytelling device to me only feels more and more forced. I preferred the easy slam-dunk of Harley talking to her stuffed beaver. With each appearance, her inclusion feels more like lazy storytelling, rather than especially amusing. I can’t see why Harley just doesn’t turn to the camera and shatter the fourth wall herself. The repeated focus on the DC Continuity Cop, de-railing the story, just keeps the stakes so minimal and low that I find it hard to believe this is an issue that will prove especially compelling to neutral or lapsed readers. While the last issue at least had a good Donna Troy joke, this time Jonni just comes up empty, a storytelling crutch if there ever was one.

With that said, the breezy tone of this story does work as a piece. Triumph is essentially an even blander Superman, the ultimate straight guy foil to Harley’s brand of zany. And it’s zany rather than crazy-manic which Humphries seems to be going in his portrayal on Harley.

He’s helped by the art and fantastic coloring which gives her an almost porcelain doll-like profile, playing almost to anime-esque quarters. It’s fresh and it works. Frankly, in reading this issue I was more impressed by the art than the writing. I feel given a more solid and emotionally resonant story this could be an even better comic than the slightly above average one it currently is.

When Triumph warns Harley of the danger of romanticizing the past, a good line, and in sync with Harley checking out her old suit, and missing her days of robbing banks. I liked the beats but felt they were perhaps hit a little too distantly, lacking a certain vivid energy we have come to expect from the Harley Quinn title. Much like Harley, I find myself longing for the not so distant past.

Final Thoughts: A satisfying conclusion to the Triumph arc, as he returns to the past, and all signs point to the future for Harley. Who knows what will come next!