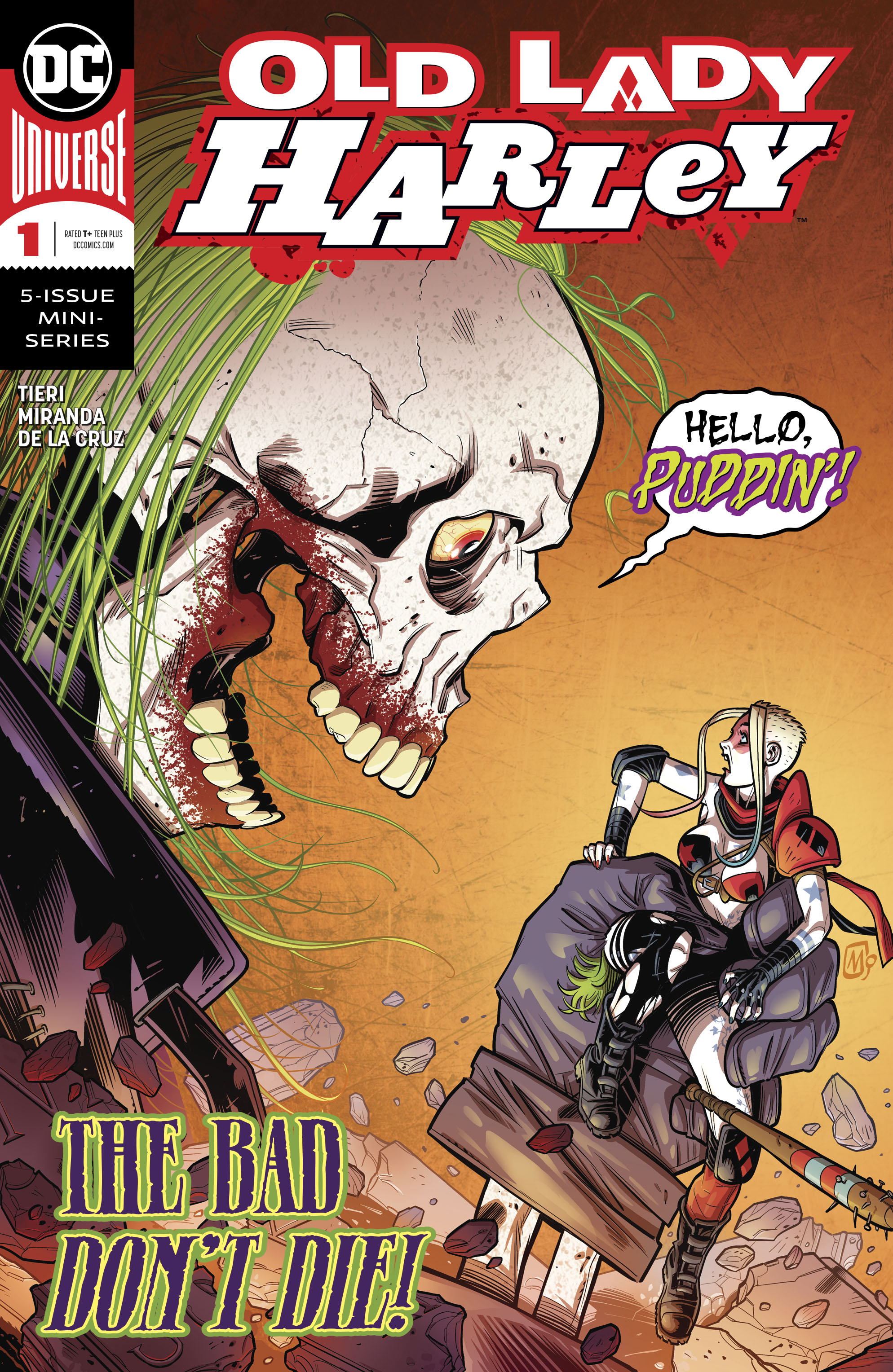 Overview: Harley and Red Tool leave the wastelands after an encounter with a rogue squid, and re-enter Gotham, on the possible trail of the Joker!

Synopsis (spoilers ahead): Picking up after the events of her introduction in the ongoing Harley title, Old Lady Harley and Red Tool are traveling across an apocalyptic world. A world where Luthor controls Mexico after the Legion of Doom invaded, clones of Cat Grant report the news of a nightmare world, where zombies overrun Canada and Condiment King is a commercial juggernaut. After Red Tool gets into trouble at a squid diner, for allegedly groping a waitress, they are on the run in the desert-scape, and after out-running the squids, the two of them encounter The Laughing Boys, a group of homicidal Joker wannabe’s who claim the Joker is alive!

After a quick evacuation from that scene, Harley and Red Tool journey to Gotham, speculating on the possible existence of the Joker. They quickly encounter Azrael, who tells them they are out of curfew, and after Harley takes his head off with a baseball bat, he is quickly revealed to be a robot, and one of many! After Harley and Red Tool are beaten by the Az-Robots into submission, they wake up…in the Batcave! And as they collect themselves, who comes down the stairs, but Batman Beyond!

Analysis: Frank Tieri’s cold open which shows a future run by Luthor and the Legion of Doom, with multiple Cat Grant’s reporting on a zombie-infested chaos paints a vivid, interesting portrait and sets up an intriguing template for Old Lady Harley to take place in.

Perhaps slightly unfortunately, the road-trip aspect of Harley and Red Tool is very reliant on puns and for my tastes it struggles slightly while out in the desert, moving away from the finer details of the nightmare future for a joke about unruly squid-people in a diner – bereft of momentum, staggering on corny, slightly funny bad jokes. This is a brief lull however and as soon as Harley and Red Tool exit the desert and enter Gotham, confronting a robotic series of Azraels, the jokes and the issue markedly improve and finds it’s voice. “This is the worst episode of Westworld ever”, Red Tool intones, and Harley exclaims, “I don’t know! Have you seen Season 19!” It is pithy, funny, and clever – a shining reminder of the sarcastic wit that is at the bottom of Harley’s delivery when she is being written well, and Frank Teiri certainly knows what he is doing with the character. His recent work with Harley has impressed me.

What is particularly interesting about the world being set up is that there is definitely some depth and some darkness here. The Insert Mindchip at the start had a taste of a many a cyber-punk tale, in a good way. The art by Inaki Miranda shines when he has a chance to play in shadows. Working with a great colorist, the real drama is added to these scenes. The story inside a future Gotham absolutely sings, because although she has changed, the world around her has changed and it’s for the worse.

When we look at Harley and the choices that she made to become Old Lady Harley, Frank Tieri is clever. The turning point which forced Harley out of Coney, that took her from the present, is that she killed the Penguin, at a point where her regular self in normal continuity didn’t. It’s not over-played in the story but she walked away from the Gang of Harleys and her friends, she found Joker back on the street corner, his eerie grin leering from a limo. She took that step back into him, and that colored her future, darkened it. And yet, she’s still Harley, and the relationship with Red Tool sparkles.

Unlike the comic that this riffs on, Old Man Logan, Harley isn’t a broken down disillusioned wreck of the person she was here. She’s essentially the same with a buzzcut. The puns, which on the surface seem slightly tiresome, are still very much her, and for the true believers, there’s a lot of juice in this tale. This is a title to pick up if you’re a Harley fan. Doubters, take a chance. It’s fun.

Final Thoughts: A fast, fun issue that flies on the strength of its puns, Old Lady Harley #1 is a nice slice of Harley madness!