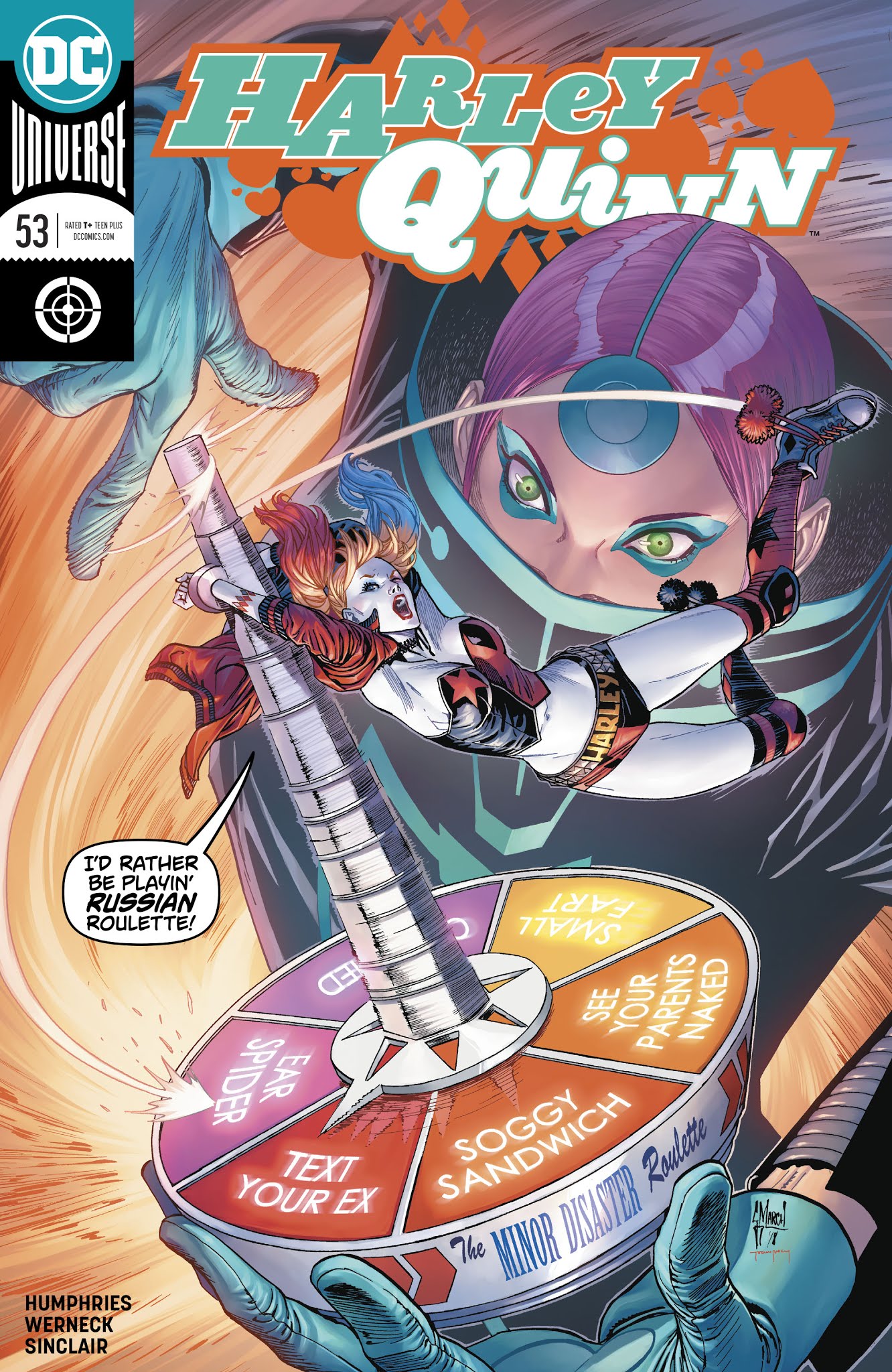 Overview: Facing a costly bill from recent events, Harley has got her own YouTube channel, and is getting increasingly desperate for views and likes!

Synopsis (spoilers ahead): Following the events of the recent Triumph storyline, Harley has been drawn to outrageous stunts which she performs for a selfie stick, seeking views for her fledging YouTube channel, as she seeks to raise revenue to pay back bills for the damage during the recent escapades with Triumph.

Meanwhile, another would-be reality star has hit the scene, the daughter of the super-villain Major Disaster who is desperate for his attention. She has a disaster dial, and she’s ready to destroy Coney Island and wreck havoc to try and win the affection of her distant dad! Unfortunately for her, the adjustments to reality seem minor and extend to breaking up a relationship by causing a fake phone call from an ex. At her lowest though, she suddenly notices Harley has over a hundred million subscribers, and she realizes if she schools Harley in front of the whole world, her dad (and the world) will have to notice! And quite touchingly, she calls herself Minor Disaster.

Back in her apartment Harley is crunching the numbers with Coach, who is telling her that unless she tries the next outrageous stunt, with each one better than the next, her numbers (and her revenue) will plummet. But Harley’s mom has different ideas, letting Harley know that she’s pandering to the audience rather being her genuine self. Harley reflects- and decides to go crazier!

Harley is devastated and depressed, and Harley blogs her emotions on her phone, which are all over the place. Minor Disaster twists her dial again, and Harley accidentally sends the emotional message to all her fans with all her doubts, and she faces…humiliation!

Analysis: As a commentary on the YouTube culture, this issue is effective, even as we are thrust right into a story of Harley trying to raise some revenue without much lead-up. Consistent slightly “dirty” art is good but not great, and keeps this title firmly in the B-class. In so many ways it feels like Humphries is “halfway there” with his current run – without escalating to great heights or providing anything exceptional, he is a solid content provider for Harley fans. She could be in far worse hands. Even though I personally as a fan have read far better and more interesting Harley (both in recent years with Conner and Palmiotti and on such series as Gotham City Sirens, now available in a nifty omnibus) there is no doubt this is a solid read.

The inclusion of Tina after the adventure on Apokolips is a wacky and sympathetic foil to Harley who is defnitely deep in the crazy on this storyline. We’ve heard so many times that new writers on the Big Two titles love to develop their own characters, and sometimes that works, sometimes it doesn’t. Considering how wacky the Humphries has been (without being particularly amusing) it’s to his credit that such a bizarre confection as Tina is working quite well within the stories.

So what to make of it all? All the nuts and bolts are in place, this isn’t a bad comic book, but this run could improve. As satire, this isn’t challenging stuff, and as comedy, it’s a chuckle at best. For the first time in a while, Harley is looking a little thin in her own book, running on routines that are getting ever so slightly stale. There is room to improve.

Final Thoughts: A clever commentary on Youtube culture this issue succeeds as a fun Harley issue with good art, but I can’t help but feel Humphries has a little more game in him than this.