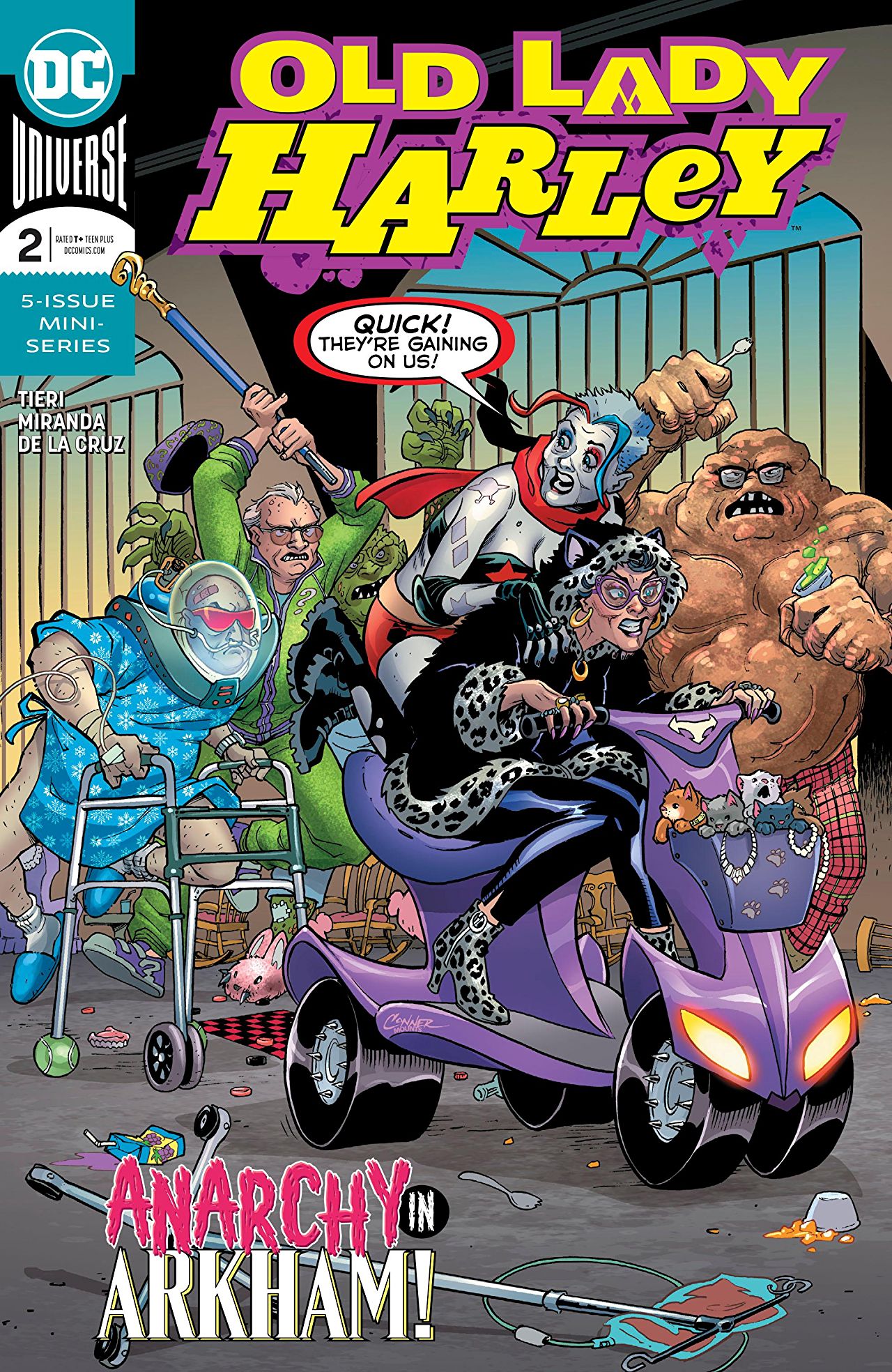 Overview: Harley and Red Tool meet up with the future Batman, and then travel to what has become of Arkham!

Synopsis (spoilers ahead): As Harley reflects on her past with the Joker after they reunited, it’s clear he was just as crazy as ever, hurtling towards destruction while pacifying Harley with the lie of a no-kill rule.

Back to now, Harley and Red Tool have come to the Batcave where they quarrel with a hard light hologram of Batman Beyond. It quickly turns out the real Batman is still around, a Bruce Wayne, aged and battle damaged, who has connected himself to a whole network of robots via the Bat-Computer – he has become a near-omnipresent savior of Gotham, he has eliminated crime, at the price of what was left of his humanity, confined to a chair, his consciousness filtered through a nightmare network of machines, desperate to quash rebellion and disobedience.

It all seems a little extreme (though quite in keeping with how Batman is often portrayed) to Harley, and she questions if it is all a reaction to how Nightwing (revealed to be her ex-husband!) was killed. Bruce says that he was affected by Dick Grayson’s death. Cyborg helped him merge his aged body (he looks like Darth Vader out of the suit) with the Batcomputer. Both his and Batman’s failings have been overcome by having robots everywhere in Gotham, all the time.

Harley has her reservations, but she’s also focused on her potential fear that the Joker has returned, worse than ever. Bruce is smiling as he says he knows the Joker is dead. However, he says the person to ask is Catwoman, currently residing in Arkham, as she was there when he died.

Harley and Red Tool head off to Arkham, now a retirement home for aged Batman rogues. Harley’s old friend Eggy is essentially running things, giving the aged crooks their meds and their meals. Harley quickly finds Catwoman, who has conveniently lost part of her hearing, now married to Killer Croc (who is also revealed to be another ex-hubby of Harley). After some discussion, Croc and Catwoman (now on a motorized wheelchair) take off on a teleporter headed for Vegas where Lobo (who apparently killed Joker) is based. As they take off, a collection of Joker Boys mess with the teleportation coordinates, and instead of Vegas, our fearsome foursome wind up in Bludhaven, now a prison city!

Analysis: There is a lot to like in this issue. Frank Tieri once again proves his writing chops with a clever satire on the Batman Universe, filtered through the eyes of a Harley who has seen just a little more life than our regular Harley. The scenes with Batman doing his best “Vader without the mask” impersonation are quite chilling – there’s a large slice of rapier-sharp satirical observation in this book, the comedy and sarcasm of Harley and Red Tool in this nightmare dystopian future world sprinkled cleverly over the bleak edginess. Unlike a core Batman book where Bruce is often given a little room to be excused for his controlling nature, in this one, Harley and Retool can scarcely believe what they are seeing in the Batcave.  The jokes about Big Brother oppression are cutting and true.

The opening page of the news broadcast again by Cat Grant clones display a fine sense of comedy and existentialist dread – zombies swarm the Canadian-US order, their undead PM bites the (supposedly invulnerable) arm of President Power Girl, as Overlord Lex Luthor negotiates for Lexico, his super-villain state, to be recognized. In so many ways this comic has so much darkness and clever edges than you expect it too – it’s a strong piece.

The art by Inaki Miranda is strong, perfectly stylish and somehow bleak, in fitting with the whole theme of the book. The shadowy memories of Joker bring out his eerie creepiness, his death wish personality that didn’t want to ever stop, could never stop when the Justice League came. Miranda’s Harley, a slightly punkier version of regular Harley, is pitch-perfect, She is seemingly not as old as the other characters in the comic, but wise in her way too, damaged by the world and what it has become and done to her.

And yet for all the darkness there’s laughs here too, of the sarcastic kind, the kind that keeps the darkness away just a little longer. This is a book to watch and collect. It’s a modern classic.

Final Thoughts: A compelling future take with strong characters and a sense of style – this is an excellent comic book series. Old Lady Harley has some surprisingly strong legs, both as a character and concept. Highly recommended.