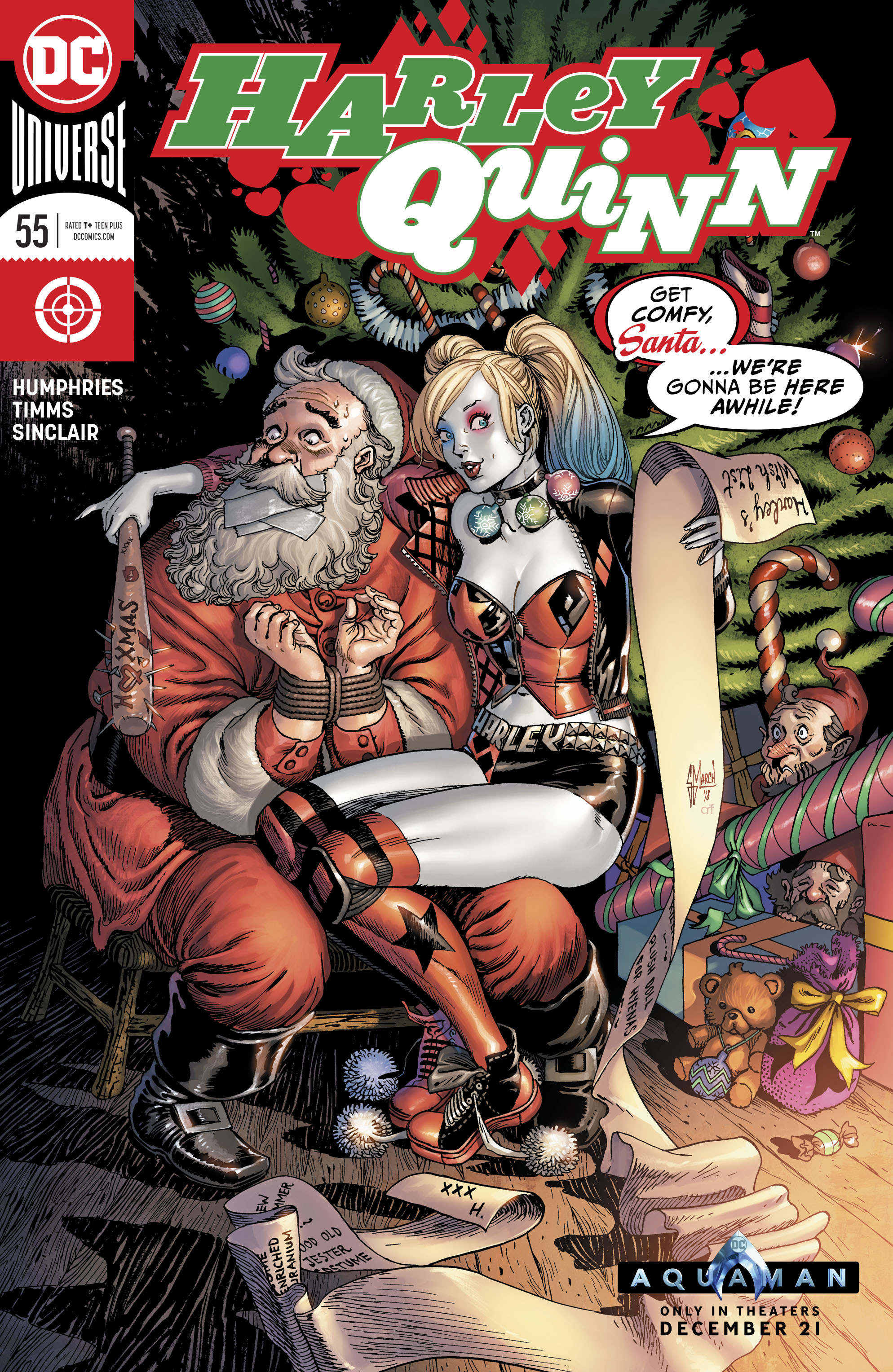 Overview: In this holiday issue, Harley is excited about the festive season, and woe betides anyone who stays in her way – but red alert, her family is visiting. Unfortunately this one has a sting in the tail.

Synopsis (spoilers ahead): That action kicks off on the snow-strewn sidewalk, as Harley announces nothing is going to stand in the way of her celebrating Christmas. That is until her own family turns up literally on her doorstop! Harley is very suspicious of their presence, but she is distracted by the many tasks she has planned for the big celebration party she has planned, which include an ice sculpture designed to be an abstract representation of peace, joy and presents! Unfortunately her death-metal loving brother is shredding on his guitar which shatters the sculpture, while another brother has a phalanx of drones buzzing through the apartment, destroying her food when his phone dies and he loses control of the drones! Santa aka Harley’s dad comes in and squashes a prop chair, while her youngest brother has set fire to the tree itself!

As Harley confronts her family, they confront her with a horrible truth and the reason they are there at Christmas – Harley’s mom has cancer. Harley flees the room, but her mom finds and talks her off a literal ledge, promising her that she has seen a lot of doctors and there are still treatment options. Harley goes back to her family, and declares a good, old-fashioned FOOD FIGHT! Harley’s mom takes a photo of everyone, Catwoman included, (Harley’s little brother asks her to marry her and Selina responds, “Its complicated”) and Harley is happy that her mom brought her whole family back to her for Christmas, in the end.

In a cliff-hanger ending, a super-powered somebody appears from the volcano where she tumbled into from the sky, and declares the trials are about to begin!

Analysis: For anybody who has experienced the pain and grief caused by a cancer diagnosis to a loved one (and at this point, who hasn’t, given that this diseases touches just about every family unit to some extent) it must be remarked how well this issue touches upon that topic. It’s a fundamental mood swing in a book which predominately caper-based but the emotional beats are well earned and feel realistic within the confines and stakes of the book. It’s obviously going to be a big subplot of the book in the immediate future, and given how Humphries handles the reveal, I feel confident this will be explored well. Speaking purely as somebody who has experienced a number of family and friends go through cancer, I felt kind of proud of the creative team behind Harley Quinn to tackle this topic in a way which is so close to the heart of so many.

The art from John Timms is very consistent with the tone of the Harley Quinn title – it’s a cartoony vibe, with nothing too serious on the surface, but the full page reveal of Harley’s mother’s condition is sold well off the page – it’s very well done.

The exclusion of Poison Ivy from the Christmas proceedings was telling – given her prominence in the Harley title for some number of years now, to not have her at the dinner (while Selina was there) unfortunately feels more like an editorial mandate than anything else. In an issue which leaves Harley adrift, and upset, the presence of Ivy would have been nice to see. perhaps she will come into play in later issues. The tease of the trials was appropriately off the wall for the Harley title, and if there’s one thing we know, Harley won’t stay still long. Our gal will keep moving!

Final Thoughts: Another good issue by this team, this one handles a sensitive issue well, providing an insight into how Harley handles such distressing news. This is an excellent issue and hits in the heart zone.