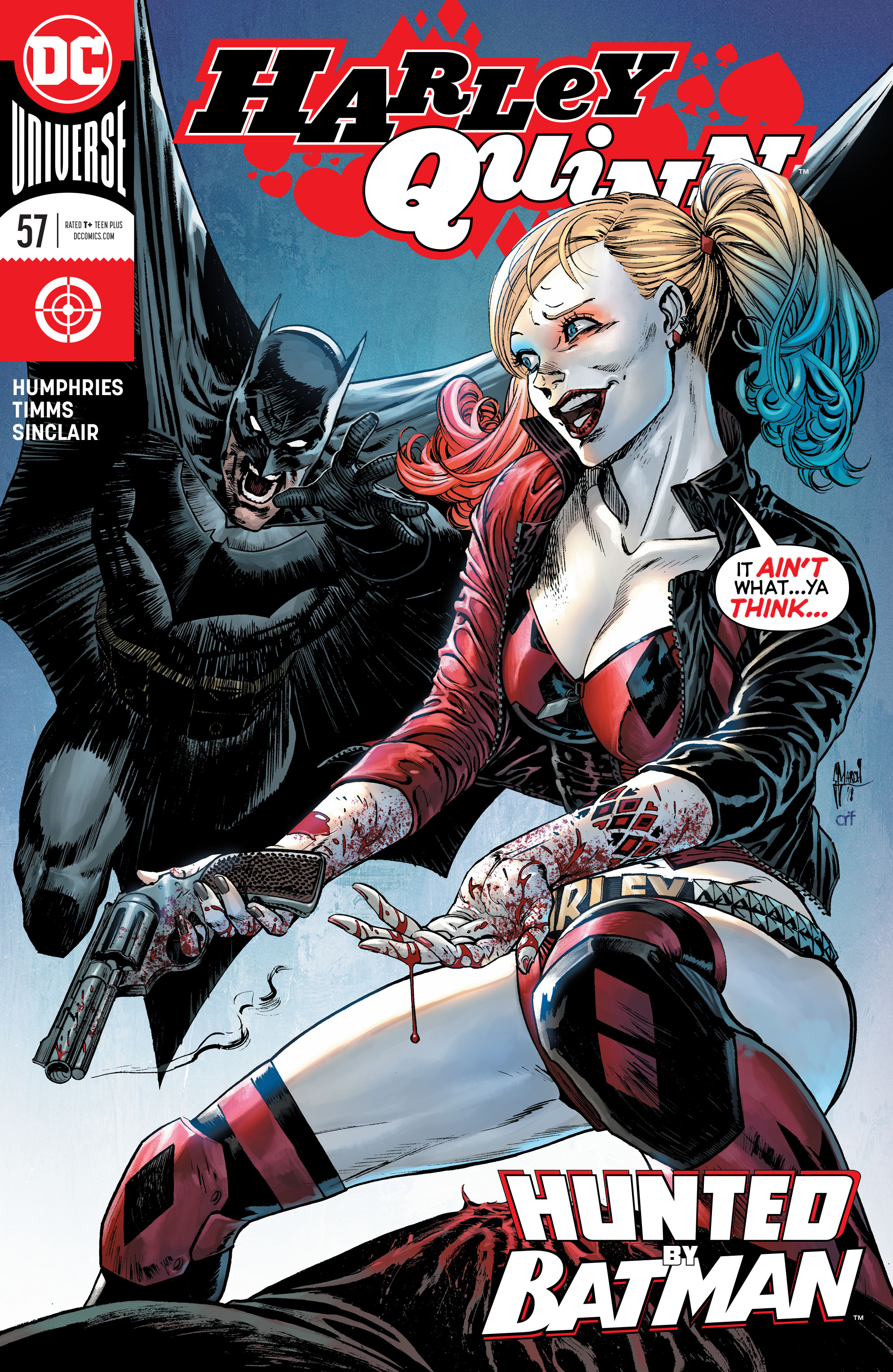 Overview: Harley is hunted by Batman after he suspects her of trying to frame the Joker with a SmyLex death! Meanwhile, Harley is subject to the trials to become a Galactic Angel of Retribution!

Synopsis (spoilers ahead): Harley is ruminating on the complexities of life when a portal opens, and the Lords of Order and Chaos have selected Harley to be subject to the trials – in order to become a Galactic Angel of Retribution! Mirand’r, who is from the planet of Tamaran, explains she is a herald and offers Harley the opportunity to become a Galactic Angel of Retribution. Harley eagerly accepts – seduced quickly by talk of a Flaming Sword! And quickly the trials begin…

Meanwhile, in Gotham City Gordon uncovers a body which has been subjected to SmyLex, the trademark of the Joker, however, Batman feels this is too obvious a setup and after discovering strands of blonde hair, and the timber of a large mallet, his suspicion leads to Coney Island for Harley Quinn!

Back in NYC, Harley is visiting her sick mom but is banned from the hospital, and can’t sleep due to bad dreams (in comic book form) and her tension. She goes out to have a walk and runs into Batman! Frustrated she takes a swing at him with her hammer, connecting, but Batman is looking to talk. They talk alright – while fighting! Batman is probing at her, questioning her about her feelings for the Joker, while she also has a few jabs, asking him how his wedding went! Batman then announces that he knows Harley is irredeemable. But Harley just wants to be with her mom and doesn’t understand why nobody will listen to her.

Back with the corpse that Gordon found, it suddenly wakes up in the Gotham morgue, announcing in a sinister tone that Harley and Batman are falling right into his trap.

Analysis: This is a decent issue which floats around the average marks without ever really going too far to exceed it. There is an obvious effort by Humphries to move the story along to a new phase by incorporating the Trials – it’s too early to see how effective this will be. Personally, I feel the need to “go cosmic” again, not long after the Apokolips arc, is probably a mistake when there is a compelling character story to be told with Harley’s mother and her own redemptive arc. It really does feel that in trading away Poison Ivy and the recurring larger cast of Harley’s friends, instead we are being given an entree into another cosmic arc which leaves this reviewer feeling tired rather than thrilled.

With that said, the actual meat of the issue, which is the brawl with Batman, is worthwhile and fun. The two of them trading barbs as they fight adds some flavor and heat to an otherwise relatively weak issue. If we look at the reasons for that, they are rooted in character and solid dialogue, not cosmic hijinks. The fact that Batman considers Harley unredeemable is interesting, if rather sad.

The relationship with Harley’s mother, with Harley being banned from the hospital, is proof again that DC and editor are quite uncomfortable with Harley venturing too far into an “antihero” status which was the feature point of the Conner/Palmiotti run – while there is a sly humor in Batman referring to her crazy villainous plans of years gone by, there is also the fact that the doctor shows a picture of Harley hitting somebody with a hammer while dressed in her own costume, and killing SOMEBODY. Is this a reference to Heroes in Crisis, where it’s hinted (but not spelled out) she may have killed Wally West? I don’t know but it’s interesting. For my money Sam Humphries is perhaps not the man to navigate these waters – the deeper we go into his run the more I am struck by indecision and weak plots, rather than witty capers and good character work. No doubt some of the choices are editorially driven but the basic plot work isn’t compelling either. Good consistent art won’t keep this title from drifting lower down the sales charts and it’s worth noting that this title is moving from a fortnightly schedule to monthly. Having reviewed Harley titles for many years I do believe a change in the writing team might be needed to ensure the longevity of the solo Harley Quinn title.

Final Thoughts: Despite nice artwork, a lackluster story cannot lift what is a very average issue. Momentum is a concern on the Harley Quinn title at the moment.