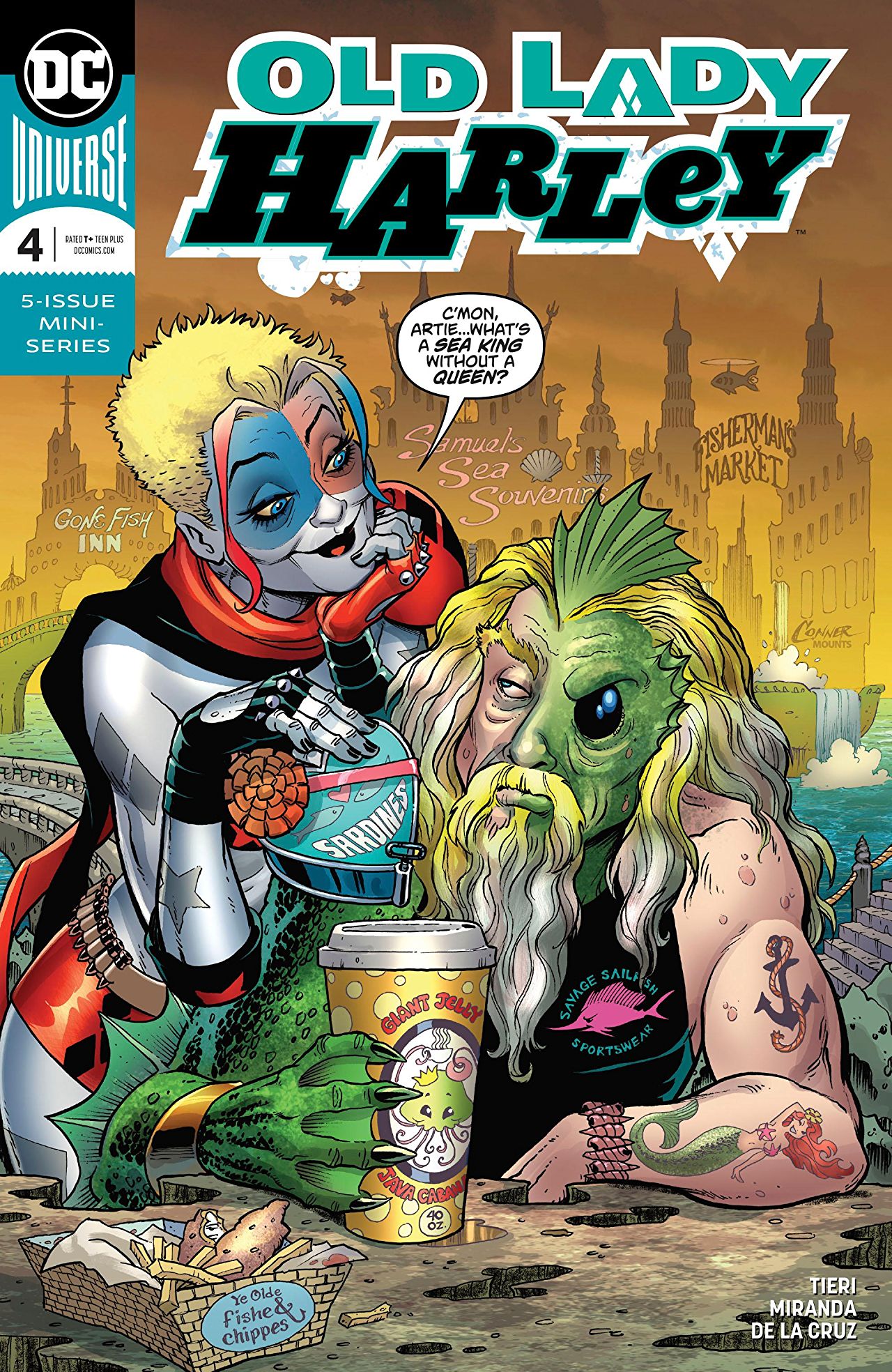 Overview: Harley and the gang travel to Vegas, meeting Mayor Lobo, and crashing a summit, en route to meeting her oldest flame!

Synopsis (spoilers ahead): This issue opens with Harley reflecting on her action post-breaking up with the Joker, a succession of violent incidents against the many things and people that reminded her of her ex whether they be mimes, children’s performers, circus clowns, and the lame Joker wannabes that sprung up in the wake of Joker’s apparent death.

Cut to Las Vegas, a bloated, balding Lobo wakes from another night of debauchery. His holo-assistant tells Lobo the only ex-wife who doesn’t hate him has arrived aka Harley. Lobo quickly takes a tablet to reduce his flabby weight and puts his (sentient) wig on his head and goes to meet Harley. Harley and Lobo meet, amidst much smooching, much to Red Tool’s chagrin!  Lobo is revealed to be the mayor of a corrupt, sprawling Vegas (well, that hasn’t changed), revealing that after President Starro signed the alien immigration act a few years back, all the aliens came to Vegas, attracted by the hookers and gambling, and it needed somebody like the Main Man to keep them in line! Lobo takes them to his favorite strip club where Harley and Julie Newmar-esque Catwoman strippers cavort and grind.

As Red Tool finds pleasure in the hands (and chests) of a multi-talented, well-endowed stripper, Harley sits down with Lobo, who explains that Joker is dead and that in the attack on the Joker, Aquaman accidentally killed Joker with his trident, not Lobo. As Aquaman had a goody-goody rep to protect, and Lobo didn’t, the Main Man took the credit for the hit.

Lobo tells Harley that the Joker is burned in New Atlantis, which is where she goes next, hot on the trail.

Frank-Frank gets Harley, Catwoman, Killer Croc and Red Tool to New Atlantis, disguised as mermaids, and Harley is disgusted to see what has become of New Atlantis – commercialized and gone hipster! As the Joker Boyz stalking Harley do something nefarious to the fish, Harley gate-crashes a summit taking place under the sea, comprising of Lex, President Power-Girl and an aged and decrepit Aquaman. Quickly it becomes obvious that something is wrong with the fish outside the tank, so crazed not even Aquaman can control them. As maddened sharks quite literally crash the tank, the Joker Boyz seize Harley, teleporting her away from the gang, to an aged and crazed Joker, who creates her with glazed eyes, a manic smile, and a creepy invitation to sit with him.

Analysis: This issue is where Frank Tieri, in my mind still an under-appreciated writer, is starting to cook with real gas and have fun with the story. There’s nothing for Harley fans to dislike here and a lot to LOVE. The story is fast and fun, and the near-future world Tieri has created as the backdrop is fun and rich. Lesser creators wouldn’t have half the fun he is having in this. The balding fat Lobo is genius – everything is filtered through a broken mirror, age is kind to nobody, to no convention. The Catwoman and Harley strippers working the stage are another example of the sly black humor at work here – “somebody owes me royalties” Harley murmurs. “That makes two of us”, replies Catwoman. It’s droll, to the point, and pretty accurate. It’s not a giant leap from what popular culture has already done to them. In some many ways, the future is now.

Inaki Miranda remains on art duties here, hitting it out of the park. The look of this book is important – it’s almost “normal DC”, it’s almost Harley’s”normal world”, but it isn’t quite, and the art with its bizarre random wildness and aged superheroes and aged supervillains reminds us of that. As we careen toward the end, the stakes merge from cartoonish to violent to touching- it’s Harley understood at last, and when she comes face to face with Mistah J, we are no longer certain what her future holds, so jarring and full of edges this present has become. This is a good issue.

Final Thoughts: This title hits it’s stride – with fast slick storytelling and cool art this is one of the best titles on the shelves from DC!