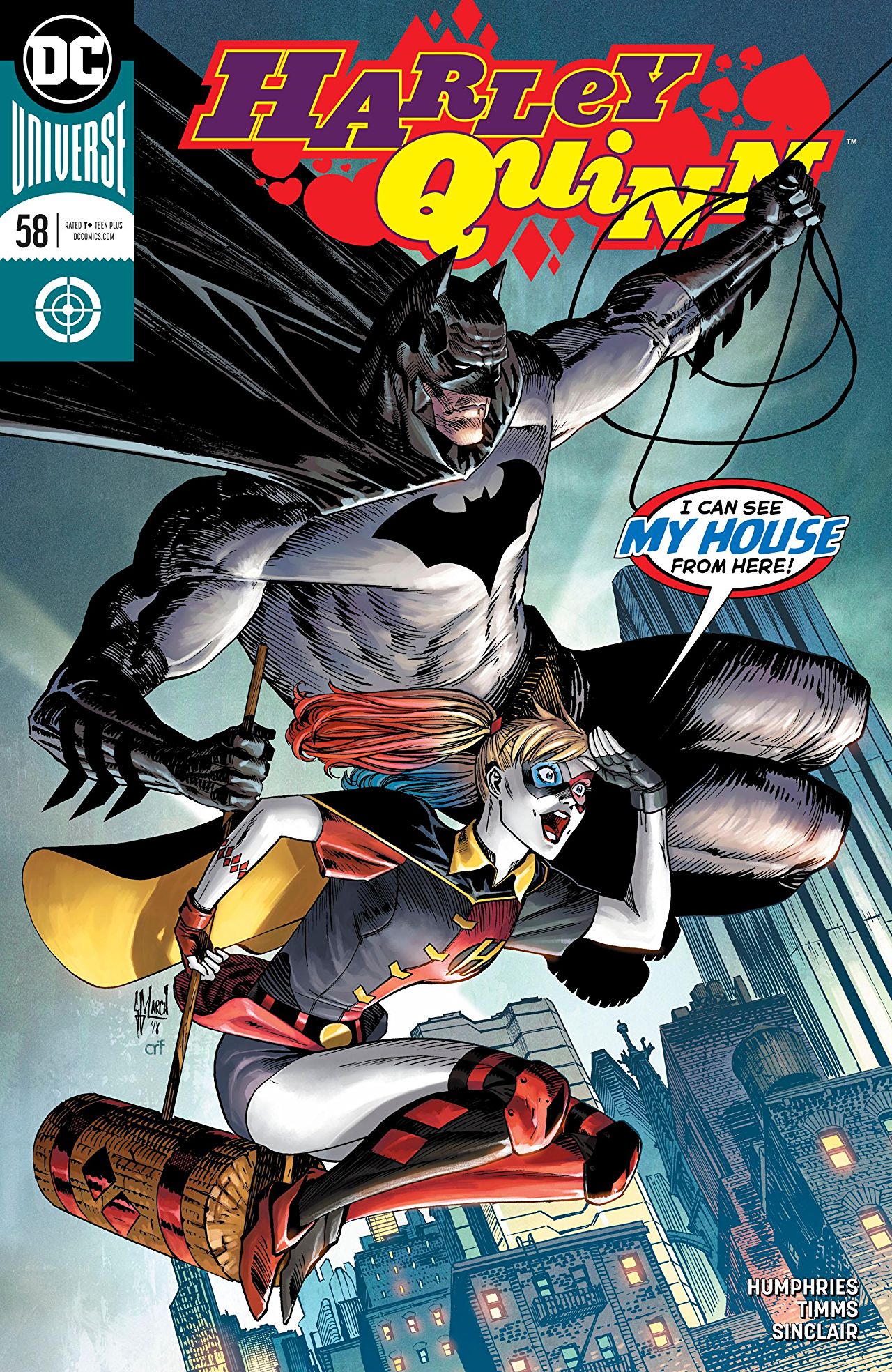 Overview: Harley is Batman’s would-be partner as together they try to solve the riddle of the corpse which appears to implicate her for murder!

Synopsis (spoilers ahead): Batman has driven Harley to the Batcave as he investigates the circumstances surrounding the corpse found in the last issue. While Harley professes her innocence, reminding readers to be quiet because Batman doesn’t like anyone breaking the fourth wall, Batman continues to study the evidence. When Batman starts to consider turning her over to the cops, Harley states she can prove she’s innocent and attaches Bat-Manacles to herself and Batman until they can solve the case!

They go to the victim’s house in his gated community, to find a stoner chilling out on the couch with a blunt, a brewski and a pizza! It is quickly established that this guy is just a house-sitter and he indicates that the good doctor is in fact NOT the corpse in question, and Dr. Regelman is in fact at Badhinsia Island, where he has a holiday home.

As Batman investigates, Harley finds a cookie crumb, which as a member of The International Chocos Fan Club, she knows has been imported illegally!  They head down to Breyogle Docks (a nice nod to the late, great Norm Breyfogle) where they find a warehouse registered to Dr. Regelman, where there is a cap belonging not to Gotham Knights, but to a Japanese team, the Kochi Gorillas. The police turn up at the warehouse, and Batman and Harley make their escape into the Bat-Jet before ejecting back on a rooftop.

Batman is still convinced of Harley’s guilt, but Harley tells him she never wanted to be the bad guy, she’s changed. Below them, a woman is attacked by a man, with her child right by, and Harley hurtles down, putting her life on the line to help. Harley attacks the man with her hammer, and Batman ties him up. It turns out the guy is a crazed stalker. This gives Harley an idea.

She stages an entrance to Arkham, with Commissioner Gordon taking her in. Out of the sky comes Lord Death Man, here to save his “cherished orange blossom”! Quickly its revealed that he is stalking Harley, and she hands him a can of whoop-ass, while Batman takes care of his hired thugs. Harley smashes his skull in with her hammer but it’s revealed very quickly to Batman that Lord Death can’t die! It turns out Lord Death Man orchestrated the whole event just to frame Harley and then capture her attention by rescuing her from the prison she would be sent to.

With the situation clarified, Batman offers to give Harley a lift back to Gotham and recognizes that maybe she has changed. Harley is overcome with happiness, and just as she starts to celebrate her belt buckle sparkles and Mirand’r appears! She’s passed her first trial, but don’t get too comfortable, there are still five left!

Analysis: This is a Batman-heavy issue of Harley Quinn, which some readers may have a problem with, but Humphries handles the characters well and in fact, the interaction between Batman and Harley is the key highlight of this issue. By pushing Batman ever-so slightly into a more comedic depiction, and keeping Harley at her normal level, there’s a lovely ying-and-yang to the relationship which flourishes throughout this issue. In a sense, this is one of the less wacky issues of Harley, which fits given the sheer amount of Batman in the story essentially solving a mystery. Nobody could call this a deep issue, but it is a fun one.

The art by John Tims and Alex Sinclair is extremely consistent, but a couple of pages really sing, such as when Harley and Batman swing across the skyline, in a scene HEAVILY inspired by The Dark Knight Returns. Lord Death Man, not a villain I’ve been familiar with, is depicted extremely well, and actually seems to have legs to be a recurring villian. All in all, this is another solid issue of the Harley title and Humpheries, while still a relatively inconsistent performer on the title, is potentially trending upward. It will be interesting to see the fate of both his run and the title overall now that it becomes part of the monthly release rather than twice per month.

Final Thoughts: An inessential but fun chapter in the Harley mythos. The Batman/Harley interaction is a winner. This book remains a keeper!