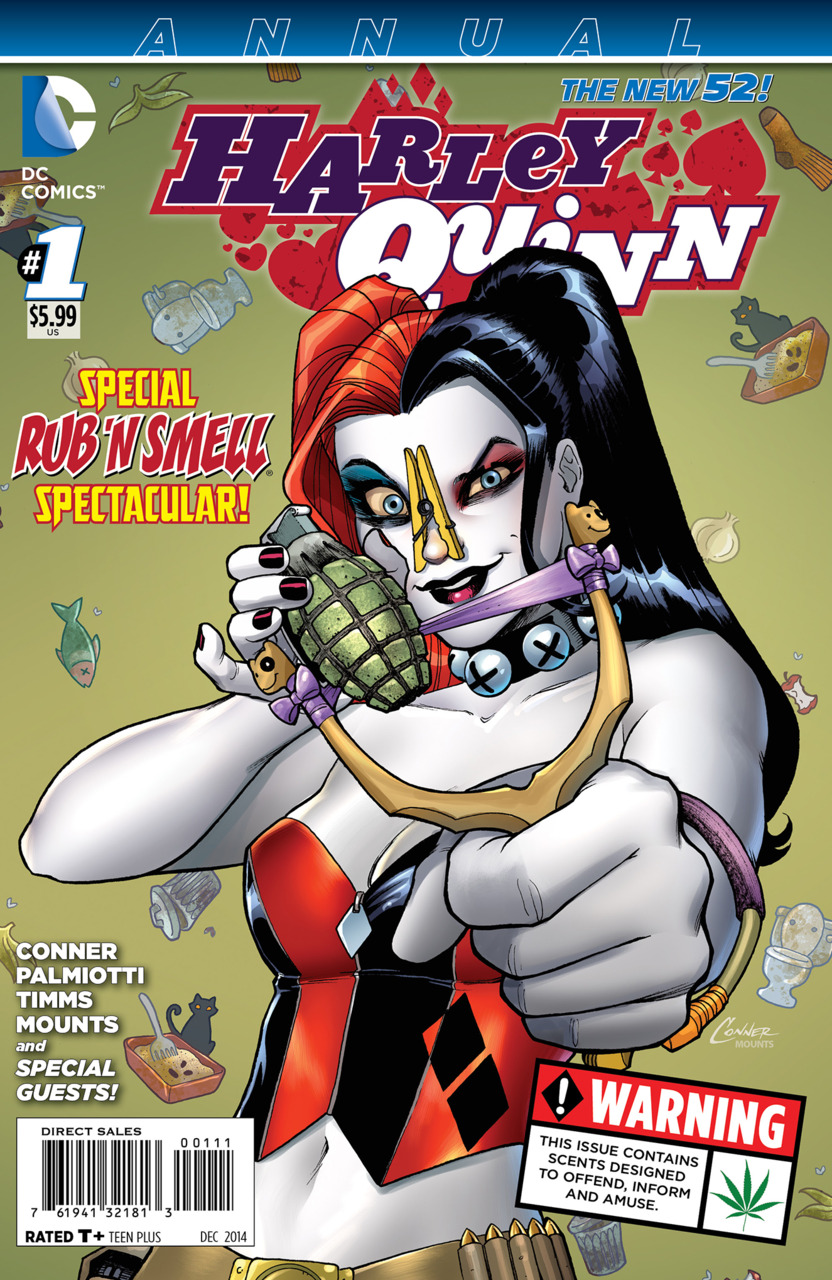 This is it!! The one that’s been making all the headlines and causing some heated debates amongst comic readers and non-comic readers alike. It’s “Harley Quinn Annual #1” featuring the latest in comic gimmickry…“Rub ‘n Smell” technology!! Not to be confused with scratch and sniff!! Because you don’t wanna be scratching up your beautiful pages. All you gotta do is give it a gentle rub and smell away.

So, what’s been causing all the controversy, you ask?? Well, it starts with the warning on the cover. “This issue contains scents designed to offend, inform and amuse.” You’ve been warned. No excuses from here on out! The cover features an illustration by Amanda Conner and Paul Mounts of Harley Quinn herself with a clothespin over her nose launching a grenade directly at us, the loyal reader! In the background? Oh, just a sea of rotten fish, kitty poo, toilets, garbage, smelly socks and yes….cannibis. You read it right. Cannabis. And that’s where the controversy stems from.

With that, I will now begin my very first TBU comic editorial with one of the most bonkers books these eyes have ever laid eyes on, and I’ve been reading the funny books for about 25 years.

This story is brought to us by the spectacular writing duo of Amanda Conner and Jimmy Palmiotti with John Timms doing the bulk of the art chores. It opens with our protagonist, Harley Quinn facing off against a platoon of Arkham Asylum guards. Harley quickly discovers that her gun doesn’t actually do anything other than be a cool accessory, as Harley breaks the fourth wall here and gives a little nod to the Bombshell variant cover by Ant Lucia.

Harley is promptly placed in her very own Arkham cell and we discover that it’s her longtime BFF, Dr. Pamela Lillian Isley (aka Poison Ivy) that has actually caused her current predicament.

Flashback to twenty-four hours prior where Harley is enjoying a leisurely day on the beach with her pals Queenie and Tony when she’s interrupted by a phone call from Ivy. Ivy has been locked up in Arkham and she needs the help of Harley to break her out. With that, Harley immediately jumps to the aid of her friend as she and Tony make a stop at their private munitions stash and then on to Kennedy Airport where they “borrow” some necessary equipment to break into Arkham via a big ol’ slingshot atop her apartment complex. Forty minutes later, after a botched parachute attempt landed Harley at Pizza Kingdom, Harley storms Arkham Asylum where we catch up to where we began all this craziness.

Harley proceeds to use her newfound pizza breath “powers” to get her past the Arkham guards and eventually find Ivy. Although Ivy doesn’t appear to be in too much distress. She’s working alongside Dr. Bruno Bash and Dr. Brandi Bliss and appears to be developing a new compound for them, a hallucinatory gas for a mysterious “Master Edgar”.

Harley makes her presence known only to discover that Ivy doesn’t recognize her at all. So, how does a Clown Princess of Crime awake a Poisonous Plant-lady from her daze?? Well, a big ol’ kiss, of course!! (You’re welcome, fanboys). But look out behind you, Harley!! Dr. Bash intends to take out Ms. Quinn by smashing a giant jar of the gas over her head. Bash is met with a roundhouse kick to the jar, freeing the gas, which is revealed to be none other than “Cannibisylocibe 7-A” sending our two Gotham girls and the Doctors into very real and strange hallucinations.

First up, Stjepan Sejic illustrates Poison Ivy dreaming of a romantic escapade with everyone’s favorite plant-guy, Swamp Thing. Her poisonous kiss makes quick work of him but never fear, Harley’s there too and the two decide to take a dip in a nectar filled pollen sac where they’re met by a smooth talkin’ giant bee. Awesome.

Next, we have Dr. Bliss’s hallucination brought to us by Joe Quinones on art. She envisions lunch time at the prison with some of Gotham’s vilest villains and Batman. A kicked piece of corn on the cob breaks through the prison walls and sends Bliss onto the beach where the patrons are attacked by Quinnzilla. Yes, Quinnzilla.

On to Harley herself with art by Ben Caldwell. Harley has a “Stupor-hero Team up” with Hurl Girl here as they face off against the Joker whom Harley believes is about to blast them with a “love gun”. No such luck, Harley. This gun is can change any human into an animal. Harley turns into a cat and Hurl Girl into a falcon. Harley Cat isn’t too thrilled with how Joker’s been treating her sooooooooo she scratches off his face, eats him, coughs up a hairball who comes to life and becomes Harley Cat’s new sidekick, Hairball!

Finally, Dr. Bash believes he is an inspector at Scotland Yard trying to solve the mystery of Jack the Ripper. Jack arrives and reveals himself to be none other than Harley Quinn! This bit was hauntingly brought to life by Kelley Jones.

All of our characters finally snap out of their hallucinatory visions and discover themselves sitting in front of a floating egg-man (eerily reminiscent of MODOK, for those of you familiar with that character). No, they are NOT still hallucinating. The egg reveals himself to be the mysterious Master Edgar! Edgar Fullerton Yeung, to be exact. He who had brought Ivy into Arkham to concoct this secret potion in the first place! Turns out, Edgar just wanted Ivy to develop this compound so that other people will like him. Not a lot of love for a Humpty Dumpty look-alike, I guess. As he begins to go into his secret origin, met with rolling eyes and clichéd speculation from his onlookers, he cries a single yolky tear earning him the compassion of our protagonist, Harley Quinn. Three hours pass and Edgar’s secret origin is revealed and to make matters worse for Edgar. he’s being evicted from his apartment. With no friends and nowhere to live, Harley brings Edgar home with her, gives him a place to live and even Tony gives him a job selling beer and popcorn. What more can a floating egg-man with 52 body hosts ask for??

Our story concludes with Harley and Ivy on the rooftop sharing a sunset proclaiming their eternal friendship and love for one another. Which Harley celebrates by revealing a bottle of cannabis gas that she swiped from Arkham Asylum just so we can get one last sniff of that controversial scent.

So, there you have it. Literally, one of the most insane things I’ve ever read. It was fun, it was crazy and lived up to the zaniness that is the title “Harley Quinn”.

And for those keeping count of all the crazy smells, here’s a checklist for ya!
– Leather!
– Banana Butter!
– Pizza!
– Cannibis!
– Edgar’s crotch! (Though it also smelled like leather)
– Pizza burp!

And a special thanks to Amanda, Jimmy and lil’ narrator Harley for sparing us the aromas of…
– Poo!
– Prison Food!
– Hairballs!
Although I am kinda curious about those. But that’s just me.