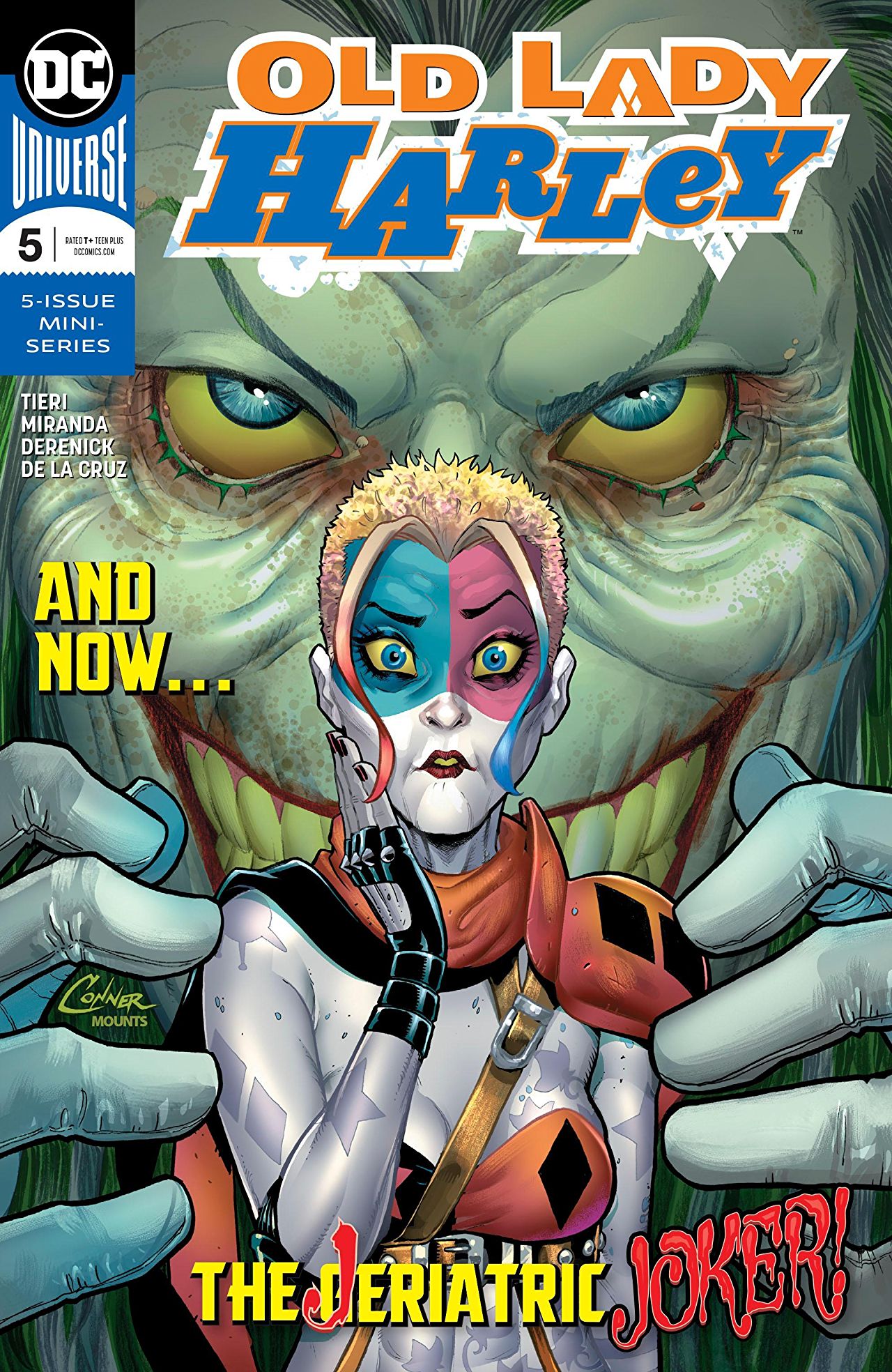 Overview: Harley and the gang come face to face with the Joker – only to discover that this reincarnated Joker is not the original Mistah J – but in fact her son!

Synopsis (spoilers ahead): The action picks up with the aged Joker taking control of the world-wide news channel as his Joker toxin sweeps across the world. Meanwhile, Harley is remembering the worst day of her life…in a hospital. Decades later, the Laughing Boys, lackeys of the reborn Joker, are fighting across Bludhaven, Las Vegas, and Gotham – where they face a transformed mechanized Batman! As “Batcavatron” activates, Old Lady Harley is fighting her own battle against the Joker’s associates! As she beats a few up, the Joker comments that the cost of this worldwide escapade has been high, as he hasn’t pulled a job in decades!

Killer Croc and the rest of the gang demand answers also on how Joker has survived, having found Joker via a tracking system Luthor has installed on every person on the planet. Luther also solved the problem of Joker’s Joker Fish and has loaded the skeleton of Joker, minus a head…whoever this guy is, he most likely isn’t Joker. So if the Joker is dead, who is this guy?

It all becomes clear as Harley explains she knows – this is her son. After her hookup with Joker again she had become pregnant, and in the hospital, she realized after all the crap Joker had put her through, Harley couldn’t raise the Joker’s baby. The Laughing Boys aren’t happy with this revelation. That’s why you have to die, they say. Joker Jr. is crazed, angry at Harley, so iced up that he has destroyed his own face in a grotesque parody and tribute to the original Joker. He’s all kinds of messed up! Harley admits she has failed him, saying she always thought he was her biggest mistake, but she was the mistake – and mistaken. One of the Laughing Boys goes to shoot her in the head but at the last moment, Joker Jr. shoots him!

As mother and son reunite “Batcavatron” bursts into the lair, demanding that this is the final warning. Screw Batman, says Harley and they escape in their airship.  Going to the ruins of Coast City, Harley shows them a secret location beneath a statue of Green Lantern where she has a secret hide-out of her own, and Poison Ivy waits, now a Jolly Green Goddess, part of the Green.

Meanwhile, in space, far above, a horrific robotic monstrosity housing what seems to be the Joker’s brain plots revenge on Harley and Junior. The end…for now.

Analysis: Frank Tieri and Inaki Miranda have weaved a compelling tale in Old Lady Harley since the beginning of this collection – what could have been nothing more than an amusing oddity has packed some emotional punches and heft to it, making this easily one of the books of the year for DC.

This issue is the climatic issue of the miniseries, and I have to admit that I was surprised in a gentle way by the revelation that the quasi Joker was Harley’s son. In a way, this is a series that I have not overthought as I read along, so it came as a satisfying (even if a somewhat safe) reveal. When the pieces are put together the end result is a feeling of: “well that was well done”. And the wrap-up, though fast, is effective. Could have been run longer, and deeper? Of course. Frank Tieri has built an interesting world with a certain level of depth that makes this whole series greater than the sum of its parts. By allowing us to come with Harley a couple of decades into the future we get a glimpse at a possible future which mirrors both our anxieties and her’s. This was a miniseries based on a fantastic ‘What IF” but still comes highly recommended.

Final Thoughts: A strong final issue in a strong series, one of the best Harley runs of the last decade. RECOMMENDED READING.