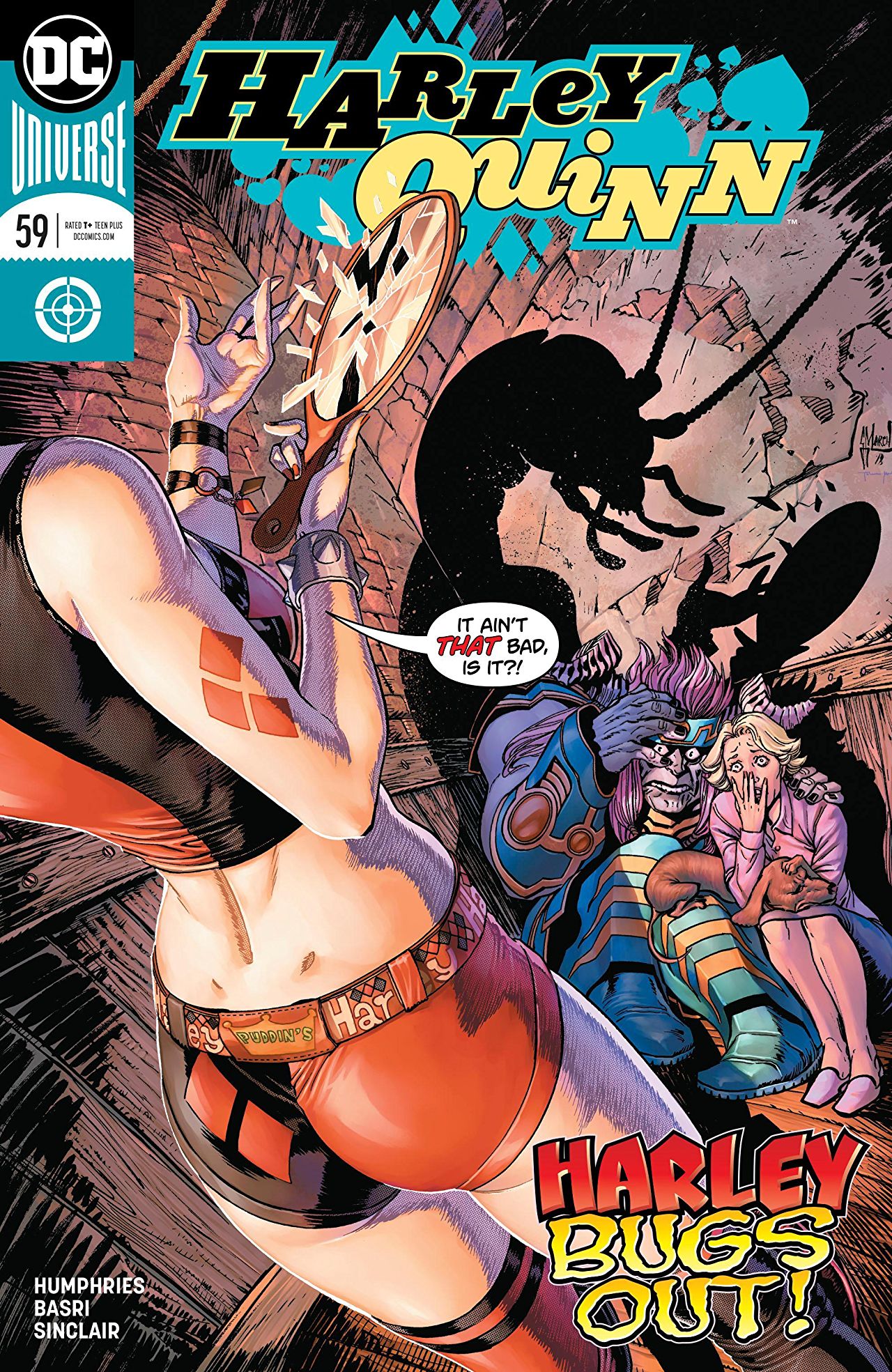 Overview: The wicked three witches cast a hex on Harley and she is turned into a monster! She must overcome the spell and the next trial!

Synopsis (spoilers ahead): Harley and Tina are busy entertaining the crowd at the Coney Island Fair, with Harley running her annual Dunk Tank for Charity, despite Tina’s trepidations over how people view her size and appearance. At Harley’s insistence Tina performs, but her tank splinters and cracks! As the crowd laughs, the three witches who have been shadowing Harley, cast a spell on her!

Cut to a day later, Harley has woken up with the head of a what appears to be…a monstrous insectoid! She rushes out of the bathroom, but Tina thinks she is a monster and does not recognize her! Her blind friend Coach, performs a touch test, and thinks the same! Meanwhile, Harley cannot speak and even her dog Nathan doesn’t recognize her!

The crowds outside are repelled and throw apples at her in disgust, while she has a craving for garbage! Meanwhile, her hands turn into claws and then as she hears Tina looking for her. She hides in the garbage container, as she feels some wings sprout from her back!

At this point Mirand’r turns up, crashing into Tina, and knocking over the container. Tina says she is looking for Harley and Mirand’r opens the container saying that Harley is right there. Tina then realizes that Harley is the monster in this scenario. Harley is meanwhile begging mutely to be relieved from the trails and Mirand’r schools her hard, asking if Harley really thought it was going to be easy, with the balance of the universe at stake. After a full-on inspirational speech from Mirand’r and some support from Tina, Harley realizes she hasn’t been attentive to Tina’s anxieties and insecurities, which relates to physical appearance.

Harley, while in full “monster mode”, goes back to the fair and the dunk tank, ignoring the abuse and mockery of the crowd. She finally realizes that the appreciation of the hackers is pretty cheap, and if that’s all these people have got for her, maybe she doesn’t need them in the first place! As she hits the water Harley is transformed back to her old self and the spell is broken. The witches are of course annoyed and depart heckling her. Mirand’r is thrilled that Harley has passed another trail. But the next challenge is just around the corner.

Analysis: This issue read very fast and was anchored by crisp clean art and a strong sense of internal direction. The little morality tale about outward appearance and inner ugliness was well placed and paid off nicely. It’s a simple little story that is perhaps just a tad too formulaic but it works.

Sam Humphries has a rather odd reliance on introducing a touch of a cosmic or supernatural tinge to his Harley work which I personally find slightly jarring but’s such an obvious and committed choice when we look at his arcs so far (including the Apokolips once followed by the trials) that we just have to take it at face value. It would be nice to have an interview with him on why he decided to follow this route with this particular character. Certainly, it works on the level of this being a “cartoony”, fun ride. The character of Petite Tina is an interesting one – again this isn’t personally my favorite style for a Harley story, but it is an effective and enjoyable read.

When it comes to the arc of the trials, I do question if this story could potentially be stringing itself a little long, especially now that we are back to a monthly schedule on the books. While this is a good issue, I can see this concept becoming a little tiresome, (given we are not even halfway through the entire story) no matter how cosmic and cartoony the action around Harley gets. At times the character feels like she is felt for bigger and better stories but this is still a comfortable, solid read for the fans. Humphries is delivering a consistently entertaining read on the Harley Quinn title.

Final Thoughts: A slightly clever and fun issue which plays with some neat if obvious themes. The Trials of Harley remains one of the better Sam Humphries Harley arcs.