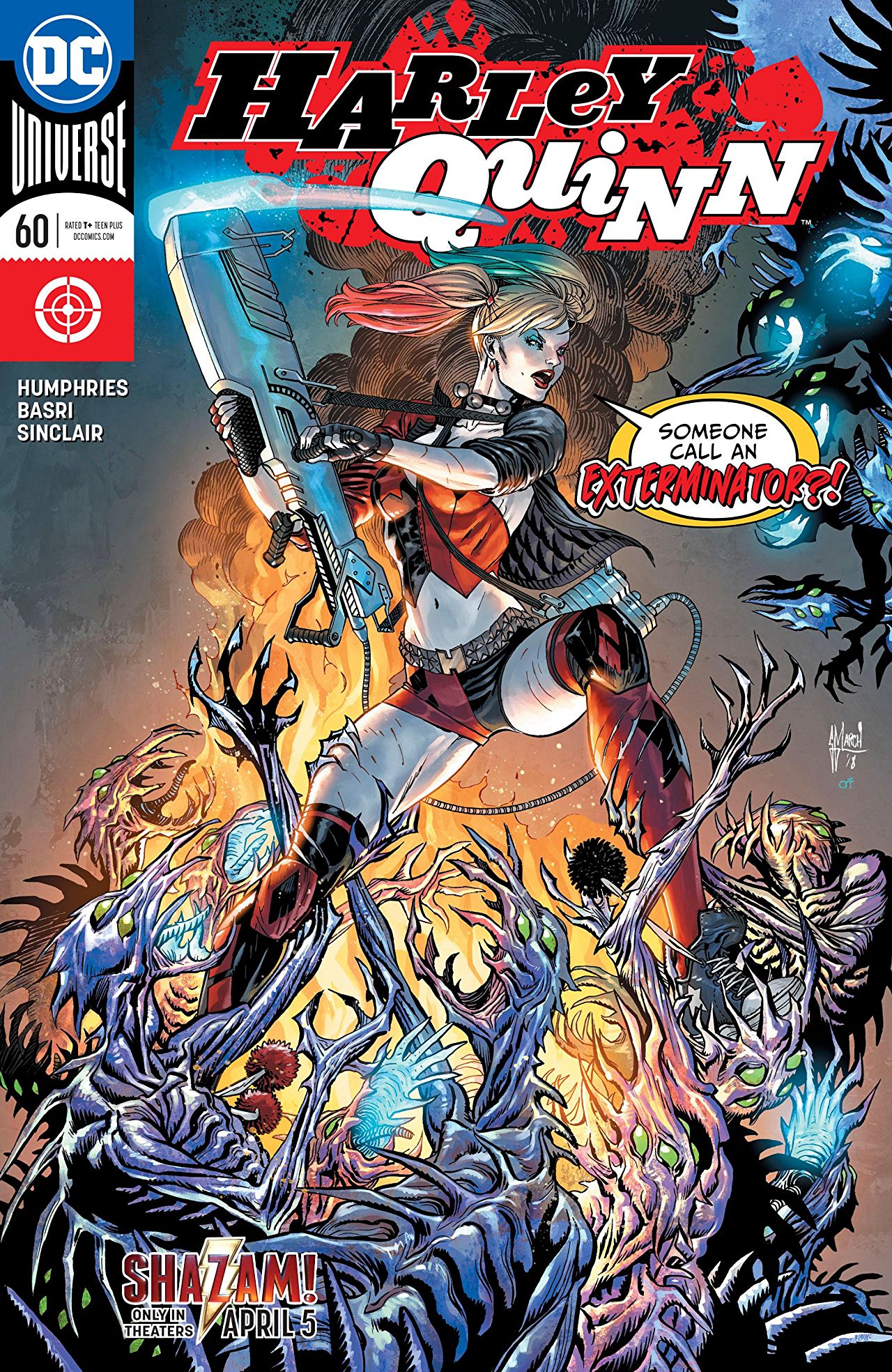 Overview: Harley finds herself in a death-match versus aliens and weird mirror images of her friends and foes!

Synopsis (spoilers ahead): At the beginning of this issue, Harley finds herself trapped and fighting a horde of what seem to be alien parasites. It’s quickly revealed that due to her mother’s illness Harley has broken into a research and development office tower, seeking an experimental cancer cure for her mother.

As she fights off the horde, Harley goes into a room where she meets what seems like a simulation or copy of the Joker, acting strangely and out of character. This follows with Batman, also speaking with a Brooklyn accent, and not really himself either.  From there Harley sees her mother, confused and scared, acting zombie-like.

Just as Harley starts to give up, Mirand’r turns up, once again urging Harley to go on, despite the severity and challenge of the trials. Harley guns up, reaches the control room, where she sees multiple versions of herself and then begins to understand the aliens she is fighting are lost travellers pulled across dimensions – she reverses the process and they are sent back home. She is left to ponder the violence of her actions in killing so many, when Mirand’r tells that she has completed a trial! Meanwhile, the Enchantress emerges in Gotham City.

Analysis: This is not a high watermark for Harley and is in fact below-average storytelling. By falling into the trap used by so many writers in both comics and TV, stretching this arc over a series of too many episodes is starting to make it feel very thin and lacking in substance. As Harley almost literally stumbles from one event to the next event, the scatter-shot plotting feels less like effortless slapstick and more like a poorly planned comedic misfire.

Where does it all go wrong? It’s not in the uniformly excellent art which gives us a fun, bubblegum high quality Harley appearance throughout and on several occasion lifts the book from the swamp of mediocre paint by numbers storytelling. The problem I think lies in Humphries way of using Harley – he’s fond of using her as comic relief in what could potentially be Morrison-level cosmic adventures but instead, are bad Looney Tunes episodes – as if the writers of Looney Tunes did not know how to write Looney Tunes and pay off the jokes.

What could be an emotionally affecting story involving Harley trying to save her mother from cancer and trying to get access to lifesaving drugs, becomes a clownish killing match against videogame style horde aliens – we understand the very obvious metaphor, that they are cancer cells, but that doesn’t make it good. It’s as if this book is scared of the very big topic of cancer that it introduced, and would rather dance around it, locked in the overly long trials, which are starting to feel just like that to loyal readers. In the opinion of this reviewer, the longer and further Harley has been taken into a “cosmic pratfall” realm, for want of a better term, the less emotionally impactful and frankly less funny, has this comic become. What should be impactful moments with Joker, Batman and her mother, become trite little see-thru jokes.

The one scene which for me is the most interesting of the entire comic is where Harley reaches the control room and see’s other aspects of herself – we see the Suicide Squad movie Harley, classic Harley in the red and black suit, a Dreamer Harley, and so on – it’s a beautiful moment in the book. By taking away the clutter of so much of the story the art starts to shine. It’s a fantastic page and could point to so much interesting story-telling. Sadly this is followed by some extremely redundant pages that make very little sense and feel like Sam Humphries had only half of a story.

It pains me to say this as Harley Quinn is one of my top five characters and I love her, but Sam Humphries is turning this book into a snore – it’s a shadow of what it was with Frank Tieri and Palmoitti and Conner before him. We need fresh blood. Harley does too. Make a move, DC.

Final Thoughts: Not a great issue of Harley Quinn, as Sam Humphries’ run is starting to feel decidedly average and lacking in anything special. For completionists only.