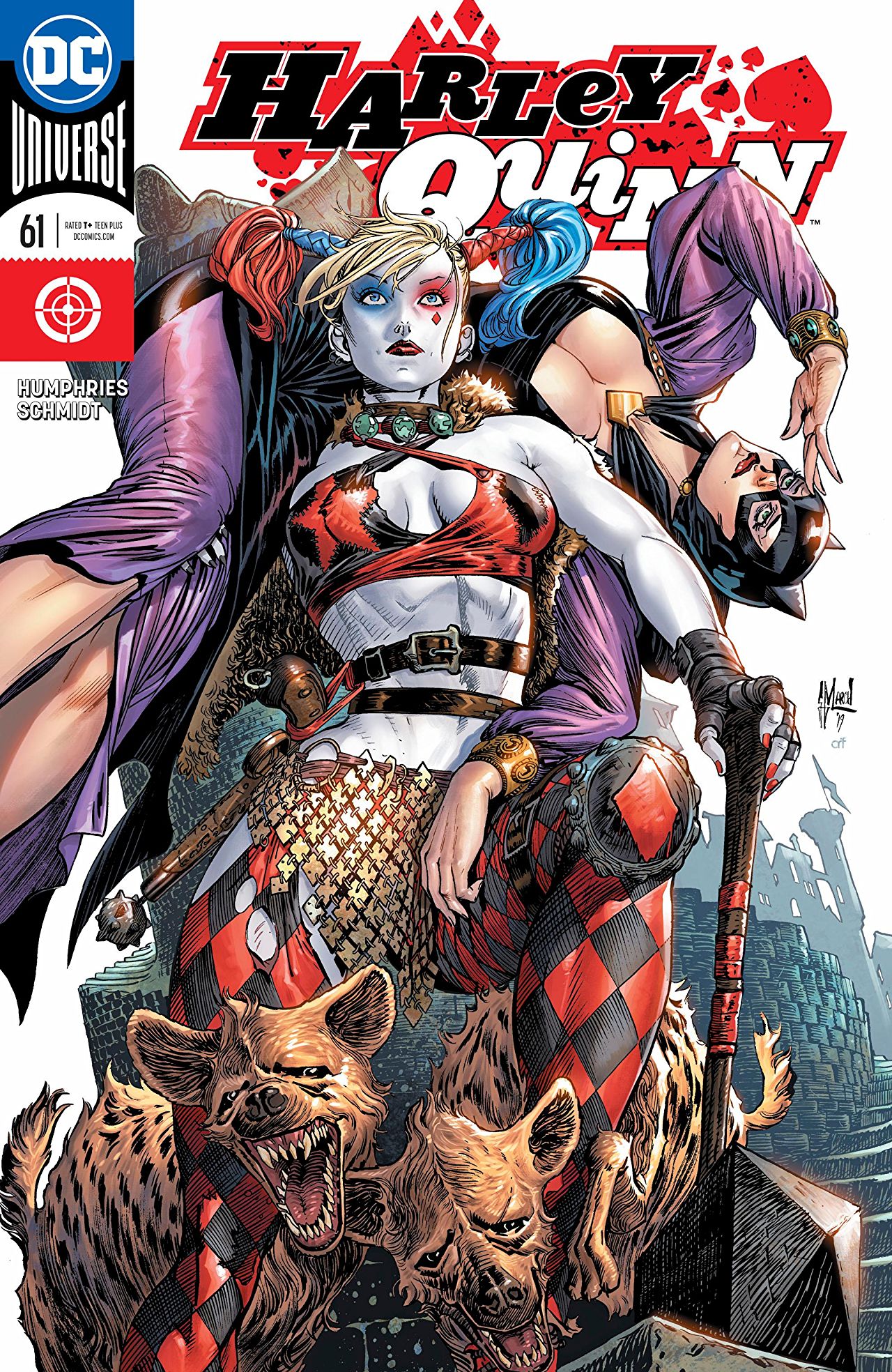 Overview: Harley is dragged into a mirror world through the machinations of the Enchantress, and a games night gone awry!

Synopsis (spoilers ahead): The action kicks off with a role-playing session where Harley, Petite Tina and a bored Selina Kyle aka Catwoman are playing a dice game that Harley was given by a red-eyed old lady in the night. Foreboding! At this point, the action shifts as Harley is merged into a wild dreamscape. She is sent to a land where Catwoman is an imprisoned queen, held hostage by Loque-Up, while a demonic Hugo Strange based in Arkham pays homage to the wicked Enchantress, who has bent the world to her savage will.

It appears from what Enchantress says that Harley the Heretic can endanger the spell which distorts reality, while a muted court jester could hold the secret to the unbinding of the spell. The Enchantress summons her Rogue Enforcers. These include Lord Edvard, Master of Riddles, who is actually loyal to Queen Selina’s cause.

Harley meanwhile has worked out that the Enchantress is behind this dream-scape and she was hoodwinked by the old lady. She tries to make Queen Selina and Edvard see that there is a real-world buying the Kingdom of Gotham, with dating apps and indoor plumbing, but she doesn’t get through to them.

Suddenly the Gotham Knights arrive, Knightwing, Anarchy the Druid, Silver St. Cloud, Harvey the Bullock, and Ace the Werewolf! Queen Selina seeks The Dark Knight but he has…gone. Without the Dragon she has lost, they cannot confront the Enchantress directly. Unfortunately, the Rogue Enforcers, which include Duece-Face, Josef Chil, Orcwald Cobblestone, The Creeper and Wynter Wizard, emerge and burst upon the gathering!

The battle begins and Harley comes upon Tina, and in the first moment Harley is overjoyed, but suddenly Tina reveals herself to be Tina the Executioner, and she says the Enchantress has ordered her execution! Stay tuned cool kids…

Analysis: Coming off a weak issue last month, I have to give credit to Humphries for making me care about his run again. The usage of the game to bring Harley into the mad netherworld of Arkham and Hugo Strange’s bizarre dimension, and then into the dark Kingdom of Gotham are dreamlike and quite wondrous. Humphries is clearly not going to be the writer to give us street-level Harley tales, but there is a certain power to these proceedings. I prefer these “vision issues” that mirror Harley’s mental state and relationships to the relatively lame issues and arcs previous which go for a “wacky cosmic” vibe that lack depth and power.

The art is an important factor in lifting this issue from what is still quite slight material. The dream-like style is aided by the cartoony, expressive artwork. The depiction of Selina as a jailed queen is interesting and effective – “this is no fable, but rather my reality.” Don’t forget Catwoman is essentially on the run from her past, her broken romance with Batman, which the beginning of this issue addresses. Her reality is in so ways a sad one. It’s a nice touch and has a subtlety in mood that I think so much of Humphries’s work lacks on this title.

It’s obvious that Humphries is having fun playing with the Catwoman/Bat-Family motifs and the mirror images of the characters are entertaining and fun. I was pleased to see this issue not wrap up in a “one and done” – for once in modern comics stretching this concept into another issue feels like a solid creative move. There is fun and excitement crackling in these pages – this is a return to form and fresh vision for the Harley Quinn title. I eagerly await the next issue!

Final Thoughts: A much-improved issue in the Sam Humphries Harley run which sparkles with power and personality. It’s as if Humphries is planting his flag and going for one of his strongest issues yet, just as we were beginning to lose faith. Let’s hope this continues.