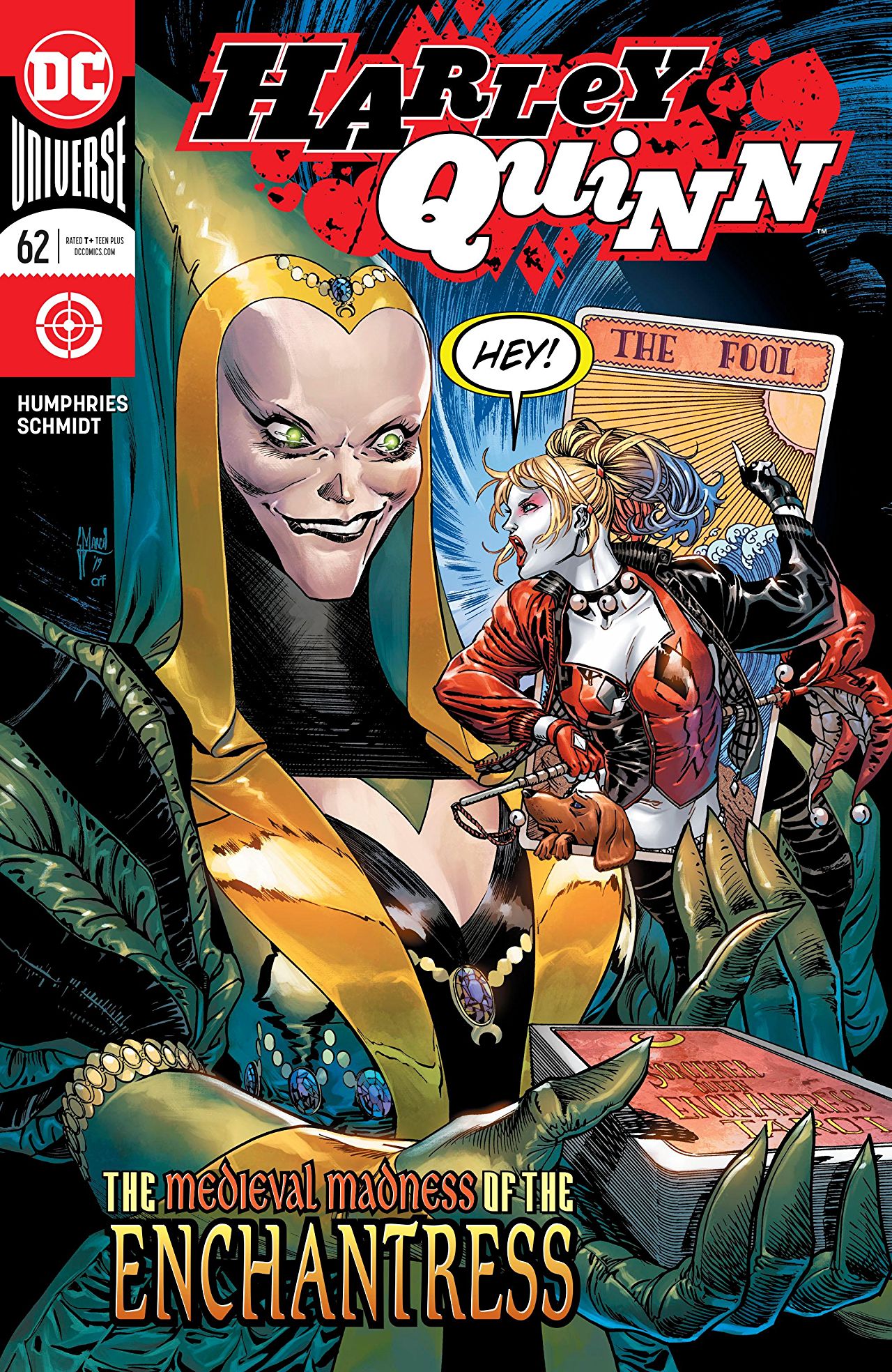 Overview: Harley helps Catwoman escape from the wicked Enchantress, with both of them lost deep in a dungeon dimension of a very twisted reality!

Synopsis (spoilers ahead): The action kicks off with Harley (aware she is trapped in a prison dungeon reality) tied up at the stake with Queen Selina, aka Catwoman! Selina, however, doesn’t realize she is lost in a false reality and begs Harley to be quiet if this to be their final hour! The Enchantress who is controlling this reality (which started in the last issue through Harley’s roleplaying game) enlists the help of a brain-washed Petite Tina to be the executioner of Harley and Queen Selina!

Just at the critical moment, quite literally with the fires burning around her, Harley manages to get through to Tina and remind her that she is a not an executioner, but a liberator; somebody who fought against the evil tyrannical rule of Granny Goddess! She screams, “Tina is slave to no master!” and frees Harley and Selina! Although they are free, this reality’s Master of Riddles quickly informs Queen Selina that the Enchantress has gone back to her castle with the Queen’s Gotham Knights!

Harley hatches a plan, which involves being smuggled into the castle by Tina, who says she has executed the two of them and has their headless bodies in a bag. Naturally, this is all a scam and one indeed that the Enchantress sees through quickly, where she unveils the Gotham Knights, now brainwashed golems called the Monster Men!

Tina rebels against the Enchantress and Harley manages to get through to Killer Croc (who was the Enchantress’s Dragon) and he focuses his aggression and menace forcing her to flee. Enchantress escapes, promising revenge, as Harley smashes apart the evil mirror. Reality itself has not changed back, however, as the others are still hailing Queen Selina. Harley reaches out to Selina, encouraging her to remember her real life – both the good and the bad and sad, such as her sorrow over the broken engagement with Batman.

Harley’s old friend, Jonni DC, the continuity cop, then appears and blends reality back to where it should have been, with a Line Wide Retcon, invoking the name of former DC Comics’ editors and writers! Jonni also comments they should have invited her to the game night that kicked all this off, as she is the best game master of all time!

On the way back to NYC, Harley finds out she has passed another of the Trials and it also marks the first trial she hasn’t tried to back out of! Back in the city Harley visits her mother and is clowning around with her when a doctor comes to tell them the sad news that the test results are back and cancer has spread to her mother’s lymph nodes. It’s time to start preparing for the worst.

Analysis: Once again this is a strangely up and down issue. A strong concept (that of Harley and Selina being sucked into a fantasy world) is given a threadbare storyline to hang it upon and this book can only be thought of as wafer thin at this point. In some ways, Humphries gets the basic mad-cap personality of Harley, but not much else. It feels as if DC is not really content to ground Harley with a “Crime Storyline” or even a kind of “Girls Night Out Feel” seen previously in Gotham City Sirens, but rather it is just one long thin cosmic take on the character. For me personally as a reader it mostly leaves me only slightly amused. The tone is so over the top that it fails to convince me as a Harley fan – I start wishing the storyline was about Catwoman and Harley in the “real world”, not just some escapist thrill ride. The in-story meta nods are cool, just like Jonni DC, but again, it feels a little empty, as a clever in-joke wasted on average material.

The art is not particularly strong outside of the two scenes which call for a very surreal style which to my mind, catches the attention much more than the almost rushed cartoony style seen elsewhere.

I hesitate to be more critical as the work is more than passable and it is an example of a writer following his vision, which I do appreciate. But this Harley fan is starting to crave something quite different.

Final Thoughts: A somewhat thin story is helped across the line by some engaging sequences – could, and probably should be better, but still an enjoyable enough romp for the Harley completist.