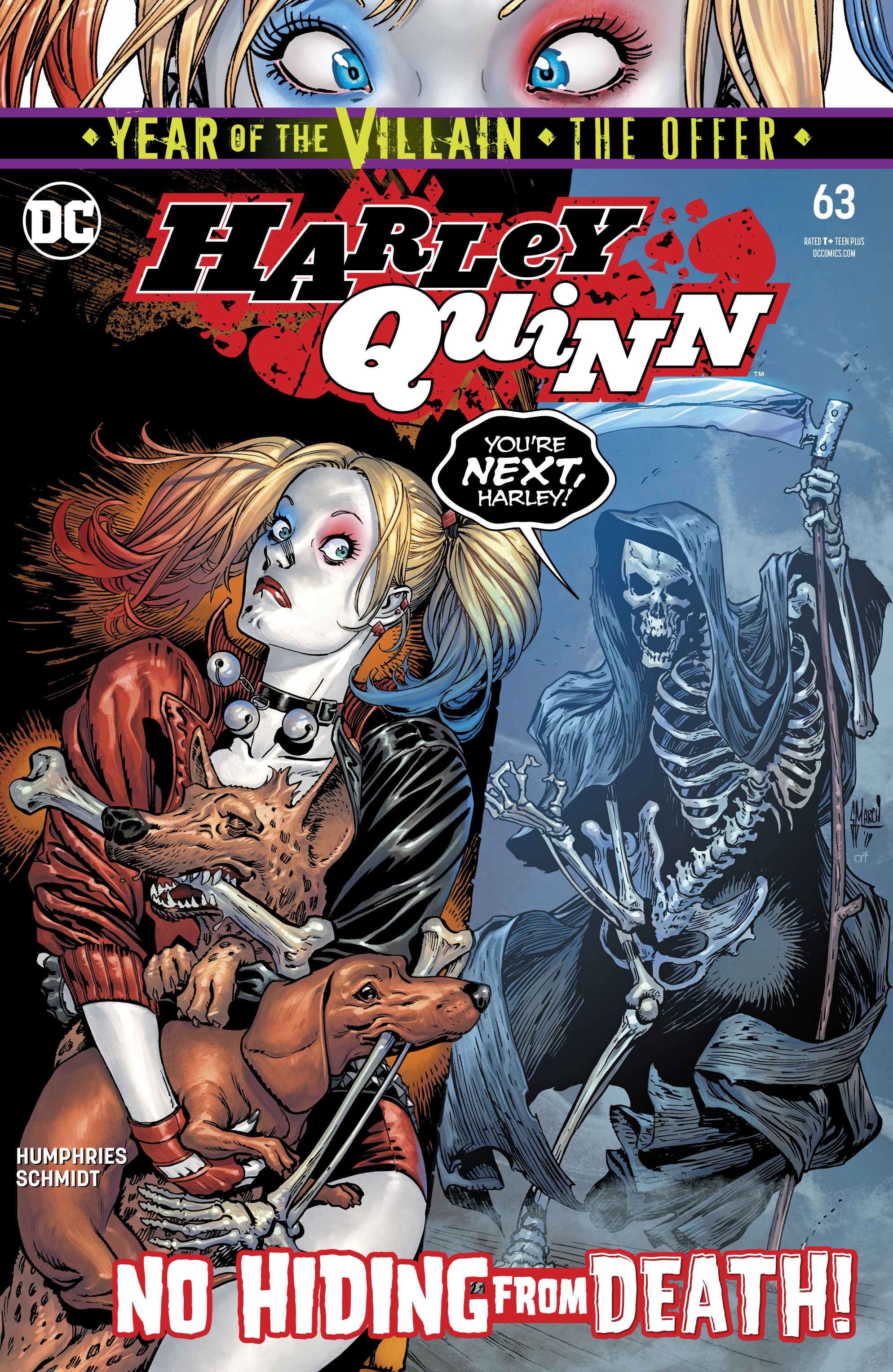 Overview: Harley confronts the specter of Death itself, in another bizarre trial, while Harley’s mother gets more bad news.

Synopsis (spoilers ahead): Death is stalking Coney Island. Harley stays at the hospital with her cancer-ridden mother, as the doctor gives them the bad news that cancer has spread throughout her bones. Her mother is remaining upbeat however, still able to laugh at the absurdity of death, but Harley is seriously feeling the impending loss, as she walks forlornly around Coney Island.

She frequents a Kord video store she used to frequent, that is now closed. As she goes in and walks around the cluttered shelves, Death stalks the store! Harley is stunned suddenly when she is in the anime section and sees all the phantoms of her childhood anime idols! The idols say they are going to the next stage of development, and Harley confronts Death, who advises her that she is deceased!

Harley starts laughing and giggling and Death suddenly realizes that it was the video chain and the store that has died – not Harley! He apologizes saying he is tired and burnt out from all the work. Harley has now passed the next trial, and she only has one to go. Meanwhile, her friendly alien friend who is observing the trials worries that the last trial will break Harley.

Harley goes back to her mother in the hospital who is in an induced coma, and she starts reading her a copy of a Harley comic written by her friend Meredith Clutterbuck. It happens to be a tie-in to the Year of the Villain event!

Analysis: The good news is that this is a much improved issue from Sam Humphries which has struggled under the thinness of a cosmic storyline that hasn’t served Harley or her supporting characters very well. By focusing in on the close relationship Harley has with her mother and then broadening it out into the confrontation with the literal specter of Death, this issue has an emotional hit to it and succeeds where so many issues of recent times have fallen flat. Although I remain critical of the entire cosmic for a character such as Harley, there is no doubt this is an effective issue – watching Harley walk alone through Coney Island, a ghost amongst the crowd, highlighted a tone and ambition of content and style that has been severely lacking in the title. I will be frank – Sam Humphries on this title has been quite lackluster, but he serves up a good issue here.

He’s helped by an immensely gifted artist in Otto Schmidt who is not afraid to inject a little bit of experimentation and flair into what could otherwise be a very generic looking issue. A six-panel page showcasing Harley holding her purple teddy bear, upset and inward-looking, showing her manic distorted hyper-emotional personality very well. It is as effective at conveying her inner self as a thousand words could ever be.

Having Harley in a video store (a Kord store no less, a nice Easter Egg reference to Ted Kord aka the Blue Beetle) reliving her childhood memories and experiencing the phantom ghosts of her anime influences is a cool touch and once again, I found myself wishing there was a bit more meat on “the story bones.” It’s Harley’s nature to jump from one idea and concept to another, but there is some good material to be mined. Perhaps a better-structured storyteller could exploit this at a later point.

All in all, this is an improvement of this series’ run which has been, to be frank, uneven. Let’s hope that this upward trajectory continues and it would a wise move for DC to continue pairing up Otto Schmidt with Humphries as it seems to be evaluating the book overall.

Final Thoughts: A solid issue that delivers on an emotional beat, this is an improvement on the Harley Quinn title which is trending in the right direction.