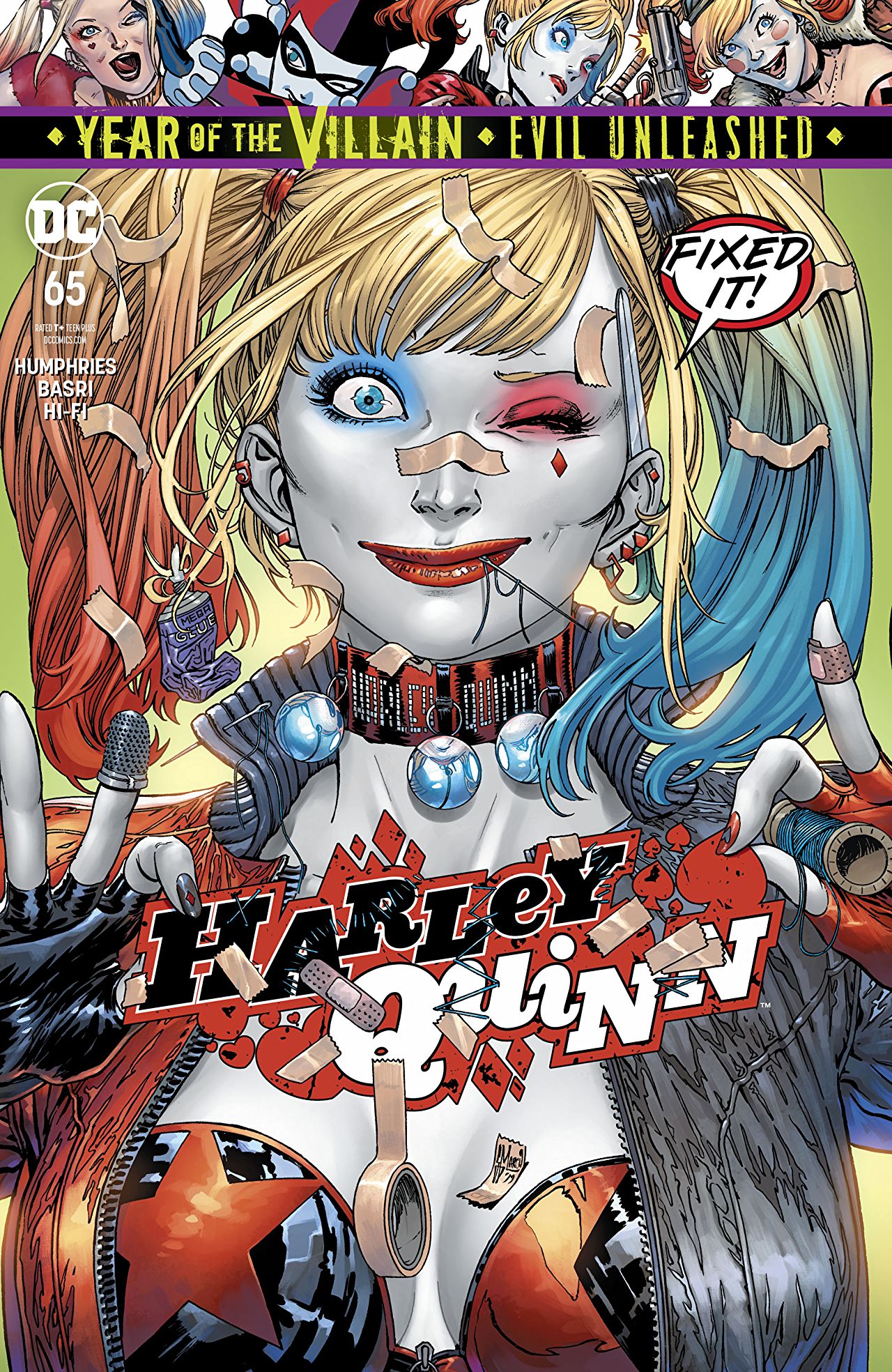 Overview: Harley escapes to a volcano jungle in an attempt to run away from the grief of her mother’s death, with only one test in her trials left to pass!

Synopsis (spoilers ahead): A reflective Harley is overlooking the ocean at Coney Island from the pier, having a drink and thinking about her mom who has passed away from cancer. She is having visions of her mother, but she knows they aren’t real. She sees an apparent shooting star land in the volcano that has appeared in the ocean and she decides, to hell with it, and jumps into the water, headed for the volcano!

The action cuts to the Coney Island volcano when a little bit of time has passed, and Harley is now a string bikini-clad castaway, with a spear, challenging Mirand’r, who has come to the volcano in an effort to get Harley back to her friends, who are missing her.

But Harley is in no mood to go back anywhere, she is the Castaway Pirate Queen, hunting Ginger Spice! But gradually some sense is talked into her, and she goes to read a comic Miranda Clutterbuck has written – she says it’s the next issue in the series. Harley reads it, and it shows Harley spending time with her sick mom, with Harley dressed in her traditional costume, when the Apex Luthor who comes again with his proposal for Harley to join his Year of the Villian – Harley’s mother shouts at him to go away and stop bothering Harley, which brings the Pirate Queen Harley almost to tears. But quickly she throws the comic away and loses her temper at Mirand’r when the trials are mentioned again. She throws the belt away but Mirand’r gets her interest again when she announces why she is intangible – she is dead!

Mirand’r then tells the story of back on the planet Tamaran she was killed by an angry, wounded warrior seeking vengeance on her mother, who was a priestess to the god X’Hal. Her mother then begs for Mirand’r to be brought back to life. The Lords of Chaos and Order agree, but for the sake of balance, the deal is that Mirand’r is basically intangible, and to get her full life back and be able to feel the breeze and such things, she must complete her service to the lords, guiding candidates through the trials.

Harley eventually decides to leave the life of a Castaway Pirate Queen behind and knows she is hiding away from her feelings of grief. She announces she will come back to her friends and home at Coney Island. Suddenly the belt DINGS and it’s announced that Harley has passed the trials, and she is to be transformed into the Angel of Retribution, as she appears before the Lords of Chaos and Order!

Analysis: This was an interesting and heartfelt issue that both dealt with Harley’s feeling of loss and grief over the death of her mother, and also brought some neat backstory from Mirand’r which fills that character out a little more. The thinness of both concept and execution that has characterized much of Humphries run is fleshed out a little more in this issue – I thought the aspect of Harley as the Pirate Castaway Queen was well done and felt believable inside the absurdist drama that is the tone of this Harley run.

The art, in particular, has a soft dreaminess in this issue, with wonderful coloring and a feeling of peace and thoughtfulness across the issue. This isn’t always (or even often) the tone for a Harley book, but it fits well here.

I’ve been critical at times of the direction Humphries has taken with the Harley character, and partly this relates to the spine of his tale, focusing on the cosmic trials, which to me is far less interesting than many of the directions the Harley Quinn character can (and has been) taken. With that said, the last two issues have been a marked improvement and I would say that at least there is an upward trend. The strong, distinctive artwork also greatly added to this book’s mood. It feels like it keeps improving.

Final Thoughts: A strong issue with excellent art and a strong emotional core – the best issue of Harley Quinn in some time.