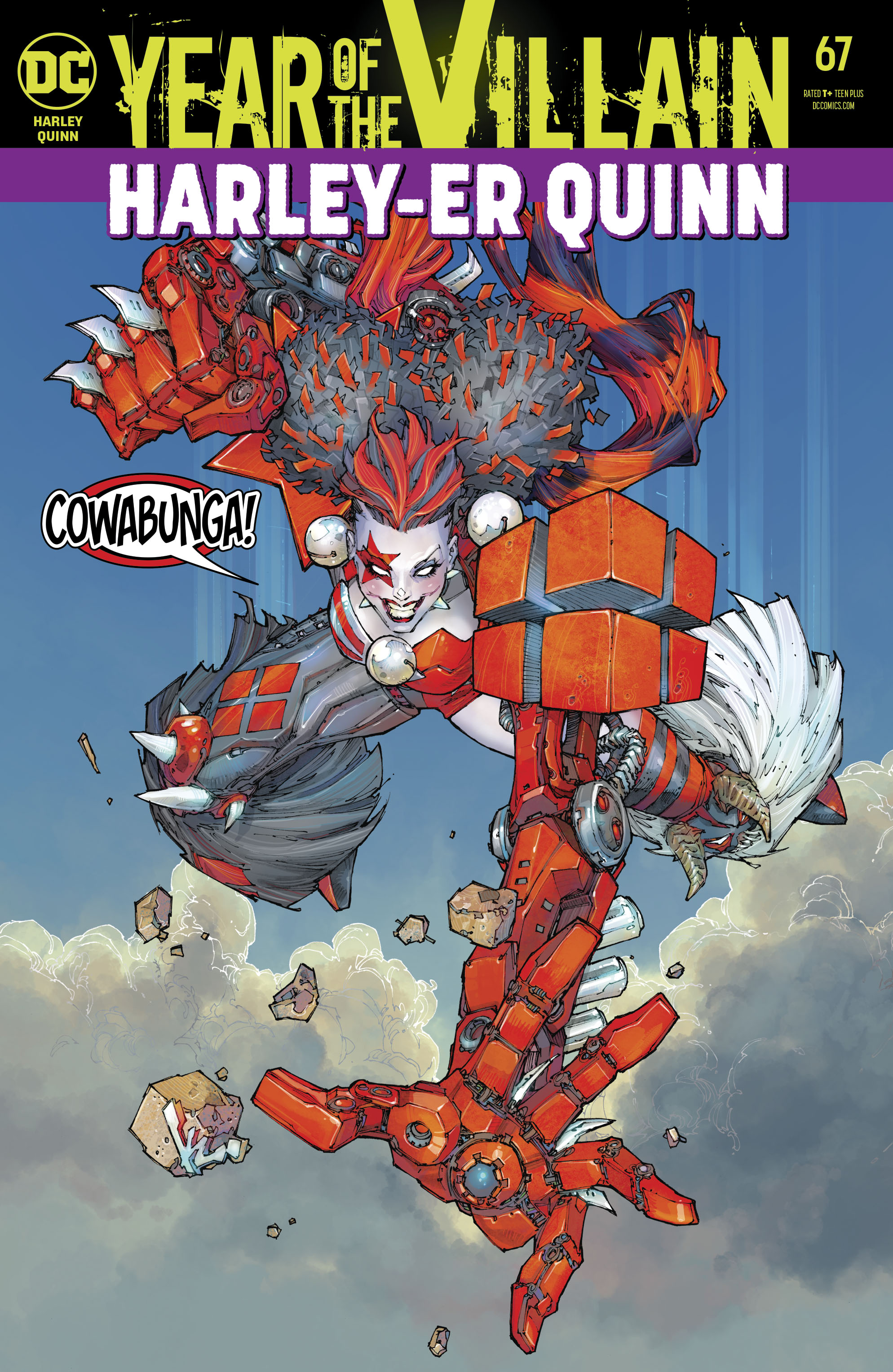 Overview:  Harley tries to gather her family for Thanksgiving, while she and Booster Gold crash scenes from the history of past DC Universe crises.

Synopsis (spoilers ahead): Harley, fresh off her mother passing away, turns up at her father’s house, trying to organize a Thanksgiving dinner as is the family tradition, but her Dad isn’t in the mood, and the house is dirty and in disarray. Meanwhile, Harley, dressed in her original costume, and Booster Gold, are spiralling backwards through time in a comic book and come face to face with the events of multiples crises, starting with Final Crisis, then going to Infinite Crisis lead up issues, and ending up at the original Crisis on Infinite Earths! Harley confronts the heroes who played a main role in the company crossover events, while at the same decrying them as shameless corporate money-grabs, forcing readers to buy into multiple issues of side-titles, if they wanted to stay abreast of the event. Booster Gold meanwhile has a code-word arranged with himself, as he is from the future in the regular DC Universe.

Harley meanwhile is spilling the beans on the events of each crisis, from Batman dying at Darkseid’s hands, when he destroys Batman with his Omega Beams and imprisons Earth with the Anti-Life Equation, to confronting Alexander Luthor who tries to buy Harley’s assistance, if she will help them escape from the pocket universe of Infinite Crisis.

Meanwhile, in the regular continuity Harley is going to each of her siblings trying to get them interested in joining up for Thanksgiving dinner, but one by one they reject her. Ezzie is literally throwing rocks at windows and isn’t in the mood to listen. Barry has made his dead mother a legend of his death metal band and tattooed a huge picture of his mom on his back. Frankie is losing himself in the world of robots and tells Harley that she is not his mom and she can’t force them to stay together!

In the comic book written by Harley’s friend Meredith Clatterback, Harley goes all the way to the Crisis on Infinite Earths but learns there is a point to crossovers overall. She helps to save the universe and the Justice League joins her for a big Thanksgiving dinner. Meanwhile, in the regular DC Universe, nobody shows up to the diner for the family Thanksgiving dinner, and in a funk she hijacks a bus going west, remarking she will have a merry little Christmas even if it kills her.

Analysis: This issue contains a pattern of recent medium to strong issues of Harley Quinn under Sam Humphries stewardship, while still falling short of it’s potential as a concept. The concept of Harley and Booster Gold crashing through the different DC Universe crisis events are done well, but could have been so much more somehow – the plays feels safe if not entirely predictable. And when dealing with the regular DC Universe Harley and her family, Humphries seems on less firm footing, as any emotional punch feels lacking as once again he feels more comfortable in the cosmic sphere. The winking relationship between the two Boosters, in just a couple of panels, feels so much better of a comic than the multiple pages of Harley trying to get the family to attend Thanksgiving. By jettisoning Harley’s support cast, Humphries really does make the character of Harley feel empty, not just as a mood, but as a character in herself. It’s not great writing in those scenes.

And yet, the crisis scenes, giddy with excitement, are bursting with energy. It’s a curiously compromised issue, seemingly aware of what it wants to achieve and yet let done by lackluster pacing in the domestic drama of Harley’s life. Supported by very capable art this is still a good comic but I wonder if committing more completely to the gag of the comic within the comic might have yielded even better results. I will be interested in the wider critical opinion of this run when it is finished.

Final Thoughts: A good, clever issue which could push further than it does. Playing it a trifle safe, but still comfortably above average.