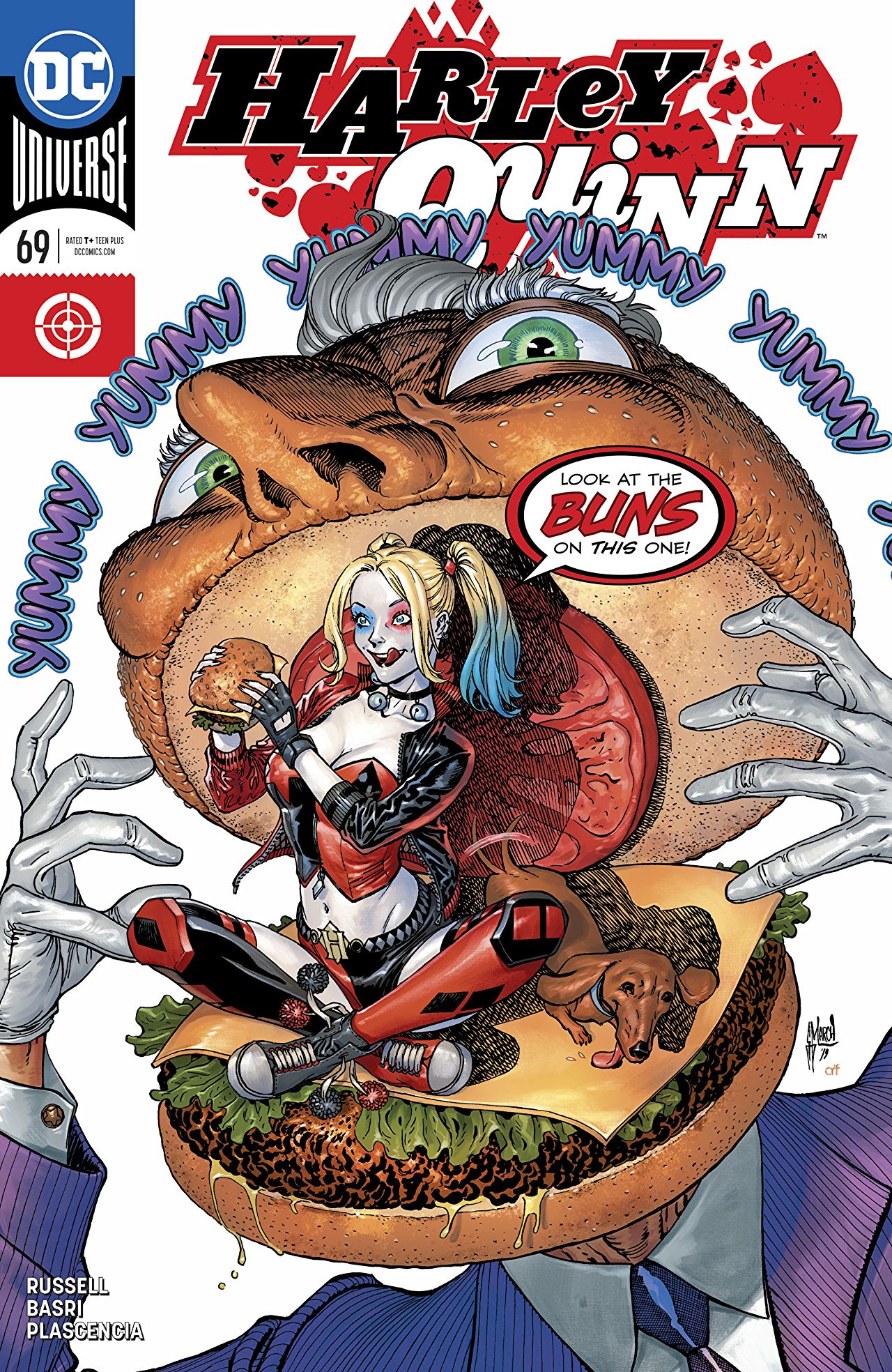 Synopsis (spoilers ahead): In Sing Sing Prison, the Hambezzler is released after a thirty-year incarceration. Incarcerated for stealing millions from his employees, he wonders where to go now and is given Harley Quinn’s card.

On Coney Island, Tina the Apokalyptan warrior struggles to help Harley fill out her taxes. Hambezzler shows up, claiming he was wrongfully convicted and offers to do the taxes… which seems like a bad idea, given his history.

On Long Island, two of Hambezzler’s former employees, Grumpus and Clown McCrown discuss their plans for revenge on their ex-boss. They show up outside Harley’s window the next morning, along with Captain Playhab. Harley beats them up, but they appeal to her sense of justice.

At a nearby Delaware Fried Chicken, they lay out their grievances. Hambezzler claims he was framed by his bosses. McCrown tells his own story of being fired by those same bosses, Mitch and Murray, as does Grumpus. Harley figures out their nemesis must be another former employee, the hamburger-headed Councilman Cheeseburger. However, when confronted, the Councilman claims Mitch and Murray strong-armed him as well. Finding a McLegion of McDoom lair of evil where the bosses are hiding, Harley and the disgruntled mascots burst in on more corporate evildoing. They beat up Murray, and after Harley gives McCrown her own backstory and motivation for helping them, McCrown drops Mitch into a vat of toxic soda pop, causing him to retire to hide his disfigurement.

Analysis: Guest writer Mark Russell gives regular writer Sam Humphries a break this month, giving us an issue spoofing corporate greed and McDonald’s, along with series artist Sami Basri. Though the kinds of clever jokes and parodies of easily recognizable properties have been a mainstay of Harley’s series for a long time, particularly in Humphries’ run, Russell attempts to continue his normal “shtick” of pointing his humor at his preferred targets, in this case, the corporate establishment. Though there’s plenty of real-life stories which back up Russell’s targets as legitimate, for someone who isn’t a fan of Russell’s, it feels more than a little like he’s an extremely one-trick pony. Though his weaving of Harley’s backstory, the Joker/clown parallels, and other small elements do show genuine wit, the dispiriting ending (though attempting to be heartwarming) doesn’t make up for the sense of retread.

Guillem March’s regular cover, though it doesn’t reflect the story inside literally, is clever, funny, and definitely a spiritual analog to what happens to Harley and her friends. Frank Cho’s variant is gorgeous and classy, but also contains sly humor that celebrates the new year.

Final Thoughts: A story with some fun ideas but ultimately lacking quite enough ketchup to make it memorable.