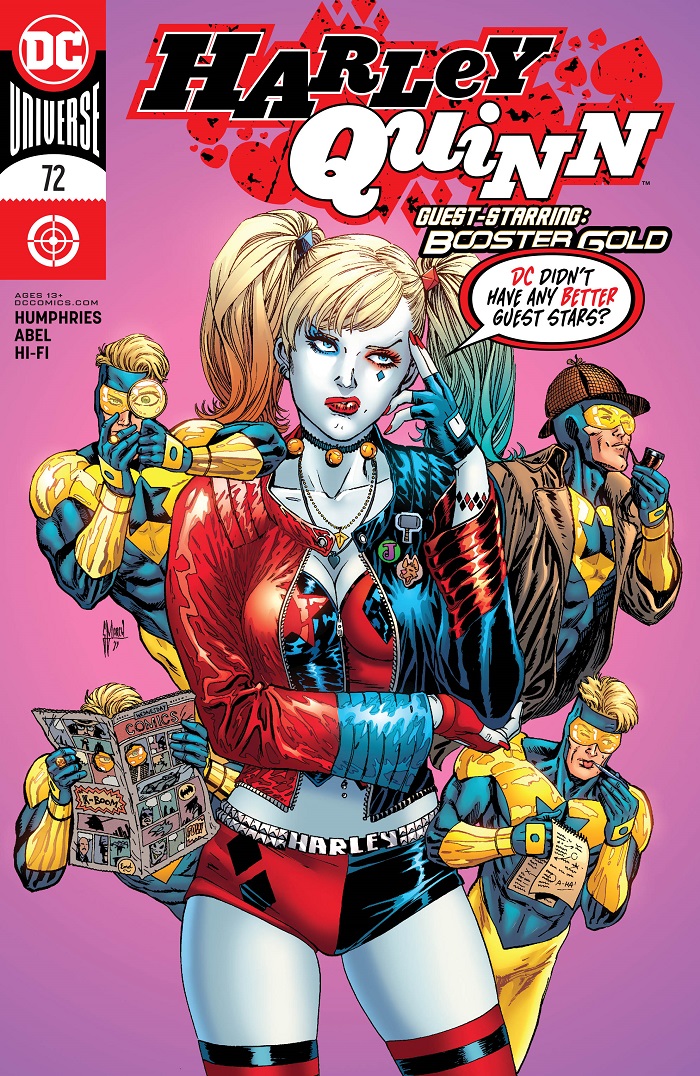 Overview: Harley’s investigation of Alicia’s murder grows larger and larger as she receives aid from the unexpected Booster Gold!

Synopsis (spoilers ahead): Earlier, Harley recruited Booster Gold to help her find evidence of her wrestler friend Alicia’s killer, ending the planning session by pushing them both off a roof to cure him of his fear of death.

Now, Harley finds herself at the hands of the evil Baby Face’s super-powered wrestling henchmen after accusing Baby Face of murdering Alicia. Booster flies in, punches the thugs off her, and flies Harley and himself out through the roof.

In Alicia and Harley’s kitchen, Harley tries to convince Alicia’s daughter that her plan to find Alicia’s killer will work, but the daughter only sees it getting worse and storms out. Booster walks in, and despite his worries about Harley’s approach to the crime (ignore evidence!), tags along because he worries about her.

At Gordita Beach, Harley and Booster pose as an engaged celebrity couple. They investigate a cult of extremely rich people and discover that the cult of grieving and wealthy people, the Nazis from the last issue, Baby Face, and the mysterious social media farmer/mega-businessman Jonathan Wittleson all seem to be involved in the murder…though Harley arrives at that conclusion entirely free from anything admissible in court. Booster can’t watch Harley continue to self destruct, and leaves, to which Harley discovers confusing feelings, but promptly moves on to threatening Wittleson at his pool. The villain, however, has been waiting for Harley – it’s a trap!

Analysis: After so long, it’s very nice to get back to reviewing current comics! And Sam Humphries’ Harley Quinn series continues just as enjoyably as it left off with “California or Death, Chapter 3: The Gold Coast.” Harley and Booster’s relationship is really fun  – seeing them trying to top each other with wild and wacky engagement stories while infiltrating the cult was a nice change from the typical straight man/comedian dynamic. Though I have no doubt that Harley and Booster’s possible crush on each other won’t go anywhere (this is a semi-out-of-continuity series, after all), they bounce off of each other really well. The mystery is quite nicely moved along, though I’m very curious if Humphries will pull the same resolution to the cliffhanger that he did in this issue, with Booster coming to Harley’s rescue again. It wouldn’t be surprising, as Booster’s heroism and feelings for Harley are well done here, but it would also feel a bit repetitive. Hopefully, Humphries has something else up his sleeve.

Art by guest artist ABEL, whose style does fit well with current series artist Sami Basri – clean lines, very appealing – but doesn’t quite have the sharpness and polish that Basri brings to the zany fun world of Harley Quinn. Guillem March’s main cover of Harley being annoyed by Booster is very funny and does hint at the interior, as well as being perfectly matching in tone – zany and appealing. Frank Cho’s variant cover is Easter-themed, matching the original release date, now months out of date, but still quite enjoyable, with the typical levels of detail that Cho puts into his covers.

Final Thoughts: Despite a slight downgrade in art, Harley’s neon-noir adventure in LA continues to be a very enjoyable romp!