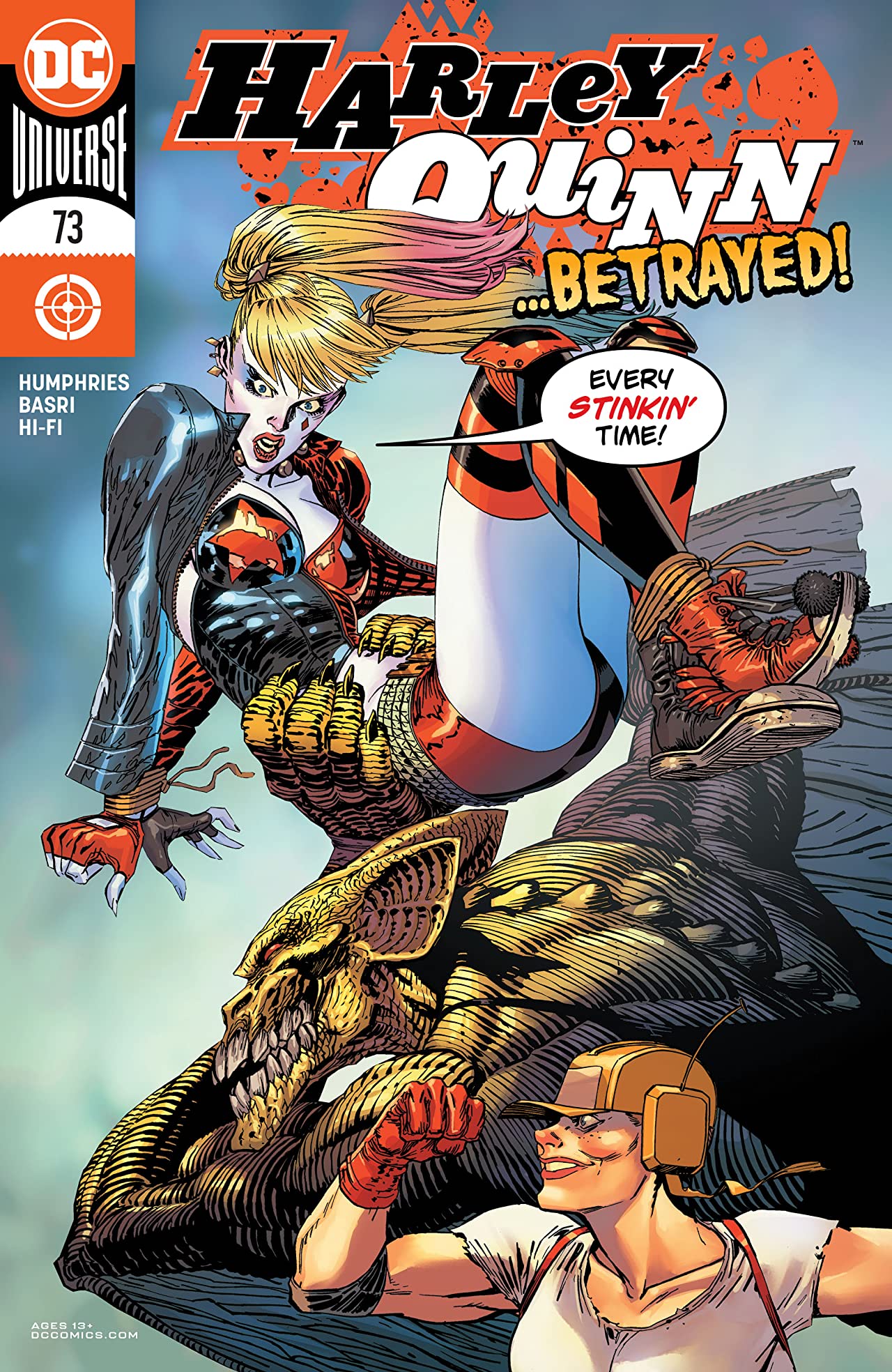 Synopsis (spoilers ahead): Though Harley faced a huge group of Jonathan Wittleson’s thugs in the cliffhanger ending of the last issue, we open on her having beaten them all severely, standing over Wittleson, and demanding the truth. He claims that Harley’s friend Alicia wasn’t murdered and invites her into his mansion. Revealing that he was originally Johnny Witts, a Gotham villain, he moved to LA to avoid Batman and go into white-collar crime. Handing her a suicide note from Alicia, Wittleson destroys Harley’s theories, leaving her to face Becca, Alicia’s daughter, and her own conscience.

Harley seeks out Booster Gold, who is coaching some kids at a school nearby, and realizes that he might be catching feelings for her, which causes her to run in panic.

At the bottom of the barrel, Harley seeks out internet psychic Charity Xo, who gives her some clarity in the chaos of her life and starts to see a pattern of something dark causing chaos and despair.

Harley then appears in the wrestling ring again, having made up with Baby Face and Wittleson, facing off against Shepherd the Ubermensch, the racist thug she faced off against earlier this arc. At first, mirroring the start of the arc, it seems like Harley is letting herself get truly injured to distract her from her pain…but then she notices that Sheperd has Alicia’s Jade Feather and brutally beats him until he confesses to his murder of her friend. It’s revealed that Granny Goodness is behind it all!

Analysis: Sam Humphries is wrapping up his run on Harley Quinn. After a couple of really delightful years of balancing hilarious and silly meta-commentary on comics in a Deadpool-like fourth-wall-breaking style with serious family drama and taking Harley through losing her mother, his final arc has been a fitting payoff for that balance. Thankfully, Sami Basri’s back on art after last month’s fill-in issue, and Harley, Booster, the villains, and the many other colorful characters inhabiting this madcap version of the DC Universe continue to look fantastic, with the bright and dramatic colors of Hi-Fi enhancing Basri’s delicate and appealing linework.

Though Harley easily defeating Johnny Witts’s goons is a bit of a cop-out after the last issue, it did make for a nice opening, and the rest of the issue is quite a roller coaster ride of emotions. I expect at least one more major twist in the next two issues before Humphries takes a bow. The reveal of Granny Goodness, I believe, will tie this arc to the first arc where Harley went to Apokolips. I like how whereas that first arc was a lot more madcap, this one has included a lot more real pain and emotional confusion. Humphries is definitely a writer to watch after the balancing act he’s pulled here, with Dial H for Hero, and his work on the Green Lanterns title.

Guillem March’s main cover is puzzling – it doesn’t seem to connect to the interior and features Harley tied on a gargoyle with an unknown character marching below her. Frank Cho’s main cover actually seems to have more to do with the interior, with a bandaged Harley with a wrestling belt over her shoulder, and a luchador-style mask behind her, reflecting the ending of this comic.

Final Thoughts: Just like Batman, Harley learns that when you fall, you have to pick yourself up again – but sometimes you have to get knocked really far down.