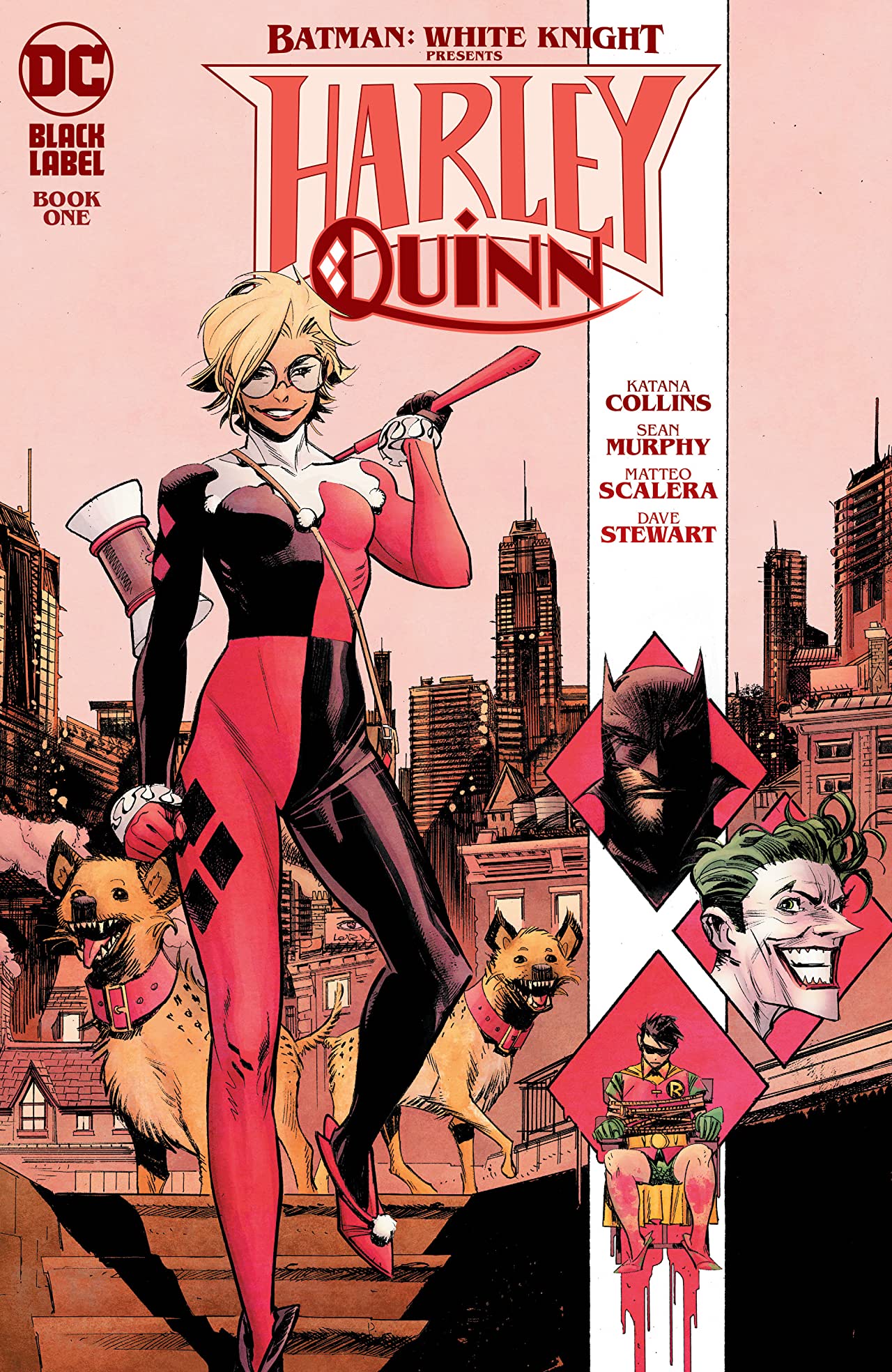 Overview: Struggling to balance her life as a single mother, Harley Quinn is pulled into the dark world of murder that she left two years ago.

Synopsis (spoilers ahead): Harley Quinn reflects on her life after meeting Jack Napier, the Joker – she met him as an exotic dancer in a club paying for school. Jack is immediately smitten, threatening people who treat Harley poorly, but their meet-cute-in-crime is cut short by Batman crashing the club. Jack vanishes, and Batman warns the young Harley to beware of Napier.

Years later, twenty-four months after the events of Curse of the White Knight, Harley puts her twins to bed after telling them this tale. Duke Thomas arrives with food and friendly company, at the request of Bruce. Duke tells Harley about the new serial killer in town, the first major crime since Batman unmasked and went to prison. Harley refuses Duke’s request to help the GCPD track down the killer.

Visiting Bruce in prison, Harley reveals her difficulties as a mother who struggles with wanting to be a mother. Bruce convinces her that she’s strong enough to chase this killer, and she leaves after drawing a heart on the conversation window.

At the latest crime scene of the “Golden Age” killer, Harley meets Duke and FBI Agent Hector Quimby. She has a violent flashback to Joker’s kidnapping and torture of Jason Todd and notices that the killing is a Joker copycat. Harley decides to suit up to face Neo-Joker.

Analysis: The Batman: White Knight universe has from the beginning thrived largely because of Sean Gordon Murphy’s brilliant artwork. With Murphy stepping back to produce this spinoff series in his universe, my own worry was first and foremost the artwork. I needn’t have been too anxious! Matteo Scalera does a phenomenal job of producing work that fits beautifully with Sean Murphy’s angular, distinctive style, while also being strongly his own production, similar to Andy Kubert’s feat on Dark Knight: Master Race continuing in Frank Miller’s artistic footsteps.

While Scalera doesn’t have the same compositional/narrative flair that Murphy provides, it feels very much of a piece with the Murphyverse, and writer Katana Collins (romance novelist and Murphy’s wife) does an incredible job fleshing out one of Murphy’s strongest achievements, Harley Quinn of the White Knight universe. Though Collins and Scalera worked together on a beautifully detailed and well written Harley Quinn: Black and White and Red digital-first issue that functions as a prequel to this miniseries, their full-color collaboration is a fitting continuation of Murphy’s high-octane alternate universe saga. Though the action is much lower scale, the emotional through-line with Harley, Bruce, Duke, and the rest of the White Knight cast promises the same kind of enjoyably alternate universe takes on Gotham’s finest characters.

Murphy provides the main cover, showing a strong Harley dressed in a pinkish suit, the playing card theme strongly evoked in composition, and the mostly two-tone coloring. Series artist Matteo Scalera gives a much warmer cover of Harley and her twins, throwing a lot of striking design elements like the Bat-signal, Joker and Harley dancing, and the crime scene photos.