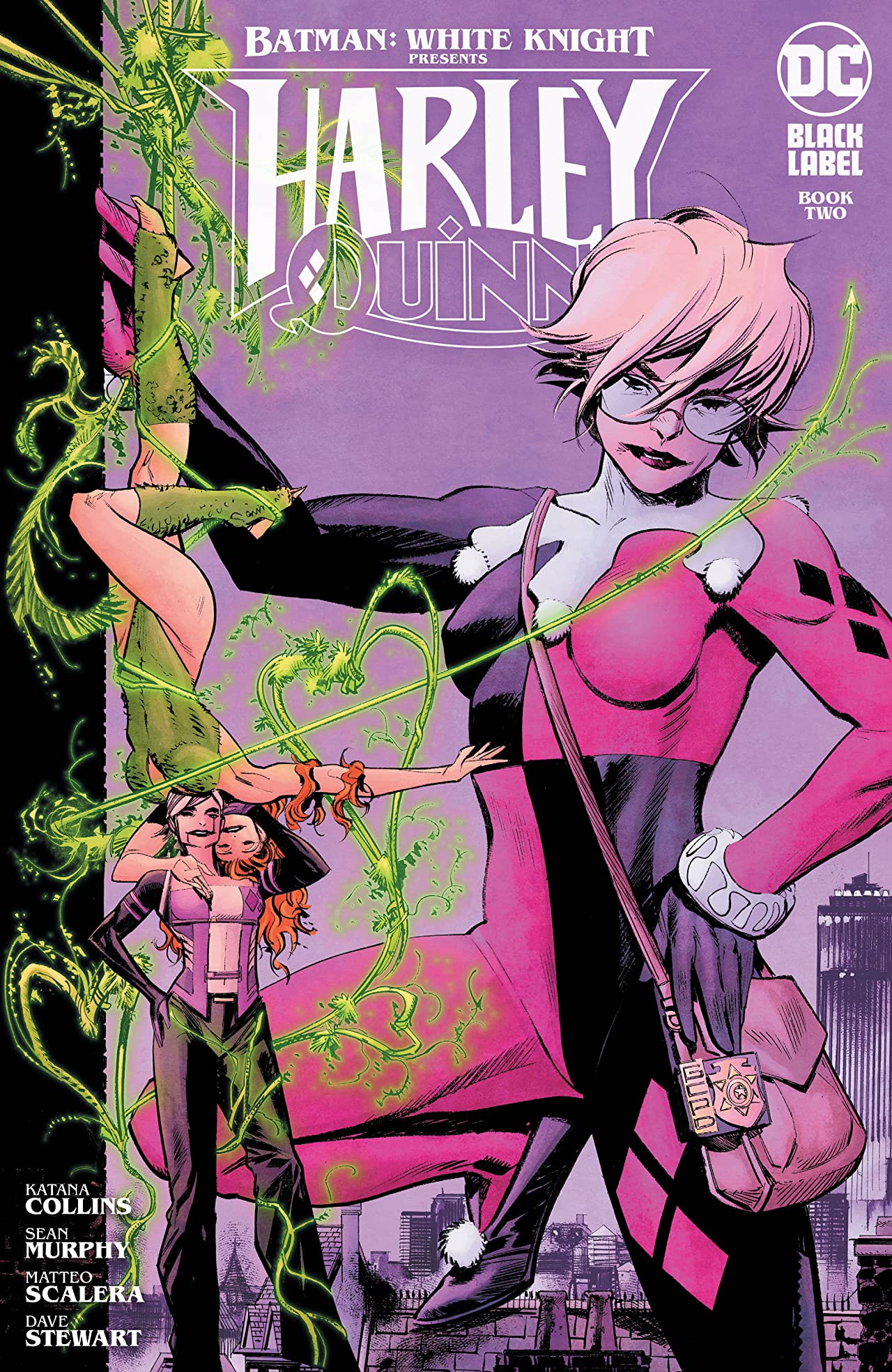 Overview: Harley faces Neo-Joker in a brutal facedown that yields an unexpected lead in the case.

Later, she meets with Montoya at the playground as her twins play with her hyenas, passes on the information, receives a lecture from Commissioner Renee about working WITH the GTO, and gets pushed to work with Agent Quimby of the FBI. She tells Quimby about her relationship with Jack, how she published her work trying to help Jack’s fits of insanity, angering him, and prompting a visit from Batman.

Meanwhile, actor Simon Trent is attacked in his home by a dark masked woman wearing 1920s style clothing and wielding a huge knife.

Analysis: The second issue in Katana Collins and Matteo Scalera’s installment of Sean Murphy’s Batman: White Knight universe continues with the smaller scale, introspective-focused story the first issue set up. Collins has a few weaknesses in plotting, as she tends to resolve fights or conflicts with cute coincidences, similar to sitcom writing (or romance novels). While sitcoms and romance novels are not in any way “lesser” to superhero comics or crime stories, mixing the styles can lead to jarring effects. However, those effects are often used well, as opposed to a few off-key notes. Collins really creates a mood through Harley’s perspective – giving us deeply emotional connections to her love for Jack, and the way she feels so lost in today’s world without him.

Matteo Scalera’s art continues to keep the White Knight universe at the top tier of visuals. Excellent storytelling and powerful, painterly linework make Scalera’s art really stand out from the “house style” and fit nicely in with Murphy’s defining sketchy but assured penciling. Scalera and Collins also make a key decision to keep Harley’s injuries from her brutal fight with Neo-Joker consistent throughout this issue, bucking the trend for perfect heroines even after violent altercations. That detail gives a texture and solidity to the conflicts that Harley goes through, despite the heightened realism of a mom who lets her kids ride hyenas. Together, Collins and Scalera have really continued the strengths of this miniseries into its second issue and leave the reader excited for the next issue.

Sean Murphy’s main cover with Matt Hollingsworth shows Glasses Harley as the main image, with Neo-Joker and Poison Ivy hanging out (literally, in Ivy’s case) on the side – a fun piece, again given a colder tone by Hollingsworth. Scalera’s cover, once again with a warmer tone – primarily deep forest green and washed out yellow/tan – highlights the old Hollywood feel of this mystery.