Warner Bros. has announced that the Harley Quinn animated series will be heading to Blu-ray next month. Up to this point, the series originally released on DC Universe before making its way to HBO Max with the recent change to DC Universe Infinite. While the series has been available through digital retailers, the first two seasons will be coming from Warner Archive.

The collection will include three discs with all twenty-six episodes from both the first and second seasons. If you haven’t been able to check out the show on the variety of locations it has either aired or been streaming, now is your chance to check it out. 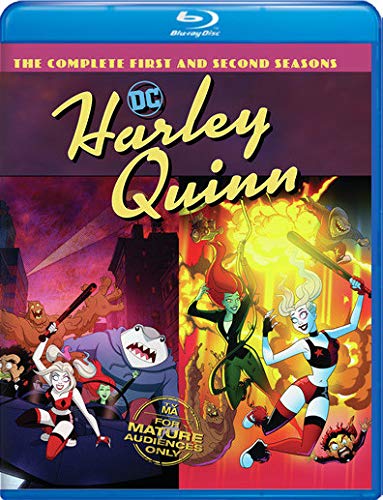 Harley Quinn (Kaley Cuoco) has finally broken things off once and for all with the Joker (Alan Tudyk) and attempts to make it on her own as the criminal Queenpin of Gotham City in this half-hour adult animated action-comedy series. With the help of Poison Ivy (Lake Bell) and a ragtag crew of DC castoffs, Harley tries to earn a seat at the biggest table in villainy: the Legion of Doom. Don’t worry – she’s got this. Or does she? In Season 2, Harley has defeated the Joker, and Gotham City is hers for the taking…what’s left of it, that is. Her celebration in the newly created chaos is cut short when Penguin, Bane, Mr. Freeze, The Riddler, and Two-Face join forces to restore order in the criminal underworld. Calling themselves the Injustice League, they’re intent on keeping Harley and her crew from taking control as the top villains in Gotham.

With a third season already ordered for HBO Max, now is the time to add the series to your collection. The Blu-ray set is set to release on February 16, 2021. You can preorder the set now over at Amazon.