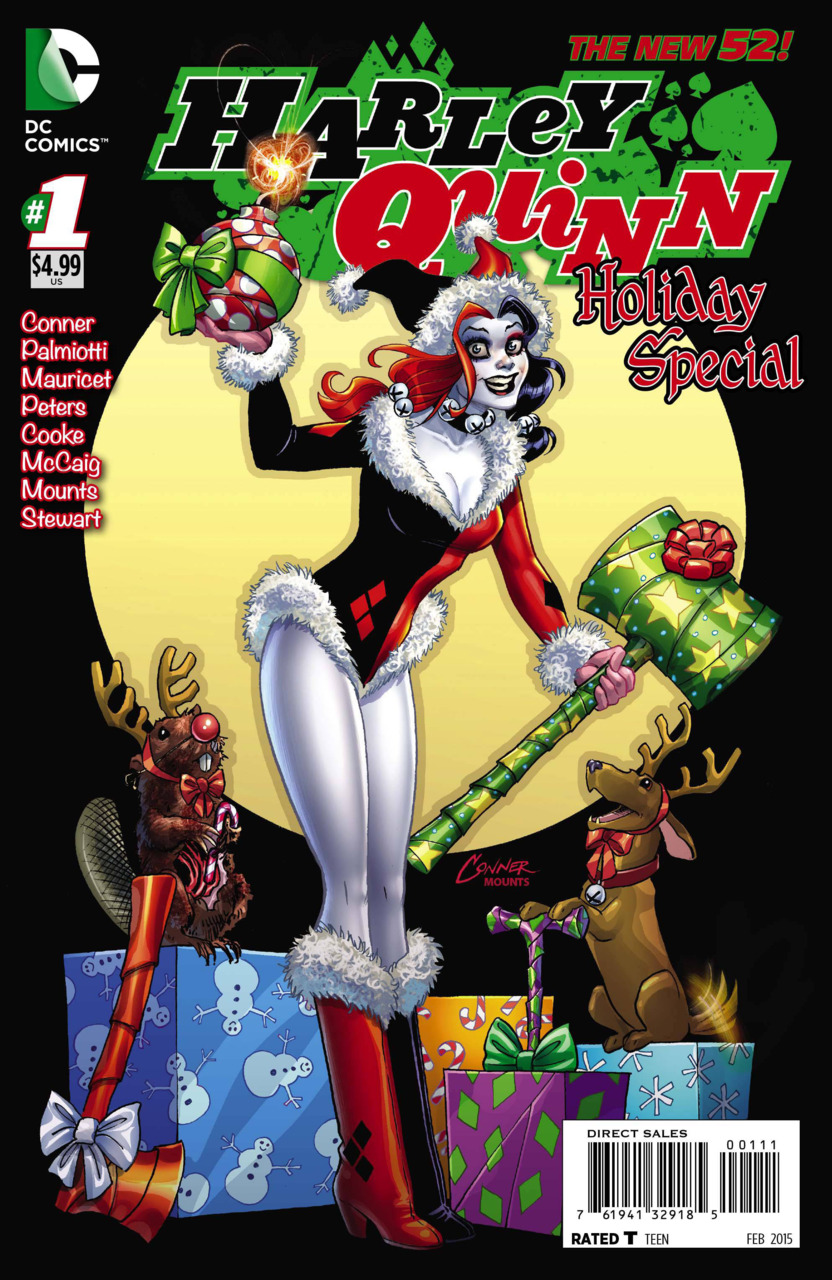 This past year with Harley Quinn has been full of twists, turns, and a plethora of surprises. Being a reader of this series since its inception I was less than enthused when I read that DC would be releasing a holiday special dedicated solely to Harley Quinn. Not only does DC not need a holiday special, this is hardly the character that could embody the holiday spirit. However, I was surprised to find that at the end of this issue I was filled with the holiday spirit and a deeper appreciation for the writing of Amanda Conner and Jimmy Palmiotti.

Penning a holiday special is increasingly difficult in the light of most media outlets being filled with holiday clichés and formalities. However, in this issue we are granted a glimpse into the preverbal holiday spirit as seen through the lens of DC’s favorite antihero, Harley Quinn.

The Haley Quinn holiday special is presented as an anthology of stories divided into three equal parts. Each tale deals with a specific theme that many people experience around the holiday season: forgiveness, irritation, and the passing of time. Having a different artist attached to each segment of the piece keeps the flow fresh and original throughout the entirety of the book.

In the first section of the issue we find Harley assigned as the plaything of a very entitled child. Although this entry started out slow it quickly picks up speed and lands the reader along side Harley in the middle of a broken home. It was refreshing to see Harley reverting back to her roots as a professional psychiatrist. This is one of the few instances in which we are afforded the opportunity to glimpse into the remaining fragments of Harley’s humanity. Using these techniques, albeit in an unruly manner, Harley is able to reconcile the broken relationship of a father and daughter. Demonstrating to the reader that love is the true core of the holiday season.

Harley’s next endeavor explores a topic reminiscent of nails on a chalkboard, Christmas music. Brandt Peters’ art direction is a fantastic break from the norm and is a breath of fresh air. His vision perfectly captures the ludicrous nature of the subject matter. Seeing Harley with a “humbug” trapped in her ear humming Christmas music is an easily understood frustration that many individuals have faced in their lives. I will be the first to confess that there are very few things in this world as maddening as having a song stuck in your head. Lighthearted and whimsical, this story is a great addition to this otherwise serious collection.

The third and final entry in the issue deals with a subject matter that has plagued man since the dawn of time, the passing of time. It is very infrequent that we see comic book characters confronting the idea of their own morality. In this instance it is a grey hair that has Harley questioning her remaining time in the universe.

In true Harley fashion, our heroine sets out on a quest to kill father time and live a life of eternal youth. However, she quickly learns that our time is not measured in the amount we have, rather, it is measured in what we do with the time we are allotted. Harley discovers the beauty in the cycle of life and the impact that a small act of kindness can have in the grand scheme of things.

Although many of the fantastical elements that make up the Harley Quinn series are present, this issue has more heart than most comics I have read in the last year. Fully capturing the holiday spirit, Conner and Palmiotti are able to explore many of the basic elements that make us human. A variety of artists add to the appeal of the issue, making it one that should not be missed this holiday season.