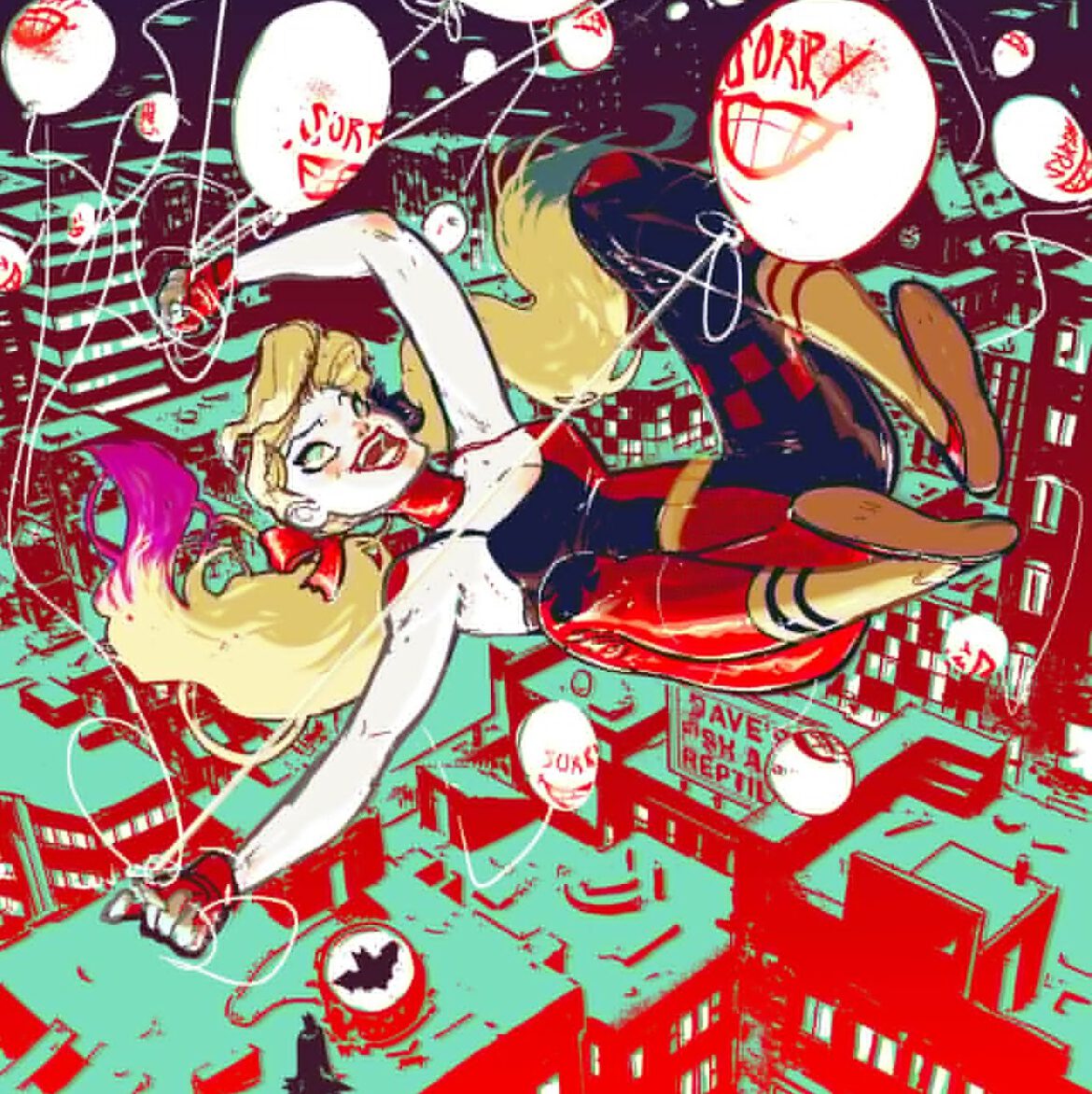 Overview: In Harley Quinn #1, Harley Quinn is adjusting to her new life (as part of? on the margins of?) the Bat-Family. She is missing Poison Ivy and trying her best but is struggling to make sense of things and find her path.

Synopsis (spoilers ahead): We open with Harley narrating over a (gluten-free!) cake she has baked with lettering that says “I’m Sorry” on top. She is dumped into the cake by an unseen force. It turns out the cake was for Killer Croc, who wants Harley out of his sewer (see the Harley story “New Roots” in Batman: Urban Legends #1). They banter as they bash each other, and Harley eventually concedes and leaves, musing on the difficulties of her new life in Gotham. She is trying to change, but Gotham is making it difficult, and she has visions of hurting some of the gawkers who jeer. She checks herself and trudges home as it begins to rain.

In her Little Santa Prisca apartment, she notices the window is open and eventually finds Batman lurking in the shadows. They chat, and Harley shows off her wall of amends, which features a networked map of some of the people she has harmed in Gotham. Suicide Squad officially cleansed her record, but she wants to do more, and Batman warns her that she can’t take any steps backward – not even for the envelope marked “Pam” that Harley is not yet ready to open. Before Batman leaves, Harley asks him for the “Bat-check” that she thinks members of the Family must get – or at least a novelty Batman toaster. Batman is not pleased but gets a call from Oracle and leaves immediately. Harley says she’ll catch up, and perhaps this is a tie-in with her huffing and puffing across rooftops in Batman #106.

At Amusement Mile, a crowd is roughing up a big man with a huge chin, which features a prominent Joker tattoo. Batman intervenes, and the crowd then turns on him. The man escapes into a funhouse, and Batman catches up with him in a hall of mirrors. Harley appears and reminds Batman that, of the two of them, only she knows what it is like to be manipulated by a mass murderer. Since she is also a psychiatrist, she wants to help, and Batman grudgingly acquiesces after he gets another call from Oracle. She and the big man, named Kevin, depart the funhouse together, with Harley relishing her new role in transforming her ugly duckling. Kevin, for his part, is surprised “The” Harley Quinn is now working with Batman.

Back in her apartment, Harley finds a novelty Batman toaster presumably left as a gift and begins to make her peace with her new life in Gotham. The scene switches upstate to a hospital for the criminally insane, where a man is hurrying down the corridor with a suit bag. The narration eventually culminates in a bald man representing Saint Industries, asking a “doctor” for assistance in ridding Gotham of all traces of Joker and in bringing order to the city. The doctor in question is Hugo Strange, looking enormous and almost Bane-like in the final panels.

It’s a fun choice, and it captures some of the liveliness of Harley Quinn in Infinite Frontier. The new creative team of Stephanie Phillips (writer) and Riley Rossmo (artist) brings a real sense of play to the antihero, and it’s nice to see. Given that Phillips also wrote the mini-prequel story in Batman Urban Legends #1, I was a bit surprised to see a pronounced difference in tone and mood here in Harley Quinn #1. “New Roots” is deadly serious, full of anguish and loss – a state which makes sense after Harley openly accepted the possibility of her death at the hands of Clownhunter in Batman #105. In “New Roots,” she finds herself alone in a sewer, lamenting the loss of Pam for reasons of which the audience is unaware. Yet Harley’s mood and tone is almost completely different in Harley Quinn #1, and I had thought the two narratives were part of the same arc (indeed, Harley Quinn #1 begins in what is presumably the same sewer in which “New Roots” occurs).

Harley is nothing if not changeable, but I love the intimacy between Pam and Harley, and like most readers am probably dying to find out more about what happened between them. I imagine later books will flesh this out in more detail, and I am certainly willing to wait.

Phillips does draw a somber note in Harley Quinn #1; Harley grapples with what it means to make amends and serve the forces of light. Gotham tempts her, as it does every member of the Bat-Family. Harley’s state mimics the position of the readers: She is liminal, in between, neither fully trusted as a member of the Bat-Family, nor willing to give in to her history and take up again as a Rogue.

As someone who really prefers Gothic realism with its sharp lines and deep shadows, Rossmo’s cartoony, somewhat Cubist style does not resonate. I like the literal, almost cinematographic representation of Harley in Stjepan Sejic’s Harleen. But I fully recognize that such an approach is arguably better-suited for the Black Label in which it appeared, and that Rossmo’s art is much more congruent with the way Harley was illustrated by Jimmy Palmiotti in DC Rebirth. In the current book, there is an especially nice panel that emphasizes verticality, as Harley shows off her considerable acrobatic skills in hopping right up to her (at least) fifth-floor apartment. This panel also nicely plays off her mood, as Harley is “up” at the end of the book, overjoyed with the gift Batman has left for her. This is a nice move for Batman, as he is not traditionally known for being the most encouraging and enthusiastic leader (cf. Nightwing).

Finally, I’m interested to see that Phillips has Harley herself explaining that she is a psychiatrist. It has never been entirely clear to me whether Harley is a psychologist (which in the US typically involves PhD-level training) or a psychiatrist (which requires a MD). Although both are behavioral health professionals, there are often considerable differences between the two fields, at least in the US. (For example, many psychiatrists in the US have moved away from talk- and psychotherapy in favor of medication and psychopharmacologic approaches. In contrast, psychologists do not traditionally prescribe medications, although there are some exceptions to this). This distinction may be of little consequence in the comics, but it is still interesting to note that the question has been directly answered in canon, at least for now.

I very much enjoyed Phillips’ Harley in DC Future State, and the opening issue of Harley’s own book is a lively start. I am drawn to the deeper emotional states for Harley, which the main book plumbed well at the end of the Ghost-Maker arc.  I look forward to seeing these explored further, but the dialogue with Batman is excellent, and this is a promising beginning.