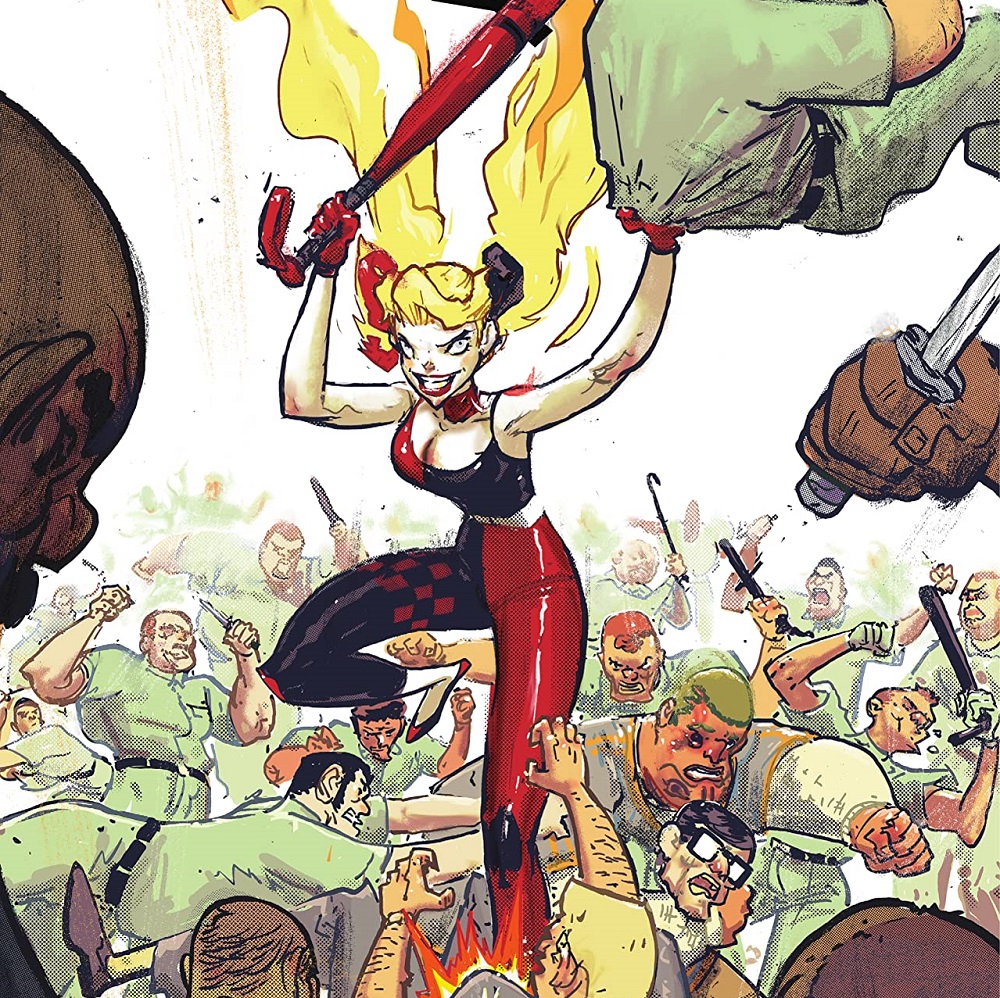 Overview: In Harley Quinn #2, Harley gets her coffee drink, chats with Kevin, and disposes of some of Hugo Strange’s minions.

Synopsis (spoilers ahead): Harley Quinn #2 begins in the present, with Harley musing that even her rigorous educational path to a PhD in psychology doesn’t prevent her from battling psychiatric orderlies advancing on her with cattle prods. Flashback to three hours earlier, and Mayor Nakano is giving a speech at Gotham City Hall. Nakano introduces an enormous-looking Hugo Strange as the head of Gotham’s new Secure and Fearless Engagement Program (S.A.F.E.). Harley wonders why every rogue in Gotham seems to get officially sanctioned second chances except her. Strange gives a speech in which he says that it is because of his past villainy that he is the best person to root out the clowns left after the Joker War. A news reporter begins to discuss the persuasiveness of Strange’s apology, and Harley is enraged, correctly pointing out to the TV that Strange never actually apologized for anything. She leaps up on the counter, bat in hand, but the barista threatens to call the cops. Harley is forced to leave sans mocha latte with extra mocha.

Kevin finds her in a bad mood, but she brightens when he says that he has brought her a variety of different coffee drinks. She eventually settles on the caramel frappe WITH whip and rages to Kevin about Strange and Gotham’s preference for his assistance over hers. Kevin stops to stare at a burned-out storefront, and he remembers that three months ago, he was the reluctant clown who torched the place. He was arrested when he refused to flee with the other malfeasants, as he was concerned that someone was still trapped in the burning building. Kevin expresses admiration at how Harley has turned to the light, and Harley gives him a pep talk as she squeezes into the store.

At a SAFE facility, Strange and his orderlies manhandle and then sedate a man in a straitjacket before questioning him about his activities. Just as he is removed, an assistant tells Strange that Harley has been sighted. Strange sends a team after her. The orderlies confront Harley and Kevin inside the store, but Harley dispatches them with ease, steals their keys, and departs triumphantly in their van with Kevin at the wheel.

Analysis: I love Harley and am willing to be patient to see where the new creative team takes her. But this is not the strongest book. There are a number of discordances and confusing elements in the story and art. In Harley Quinn #1, we learn that Harley is a psychiatrist. But twice in this book, Harley explains that she is a PhD psychologist. (To be clear, I think Harley’s narrative and backstory make more sense with her as a criminal psychologist than as a medical doctor, so I like this change. I just do not understand why it has switched in the space of a single book).

On page eight, we learn it is nine in the morning, but in the space of the same conversation, a panel on page ten is dark with streetlamps illuminated. Maybe Gotham in Infinite Frontier exists in some kind of infernal darkness?

There is not a lot of movement in the story. Harley gets a coffee drink, chats with Kevin, and beats up some rather pathetic, Quasimodo-looking orderlies. That is literally all that happens. Hugo Strange is supposed to be brilliant, but he thinks that a few of his low-level staff can take out Harley??

None of the Bat-Family appear in Harley Quinn #2, and their presence is sorely missed. I am trying, but I just cannot get there with Riley Rossmo’s art. I find the jagged, abstracted characters downright unappealing and difficult to connect with. Harley’s moony grins do her no favors, especially when the writing is so earnest in professing her attempts to do good and impress Batman. The art is even more difficult to accept when you see how awesome Derrick Chew’s variant cover looks. Moreover, why are so many shady characters in Infinite Frontier so enormous? Whether it’s Mr. Worth as seen in this week’s Detective Comics #1035, Blockbuster in Nightwing #78, or Hugo Strange in Harley Quinn, all of them look like Bane. Is this coordinated among the artists in the Batman Universe? If so, why? If not, it should stop, because Bane is Bane and only rogues with a canonical tradition of massiveness (Amygdala, Killer Croc, KGBEast, etc.) should look so large in my view.

I am curious as to why Simon Saint has positioned Strange in Gotham, and why Nakano is so ready to cede control to such a notorious rogue. Other than that, Harley Quinn #2 feels slow and small and quiet, which are not adjectives I would ever associate with Harley. I imagine things will pick up soon.