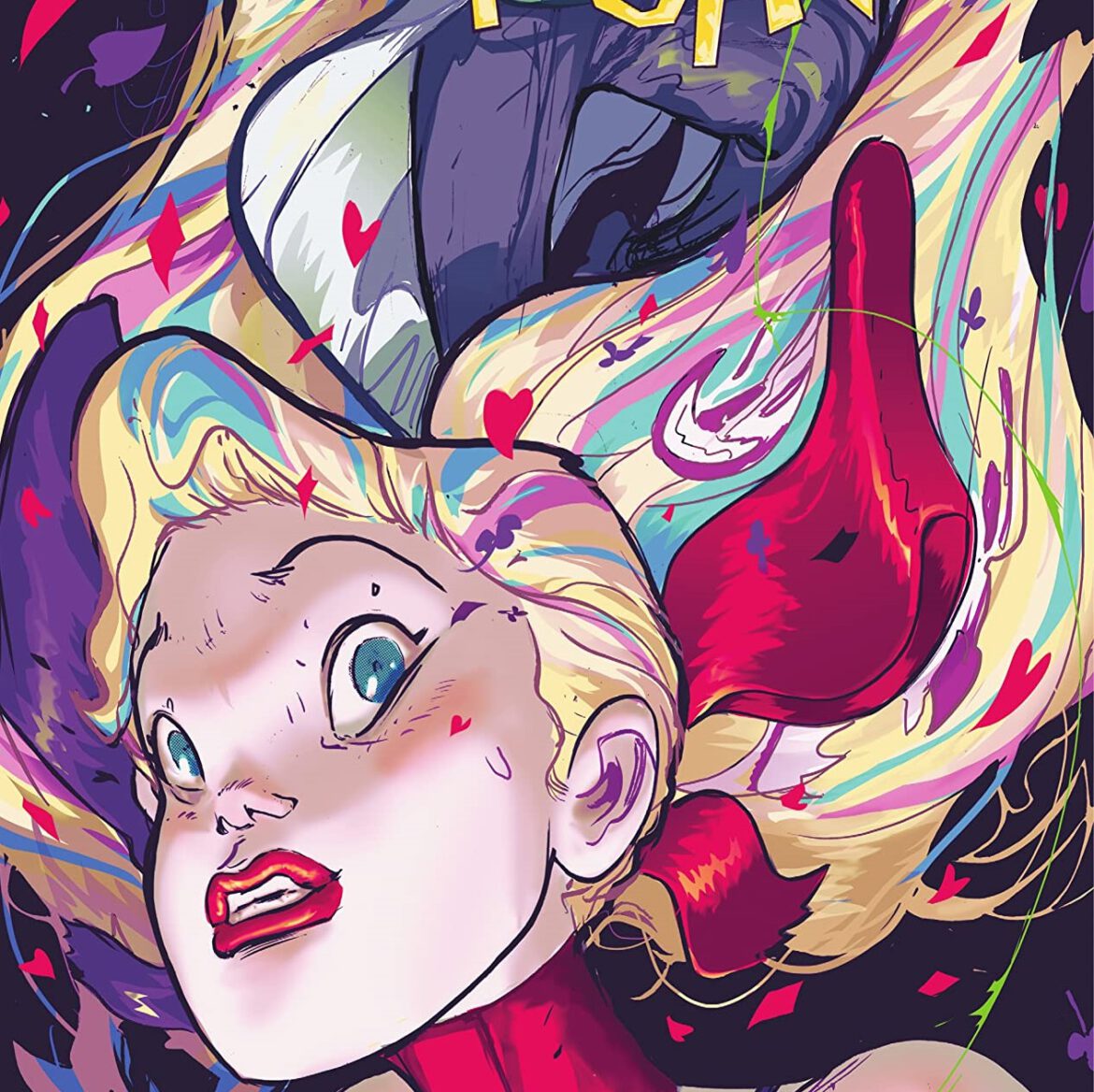 Overview: In Harley Quinn #3, Harley convenes her first support group for former Joker clowns. She battles Strange’s minions above ground and faces some of her own demons below ground.

Synopsis (spoilers ahead): Harley Quinn #3 begins at S.A.F.E. headquarters, Strange continues his infernal experiments on former clowns from Joker War. He is testing a new drug of some kind, but is not satisfied with the results and does not want to wait for further trials. He asks his chief assistant, Augustus Lockwood, if he is keeping tabs on Harley Quinn as ordered. Strange then orders Lockwood personally to bring her in.

Harley is remembering some work she did in graduate school on the subject of smiles; they are complex and are connected to a wide range of emotions, not all of them happy. Our hero is excited to host the first-ever Community Support Group for People Who Used to Work for A Homicidal Maniac in a Clown Costume. Kevin comforts her when no one shows up initially, and Harley reflects on the pity smile he gives her. Eventually, several people arrive, and Kevin is happy to point out that there are still donuts.

Harley struggles with where to begin, and eventually ditches her notes and begins to speak from the heart. The members are reluctant to share until one brave soul named Eric suggests that perhaps Strange is right and that the “clowns don’t deserve normal.” A second member agrees, and Harley realizes that this is Lockwood, who apparently spent time with her at Arkham. Lockwood reveals that he is working with Strange, and his reinforcements suddenly pour through the door. They grab the group members, including Kevin, and Lockwood urges Harley to leave the task of dealing with the former clowns to the professionals. Harley rebuts, noting that she is a professional and has a Ph.D.

The fight begins in earnest and Lockwood tases Harley. She comes to as she is being dragged to a van and begins thrashing Lockwood anew with one of the electrified cattle prods. The vans race off with some of the group members inside, including Kevin. Harley literally jumps onto the van with Kevin inside. Lockwood gives chase in the other van, and she takes advantage by leaping onto his van. Lockwood crashes the van and calls out, mocking Harley, who has disappeared.

Harley has pirouetted down into a sewer. She reflects again on the smile, remembering that Joker told her that she must always smile in part because it will hide to the world her true thoughts and feelings. She thinks of smiles with people in her life and the different meanings they conveyed: Joker, Ivy, Batman, Strange, and Kevin. In her musings, she walks straight into a large, solid figure. She thinks for a moment it is Killer Croc before she realizes that this is Solomon Grundy and that the complexity of smiles are not her immediate concern.

Analysis: Harley Quinn #3 is by a fair margin my favorite in the title thus far. Even Kevin has begun to grow on me; his loyalty, compassion, and faith in Harley is not only touching, but also reflects the posture of at least some of the audience: We too want to have faith in Harley.

Whereas the last issue felt small and quiet, this issue is explosive. Here in Harley Quinn #3, we see Harley at her dynamic best. Her fighting style reminds me of a brilliant top, moving almost too quickly to see in a blur of bright color, but entirely controlled of movement and purpose. I love that she leaps on the fleeing vans, which is not only visually akin to Batman, but is also narratively analogous since she does so to rescue her people.

In addition, this book is funny! Harley is full of excellent quips and rebuttals, practically toying with Lockwood intellectually.

While I do not care for Riley Rossmo’s cartoonish art, the final panels in the sewer are really well-done. The reflection in the water of the original Harlequin, combined with the ghosts above still haunting her steps (that Harlequin, Ivy, Batman, and Strange), is extremely effective. The reveal of Solomon Grundy surprised me at least as much as Harley, and I’m curious to see where this encounter leads our hero. How will she free Kevin? Where is Batman or other members of the Bat-Family in all of this? And what happened between Harley and Ivy?

You do not have to like Harley or believe in her attempts to be more than a “piece of human garbage,” but Phillips is writing Harley as a deeply complex character. I love Harley and think she deserves exactly this approach; the farther it moves us from #BubbleGumHarley, the better. (That Harley has a place in the Batman Universe as well, but not, I would argue, in her own main title). This complex, thoughtful, tortured, earnest Harley is also who we saw at the end of the Ghost-Maker arc in Batman, continuing the Universe-wide connectedness under Tynion and editor Ben Abernathy.

I feel quite fortunate to have a book of this quality for Harley and remain excited to see where Phillips takes her.

This book is dynamic, thoughtful, and funny: It is pure Harley.