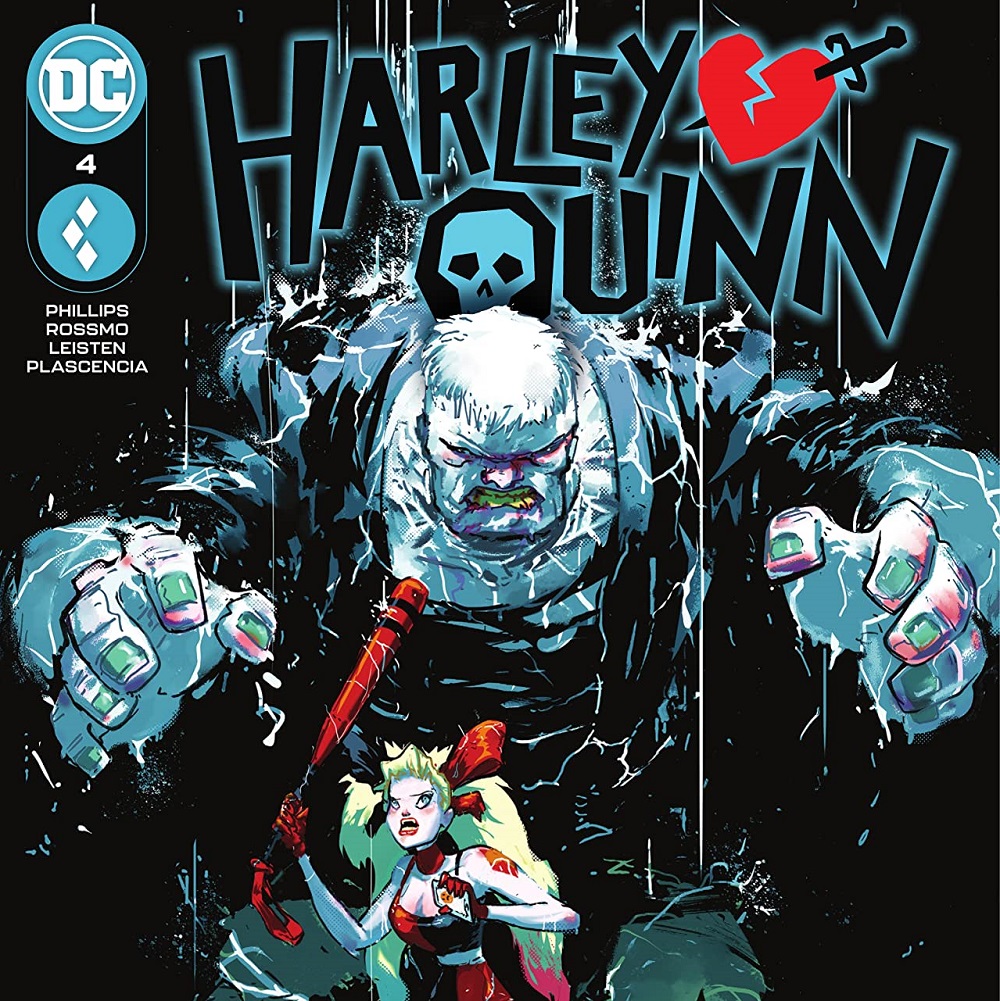 Overview: In Harley Quinn #4, fortified by Solomon Grundy’s sage counsel, Harley Quinn works at self-acceptance and rushes in to save Kevin.

Synopsis (spoilers Ahead): The scene opens in the sewer with a pleading voice. Harley and Solomon Grundy are battling, but over a game of chess rather than with their fists. Harley finds Grundy to be a good listener and admits that she is staying in the sewer in part to avoid dealing with the fact that Dr. Hugo Strange has “clown-napped” Kevin and many former clowns. Holding a discarded troll doll that doubles as her rook, Harley voices doubts about her status as a “good guy” and laments how much she has already screwed everything up including her near-death at the hands of Punchline, her failure to kill Joker, and most recently, the troll doll whose head she neatly snaps off. Grundy reminds Harley that she is, in fact, Harley Quinn. She realizes the significance of trying to be only herself, thanks Grundy, and rushes off.

At S.A.F.E. headquarters, Kevin and many other former clowns are restrained in straitjackets as Dr. Strange lectures them from a floor above (the roof of Kevin’s chamber is glass). Dr. Strange reminds Kevin of Harley’s many sins and murders, and Kevin concedes the point but states that people can change. Armed with a syringe, the villain advances on Kevin as he continues the debate, wondering whether people who are inherently bad can be reprogrammed. After his injection, Kevin begins to hallucinate.

The scene switches to Harley on top of a building with her trusty bat. She is nervous about using a grappling gun and nearly smacks the pavement before she arrests her fall. She reminds herself again that she is not Batman but is Harley Quinn and rushes off to S.A.F.E. headquarters. On the loading docks, Harley mimics Batman’s shape to cast a familiar shadow on the side of a truck, and Dr. Strange’s minions run away in fear. Harley enters the building and immediately hides in a dark room to avoid detection. The room turns out to be filled with caged animals presumably being used in experiments, vaporous green liquids in graduated cylinders, Bunsen burners, etc. An orderly finds Harley and challenges her, but she disposes of him quickly. More minions charge in, and Harley ducks into the nearest elevator, where she is quickly joined by five antagonists. They fare no better, and Harley enters a dark, cavernous room. The lights switch-on to reveal a looming Dr. Strange with a full syringe attended by multiple henchmen.

Analysis: Harley Quinn #4 builds on the momentum from the last issue and delivers the best of Harley Quinn. I am not an expert on the history of Solomon Grundy, but I’ve never seen the villain used quite this way as a positive force. It’s lovely to see that Harley neither judges Grundy nor treats him as a monster. Rather, she regards him as a fully-formed being, one worthy of respect, dignity, and converses with him as an equal. In so doing, she demonstrates the merits of being the best Harley she can be; such a person is praiseworthy in this regard, including by comparison with Batman and the Bat-Family, who do not necessarily have the best record of treating Grundy as humanely as Harley.

Writer Stephanie Phillips is just as interested in giving the readers a complex, fully-formed Harley. She will not let us forget about the evils Harley has wrought and uses the “reformed” Dr. Strange as a mouthpiece for reminding us and Harley that she has an enormous amount of work to do on the path to redemption – if such is even possible. Is Harley inherently bad? If so, can she be “reprogrammed?” These are fundamental questions for Harley, and her agonizing self-doubts are all too human as at the very least she seems committed to keeping her awareness of her past foremost in her consciousness.

I dislike artist Riley Rossmo’s style and would absolutely love to see Derrick Chew get a turn as his variant covers are spectacular. That said, Harley Quinn #4 features Rossmo’s most effective page of art in the book thus far, as the panels depicting Kevin’s hallucination are a spectacular homage to Batman: The Animated Series. I loved the representation of the original Harley Quinn and the purple-clad Joker, red in tooth and claw.

Harley Quinn #4 continues the dynamism, humor, and complexity of the series. If you like Harley, and perhaps even if you do not, the book is well worth the read.