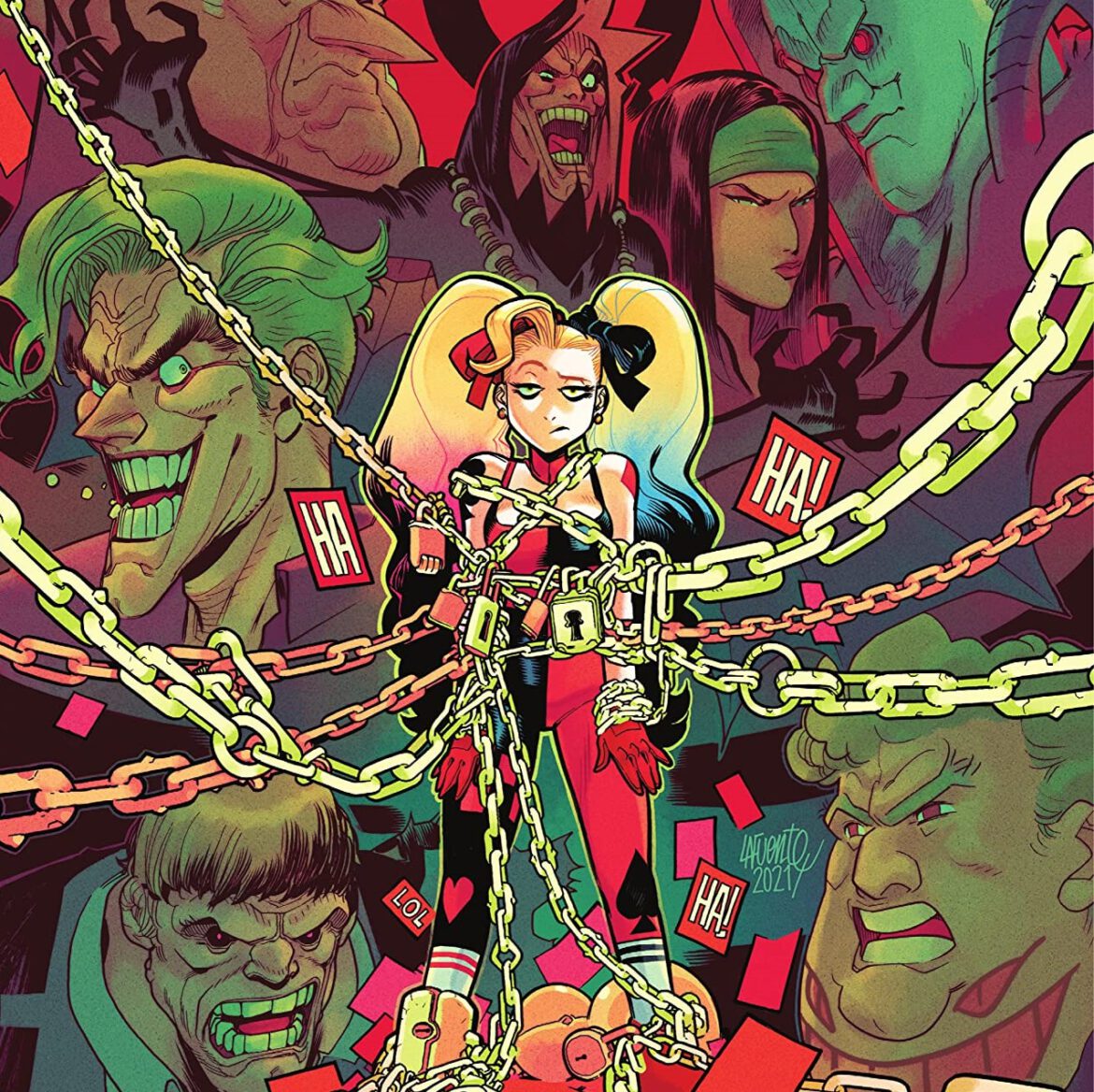 Overview: In Harley Quinn 2021 Annual #1, Keepsake takes Harley, and Kevin and Solomon Grundy must save our antihero.

Synopsis (spoilers ahead): As Harley Quinn 2021 Annual #1 begins, Solomon Grundy and Kevin are fighting Mr. Freeze. Blasted with ice, Kevin explains to Mr. Freeze that they are there to request help on behalf of Harley, who has been taken hostage by Keepsake. Mr. Freeze asks him to elaborate, Sparknotes style, and Kevin flashes back. He and Harley are hanging out in a skate park when Keepsake arrives. Harley is unimpressed and in response, Keepsake brandishes Penguin’s umbrella. He reveals himself as Eli Kaufmann and says that he worked for Joker until Harley fired him. Keepsake insists that she owes him a debt and demands that she have dinner with him.

Mr. Freeze is now getting into Kevin’s story and has made himself comfortable. Harley goes to dinner and demands that Kaufmann explain himself. Kaufmann says that he wants to take over where Joker has failed and that he needs Harley’s help. Harley is dubious, and Kevin, in poor disguise as a waiter, spills water on Kaufmann. The jig is up, and Kaufmann ends up blasting Harley and Kevin with Joker toxin, which he has appropriated as “Keepsake toxin.” When Kevin wakes up, Kaufmann and Harley are gone. He asks Solomon Grundy to help find Harley and they begin their search with Penguin.

Penguin explains that Kaufmann was in his hire, but that he fired Kaufmann for theft. He advises Kevin and Grundy to seek out Cheshire, who apparently has a special hatred for Kaufmann. Cheshire suggests they speak with Two-Face. They also speak with Riddler and Killer Moth, all of whom counsel that they confer with Mr. Freeze. Mr. Freeze indicates that Kaufmann has stolen one of Freeze’s guns, all of which have GPS trackers. But he refuses to help and Kevin, who is immobilized in a block of ice, freaks out and threatens Freeze with serious bodily harm. Mr. Freeze relents but warns Kevin the information will cost him.

Harley comes to; she is trussed upside-down in chains. Keepsake is there and he informs Harley that he has recreated ACE Chemicals for her. Keepsake tries to convince Harley that she is a villain at heart, and with so many other Rogues on the sidelines, the time is ripe for a takeover. Harley is disinterested and head butts Keepsake before shedding her chains and proclaiming that only she gets to define who she is. They fight in earnest and Keepsake warns Harley that he and Dr. Strange have somehow altered the former clowns on whom Dr. Strange was experimenting.

In the struggle, they both fall into the vat of green liquid. Keepsake surfaces, but the chains drag Harley to the bottom and she loses consciousness before Solomon Grundy arrives to save her. The vat turns out to have been filled with water that is dyed green, and Harley, Kevin, and Grundy share a hug in gratitude and friendship. The crew still has to fulfill Kevin’s promise to Mr. Freeze, which is that the three of them dress up and entertain at Mr. Freeze’s two-year-old niece’s birthday party. Harley and Kevin discuss how what distinguishes them from Keepsake is that despite their past with Joker, they wake up every day and try to do better. Meanwhile, Keepsake plots revenge.

Analysis: Harley Quinn 2021 Annual #1 is a fun romp that takes the time to explore more deeply the bonds between Harley, Kevin, and Solomon Grundy. Writer Stephanie Phillips manages to make this unlikely friendship touching without being treacly or inauthentic. Taken seriously, true friendship and its power is always a welcome motif (see, e.g., the entire Lord of the Rings), and I am finding the alliance both amusing and genuine.

I especially find a lot of resonance in-depth in the connection between Harley and Solomon Grundy. Has this Rogue ever devoted himself so deeply to another character in the Batman Universe? Grundy is nothing if not different, and yet Harley treats him with dignity and respect, as a full-featured being with feelings, preferences, and a desire for connection. The results are astonishing and, I think increasingly merit being regarded as an allegory for how social and human difference ought to be nurtured and supported. Therefore, the importance of the Harley-Grundy relationship cannot be overstated in what it signifies for Harley’s character growth. In her regard and compassion for Grundy, Harley is doing more than redeeming herself; she is exceeding the goodness and decency we expect from our heroes in TBU. Harley is becoming a good person before our eyes, and at least in terms of her relationship with Grundy, is behaving better than most in Gotham.

As I’ve noted before with Phillips’s writing, the book is genuinely funny. This helps lighten the mood; we cannot have any account of Harley in which she takes herself and her shenanigans too seriously. That said, Keepsake is a weak villain and the writer acknowledges it in a wink-wink with the reader. But in my view, it does not work well and Keepsake comes off as unworthy of Harley’s attention, which makes me impatient to be rid of him. As to the visuals, having three artists in a single book rarely is effective, and while there are no truly glaring discordances, neither does the art sing. I am still waiting for any of the art in Harley Quinn to come anywhere close to what Jiménez is doing with Harley in Batman.

Still, the annual shows off all of the many good qualities of Phillips’s run thus far with Harley Quinn. This Harley is dynamic, loyal, fearless, funny, vulnerable, brilliant, and strong. Kevin will voluntarily seek out a series of frightening Rogues and threaten Mr. Freeze, such is his devotion to her.

The annual doesn’t quite soar, but the narrative structure is effective and we get most everything that is currently working well with Harley Quinn.